Why was Dr Shakil Auj shot? 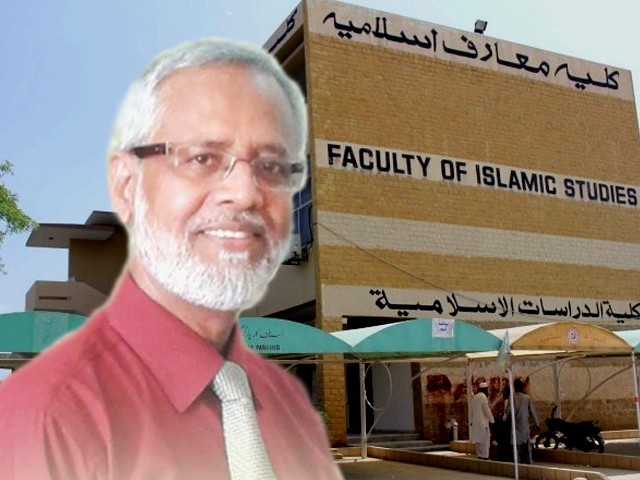 He spoke about the fabricated charges of plagiarism heaped on him, about people in the department who made no secret of their hatred for him, about the blasphemy charge on him, the abusive text messages and shameful slander.

A year ago, I began working on a small report about various Islamic Studies syllabi at public universities (which, unfortunately, never made it to print owing to some editorial bottlenecks). I rang up Dr Shakil Auj, the dean of the Islamic Learning department of Karachi University, and asked if I could bring some questions to him.

“No beta, I am very busy these days, maybe next week.”

I reached the Karachi University’s Islamic Learning department on a Friday morning. Not many classes are scheduled for Fridays. Girls, most of them heavily veiled, were perched on benches, reading from their notebooks. Hardly any male students were around.

I had known Dr Auj, but had never visited his office before. I asked a student to escort me. She took me upstairs.

This absence of protocol startled me. Usually outside deans’ offices, there is a secretary or two, who might glare at you in annoyance, ask you gruffly if you had an appointment, and call the busy professor inside on the extension phone to test your veracity. But there was nothing here.

I sauntered in unsurely through the door which was ajar. Dr Auj was unassumingly cordial. I wondered why he would meet someone like me so cordially – I, mere fresh graduate, a very junior person working for a newspaper who, incidentally, had pretty much forced this meeting on him. Most of the male professors in this department wore shalwar kameez, a topi, and sported a long beard. Dr Auj wore a suit, a tie and did not have much of a beard.

He broke the ice,

Some other students sitting in the office chuckled.

We talked about how the Islamic Studies syllabus had, or hadn’t, evolved over the years. We talked about how only some versions of religion are taught and others systematically pruned out. He told me about the many discourses on Sunnah that are weeded away from the curriculum – a practice which made for the well-spring of extremism. These were probably very juvenile subjects of discussion by his standards. The questions I asked probably sounded very naïve to him too. But not once did I feel patronised.

It was all very rare for me. Indeed, I am in no position to pronounce a verdict on Dr Auj’s scholastic calibre for I have neither the requisite academic training to do so nor a sufficient exposure to his classroom skills. But I’ll say this: I have never had such open and fulfilling discussions with a faculty member from outside my alma mater, LUMS. My silly little bias was instantly crushed and I felt quite ashamed.

Meanwhile, Dr Auj sent someone to fetch a few of Karachi University’s famous, uniquely-sized samosas for all of us. When they arrived, he spent some time praising the samosas – they seemed to be quite his favourite. He ate several of them and passed the platter around generously amongst the guests.

I wanted to know if students were schooled in inter-faith harmony in his department. What about inter-sect harmony? Had the syllabus been updated to account for the increasing extremism in today’s world? Is the university aware of the immense responsibility that rests on its shoulders?

“Inter-faith peace?” he took some time to laugh. “Beta, you are too simple!” he said, not unkindly.

“But surely, the university is the most opportune site for such discourse, given that madrassas are thought to be too radicalised now?” I wanted to know.

He agreed that it was so. He agreed that enough was not being done. He had borne the most horrendous consequences for trying to make the syllabus more progressive. The messages, the threats, the rumours, the murmurs – these were fruits of his struggle. Or were these a direct result of an equal regard and respect for Shia interpretations of faith? I forgot to ask him that. Dr Auj had always been held in high regard by several Shia scholars.

“They say I am trying to taint the pureness of faith”.

It sounded remarkably close to something the blood-baying enemies would say.

One usually can’t stop arguing with people who have grown old amongst books. People like Dr Auj, who were conferred a D Litt degree – the highest of academic honours which is even a notch above the PhD. Such people, who might have spent years tediously looking up an obscure source in books, come with a certain, common characteristic – they are patient and humble enough to listen to a person much, much younger than them give off half-baked opinions on matters they spend a lifetime studying. They correct you with a gentleness that betrays a firm respect for young minds that at least take the pain of asking questions. These are the people who, quite subconsciously, train us both intellectually and socially.

He was kind enough to ask the department clerk to fetch copies of the syllabi from years ago, marking the amendments with a pen for my reference. These copies are still with me, and so is his book on women’s rights, which had famously caused many to rile up. This society jealously guards its own distinct version of Islam. Those who say that women can offer namaz with nail polish on are not welcome here.

Back in 2013, sitting in his office, a young research student accompanying us, he told me about the death threats. He told me how some students cringed ostensibly in class owing to some of his views. He spoke about the fabricated charges of plagiarism heaped on him, about people in the department who made no secret of their hatred for him, about the blasphemy charge on him, the abusive text messages and shameful slander.

“Most of my students know all this, you can ask them – but don’t write this in your newspaper because it will make matters worse for me”.

Why wasn’t there an inquiry? Why wasn’t anyone deposed? Why, if at all, was Dr Auj’s name removed from the university website mere hours after his death?

I am a mere outsider to the grief of Dr Auj’s loss. If these matters are so sickening to me, one can only wonder the trauma that his students and family might be undergoing.

May his soul rest in peace.