Captain Shahid Afridi: Out with the new and in with the old? 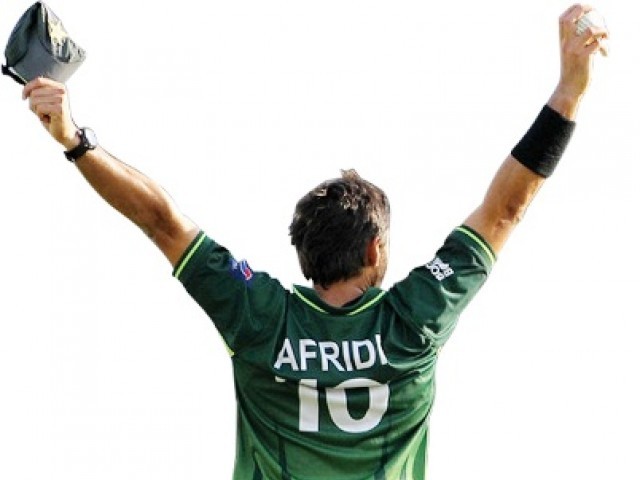 Afridi has been appointed T20 captain because he looks to be Pakistan’s best option but the problem with this is that it leave no place for grooming a future leader. PHOTO: FILE

On September 16, 2014, the stars once again aligned themselves for 34-year-old Shahid Afridi who was appointed as Pakistan’s T20 captain. It is believed that he will retain this position until the T20 World Cup in 2016.

The Pakistan Cricket Board (PCB), in true Pakistani fashion, has decided to adopt the ‘live for the moment’ mentality with absolutely no regard for the future of T20 cricket in the nation. What is the point of employing the same individuals in the same positions time and again and expecting different results? Was it a lack of better options that forced the board to make this decision and will it back-fire for the men in green?

Shahid Afridi has not led a side since 2011. Moreover, in the 19 T20 Internationals in which he captained the side, Pakistan won 8 and lost 11. Over the last year, Afridi has taken 10 wickets in 11 T20 internationals, and scored 173 runs. His form as a bowler has dipped considerably and unfortunately he will never attain any realm of maturity with the bat. He self implodes nine out of 10 occasions and gets going about once every other series and yet has the most loyal fan base a cricketer could hope for. There is no doubting his energy on the field or his commitment to the nation but every cricketer has their moment and Afridi’s time has passed.

When Mohammad Hafeez quit from his post as captain after the 2014 T20 world cup loss, it was like watching a tape on rewind. Every time the cricket team fails at a major world event, we do not look to groom and solidify a team for the future, we believe in putting bandages over bullet wounds to stop the bleeding. Hafeez, in my opinion, was better suited for the job. One man was not to blame for the performances of 11 other players. Pakistan never looked to rectify their mistakes and build for 2016, but to make radical changes because somehow that would fix the problem. It wasn’t the first time we had seen this and it definitely won’t be the last.

Shahid Afridi has been appointed T20 captain because, as it stands, he looks to be Pakistan’s best option but the problem with this is that it leaves no place for grooming a future leader. Many looked to Ahmed Shahzad as a potential captaincy option, believing that his religious preaching antics cost him the post.

In hindsight, Afridi has said and done several questionable things in his cricketing career, biting balls just being the tip of the iceberg. 2016 is two years away – that is two years the management could have used to build a team and groom a young captain. Are we simply afraid to let someone inexperienced take the reins? T20 is the shortest and most aggressive of all formats; is it really that detrimental to have a young, upcoming star attempt to take control? If not now, then when?

Pakistanis love going head to head with Indians in cricket. Here’s a thought, if the almighty MS Dhoni can attempt to groom Virat Kohli, why couldn’t the Pakistani board see potential in his twin (Ahmed Shahzad)? There is no doubt that he must learn professional etiquettes, that it will take time for him to grow but what is going to happen if we keep reverting back to the old? Once Hafeez, Afridi and Misbah all retire, in a span of a few years, Pakistani cricket will be leaderless and in shambles.

As it stands, the PCB has made its decision and one must accept that the glorified cheerleader is going to lead this nation in the shortest format of the game. With Waqar Younis back on the management side and their past history, one hopes that with time both have moved on. Only the 2016 World Cup will determine if the PCB’s decision has left the cricket team more sorry than safe.