Why do female supporters of PTI bother you, Maulana Fazlur Rehman? 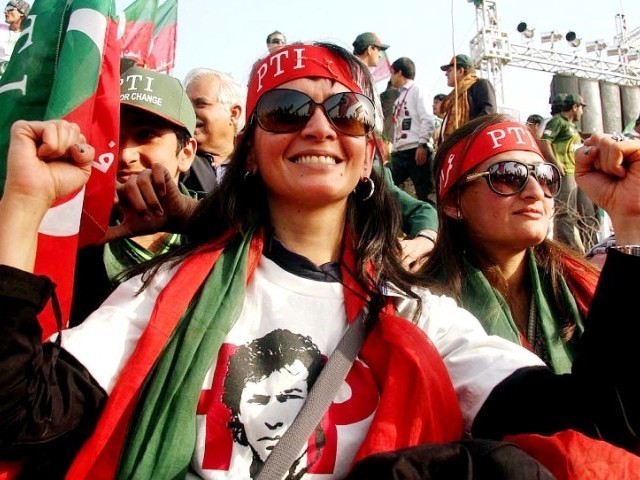 I have been working for PTI for a while now, and I can assure you that we know how to respect our women. PHOTO: FILE

I am your archetypical Pakistan Tehreek-e-Insaf (PTI) supporter. I am young, charged up, and me and my counterparts are the backbone of the “tabdeeli” you see around you, whether you agree with it or not. And one thing is for sure – working for PTI as a volunteer worker has just reiterated my faith in the fact that whatever men can do, women can do equally well or even better.

They also bring to the political arena an innate wisdom, just like my leader Imran Khan had said a few years ago in a television interview, and keeps stressing in his speeches. While Pakistani women have always been politically awake and Mohtarma Fatima Jinnah is the role model, followed by others, PTI mobilised women (as well as the youth) like never before.

Is that what has irked Maulana Fazlur Rehman and others like him?

Is that why they have started flinging the ugliest exaggerations and insults at our mothers, sisters and daughter?

Not just as a PTI supporter but as a Pakistani man, I am offended.

Recently, in the parliament, the Maulana described the PTI’s Azadi dharna’s participating women as having bad characters and labelled them as women from the dark side of society. Imran, in comparison, believes women and youth to be the biggest agents of positive social change and, hence, stake holders in the political arena.

This attitude points towards the Maulana’s insecurities and his panic at what is about to happen. The growing lack of respect in Pakistanis towards the parliament owes to such politicians who do not see the use of profane words and ideas as a violation of the parliament’s sanctity. They expect Pakistani women to stay silent when rights to education, health and a better life have been taken away. Taken away from us is our pride, our honour and the respect that once came with a Pakistani nationality. Men like the Maulana have taken it away from us. But no more.

According to the social and religious norms of Pakistan, and the constitution of the “Islamic” Republic of Pakistan, a woman should have equal rights. However, women in Pakistan face substantial amounts of oppression and refusal to the freedom they are entitled to. A society where the law is naught, some women are given the illusion of freedom while others aren’t even entitled to such luxuries and are taught to be slaves to the walls they have come to know as their homes. Restricted in a bubble of limitations, the average Pakistani woman is apparently the sole representative of the honour of the family. We turn a blind eye to immoral acts of our sons, while the girl is to speak when spoken to, dress how she is told and marry any man her parents believe to be “financially stable”.

Some Pakistani women, who learn to break free of the shackles the society has caged them in, develop a sense of ownership in society. These are women who have realised that they have a voice and the right to an opinion. These are the women that seem to intimidate the patriarchs. Enter stage left – Maulana Fazlur Rehman. The mind-set of Fazlur Rehman and his likes is drenched in patriarchy, and not in accordance with our religious teachings. Sadly, many unknowingly start believing their propaganda.

Islam does not take away a woman’s right to vote, does not forbid their participation in political activity and certainly does not need them to be silent in the face of oppression. But men like “Maulana” Fazlur Rehman, political men, who never really gave women enough respect to recognise their power, just cannot understand this. They cannot accept how women are peacefully protesting alongside men against nepotism and corruption, going to PTI sit-ins, chanting slogans and singing along to our national songs. They turn towards character defamation when they have nothing else to turn to.

I have been working for PTI for a while now, and I can assure you that we know how to respect our women. It is a strange feeling when my friends and I form a human chain, to protect our female participants who always sit in the centre of our dharnas. I have seen amazing, smart and inspiring women join us from whom we, men, have learnt a lot. I would encourage my mother and my sister to come here because the environment is so good. Contrary to popular scandals, there is no “dancing” of women going on except rarely when the crowd is very charged up. But, hypothetically, even if that were the case, why the moral policing? If they disagree with our political stances, they should counter that with solid arguments. How dare they talk dirty about women?

In a recent peaceful hashtag protest campaign, PTI’s women started the hashtag, #WeAreWomenOfPakistan followed by #RespectIsOurRight. Whether you are from PTI or not, it is time to silence the scandal-mongers and give Pakistani women the respect they deserve.

A young political activist, a PTI worker and currently a student at University of Hertfordshire, studying mechanical engineering. He tweets @zeyamalikhan (twitter.com/ZeyamAliKhan)