No need to run for your lives, there is no tsunami coming our way 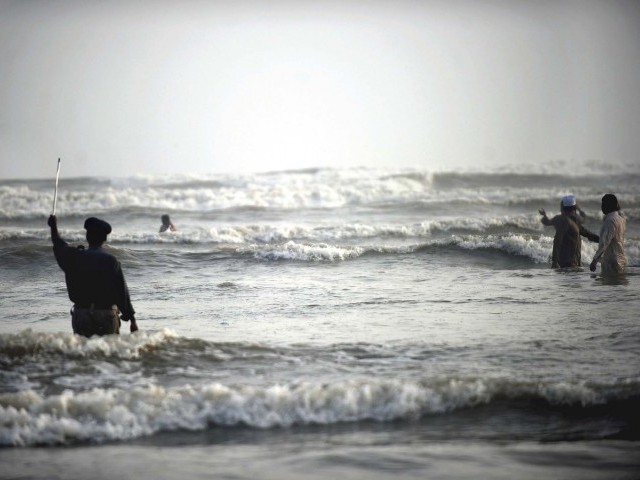 Tsunami warning mechanisms are all fine. However, the warning will travel from Indonesia to Pakistan and may give enough lead time to evacuate coastal populations. PHOTO: AFP

Hate me if you will, and I hate the sound of the words myself, but I have to say it. All the hype about Karachi being wiped off the face off the earth as a result of an earthquake measuring seven to eight on the Richter scale causing a tsunami is a big lie.

Why do I say this, when the media is all abuzz with reports of a Tsunami warning simulation carried out under United Nations aegis and participated in by the Pakistan Meteorological Department (PMD)?

Because if a seven to eight strength earthquake radiates its waves to Karachi, from the Makran Trench, Karachi would have been turned into a pile of rubble way before the Tsunami waves arrived at these shores.

The way the outcome of the simulation was presented in the media, it seemed that a tsunami was imminent and, of course, we had the spin-off packages on the electronic media. Some took the trouble of digging up the previous incident, when the wave was said to have killed about 4500 persons in 1945, and the water reached all the way to Saddar, though some old timers say it also went up the Gizri creek.

But that was Karachi then. Look at it now; one of the world’s largest cities with the highest growth rate and a population density exceeding 2000 persons per square kilometre. Can you even imagine the scale of the devastation of such a natural catastrophe?

Tsunami warning mechanisms are all fine. Pakistan, having almost a 1000 kilometre coastline, must stay in the loop of all the developments, like early warning centres. The warning will travel from Indonesia to Pakistan and may give enough lead time to evacuate coastal populations. But sceptics consider that to be a huge question mark, if one goes by our disaster response mechanisms, which are inept and inadequate.

Asif Nazir Rana, who had been associated with the Geological Survey of Pakistan (GSP) in Quetta, and is now the Deputy Director at Geoscience Advance Research Labs in Islamabad, says that,

“There is a clear and present danger of an earthquake on Makran coast triple junction. But there is no immediate threat of a tsunami on Sindh coast. Met Department carried out an exercise to check alert warning systems in case of a tsunami, which can be generated if an earthquake of M7 to M8 occurs in the Arabian ocean.

Mock drills should be carried out not only in Karachi but Quetta and Islamabad too, to tackle emergencies. But in a country where rain forecasts and monsoon floods are predicted many days ago and still have no preparations, how will we cope with unpredictable earthquakes?

It is true that once you have an earthquake of eight at the sea bed, a tsunami can be predicted and its path tracked and time to reach the coast calculated. But in every case, we are doomed to suffer due to poor infrastructure and quality of construction in all major cities situated on major fault lines.”

It is scarier still that not only are we going ahead at breakneck speed to build our cities in an unplanned manner in seismically vulnerable zones but we are also locating assets like nuclear power plants in those very zones.

Arif Belgaumi, an architect who has become a vocal activist on such issues, is even more scathing. He says,

“I believe the only reason this exercise is happening is because the UN is coordinating it and our Met office is getting financial and technical assistance.

There is no indigenous effort to respond to seismic risks in and around Karachi. It is very easy to say a tsunami will wipe out Karachi; now we even have an alarm to give an hour’s notice. But what will we do then, other than run for our janamaz? There is no evacuation plan, or anything.

The greater risk is of an earthquake that is land based and flattens the city. The tsunami threat is only in vogue because of the 2004 tragedy. We have had three earthquakes in the Balochistan region west of Karachi in the last four years, which have all been comparable in magnitude with the Kashmir quake. We need to wake up and take up the grave issue of uncontrolled, unplanned and unregulated construction in Karachi. The city is a ticking seismic bomb.”

So the same questions, which were asked by the concerned citizenry when the plan to build two new nuclear power plants, K2 and K3, were revealed, are valid in this case. What is the disaster management plan for Karachi? If there has to be a mass evacuation, then where will the people go? What are the arrangements for them?

The answers, of course, are also the same.

Even if we leave the issue of earthquakes aside for now (as it seems too improbable because it is unpredictable), what about the other kind of ‘sea action’ that demands a response?

We all know that the debate over climate change is over. It is happening right now. Sea level rise is one of its consequences. What have we done to prepare for it? Or if the right word is to be used, how are we planning to help the coastal communities ‘adapt’ to it?

Maybe the media should start asking the right questions from the right people. Alarmist packages, with sensational copy and visuals, are just a few minutes thrill, which may spill on to the topic trending on social media for entertainment. But what about the other two mandates of the media – advocating for education and information?

So please, the bigger danger to Karachi is its urban planning, or rather the lack of it. That will be the reason for Karachi’s annihilation, much before any tsunami. While praying to God to keep us safe from such calamities, let us also send up a prayer to Him to give us some sense of planning too.