10 things Pakistani and Indian drama industries need to do 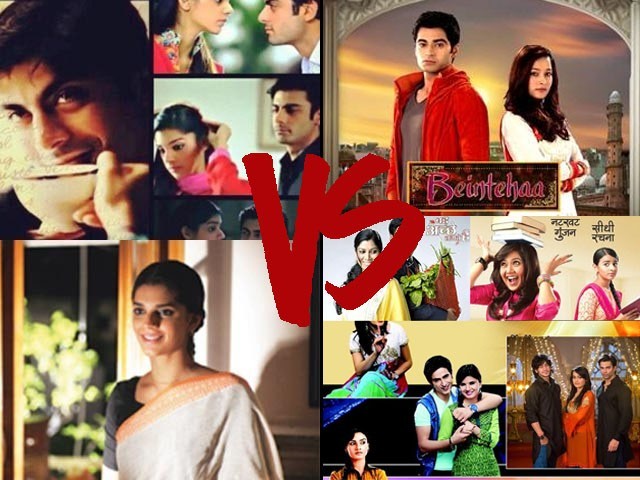 I sometimes wonder if this new movement could allow for more collaborative work from people on both sides of the border. It would make for some fascinating viewing and perhaps more understanding.

Pakistani dramas are suddenly all the rage across the border yet again. Indian actors like Paresh Rawal, Kajol and Javed Jaffrey have praised them as a new channel, Zee Zindagi, is playing the best Pakistani dramas for Indian audiences who are happily lapping them up.

There was always a cross-cultural exchange between India and Pakistan, but with the Pakistani film industry in the doldrums, and the Ekta Kapoor-style serials’ overwhelming popularity, it had become a one way street. Before this channel arrived, Indian fans, and indeed the entire sub-continental diaspora, used to watch Pakistani dramas over the internet just as we all once used to watch VHS copies of Bollywood movies.

I had enjoyed a few Indian dramas earlier, like Kusum and Jassi Jaisa Koi Nahi, but dropped them in disgust at the unending twists and turns that never brought any change in the characters or their lives; but after hearing the collective sigh of relief heaved by huge swathes of Indian drama fans at the return of good Pakistani dramas on online drama pages and websites, I decided to check out a few of the latest Indian dramas to find out why.

One of the recent hits across the border is Be intehaa which seems to be in some way inspired by Humsafar. Set in a Muslim family, where the hero, Zain, is forced to marry his “from-a-simpler-background” cousin, Aliya, on some traditional deathbed blackmail. However, the resemblance between the two dramas ends there.

While, in Humsafar, we first saw Asher walking quietly behind his father off to visit his sick aunt, in Be intehaa Zain first appears on screen shouting from a helicopter, about jumping into some stranger’s wedding so he could convince the bride that the groom was having a gay affair with him.

Aliya is your traditional Muslim girl, cycling down a busy main road in a bright yellow outfit leftover from a mehndi. In contrast, poor Khirad could only afford cotton and, that too, was hardly noticeable as she cooked and cleaned and tutored children with her mother to make ends meet.

The way characters are unfolded in Indian and Pakistani dramas is poles apart.

Similarly, another show, Kumkum Bhagya, is about two middleclass sisters in love with the same man. Sound familiar? No, stop right there! It is not their neighbour, relative or colleague but a millionaire rock star who causes the rift. Sorry Faisal from Maat, you just can’t compete with that.

While Saman and Aiman’s mother worried about making ends meet, these girls from Kumkum Bhagya have a mother who wakes up each morning to blow dry and pinup up her hair with a bunch of fake flowers before she makes the parathas.

The gap between the two ideas is huge and though it may just be a case of different styles, or it may just be that people want an alternate to the hyper sexuality and surreal wealth shown in Bollywood movies and Indian dramas, which they find in the form of our Pakistani dramas. They wish to see normal people on screen, dealing with difficult, sometimes unsolvable problems.

I sometimes wonder if this new movement could allow for more collaborative work from people on both sides of the border. It would make for some fascinating viewing and perhaps more understanding. I think that there are many things that both industries can learn from each other. Here is a list of a few possible ideas:

1. A story needs a beginning, a climax and an end, otherwise it just becomes an endless cycle of repetitions

2. Simple and innocent do not mean gullible and naive. These characteristics cannot be translated on-screen as unnatural head-bobbers, fixed wide smiles and strangely dilated eyes.

3. Stop choosing your colours out of a five-year-old’s crayon box. Primary colours have a time and place; give other colours a chance.

4. Stop using plot twists based on elaborate schemes that only a criminal mastermind or Niccolo Machiavelli would use. Normal people are just not that clever.

6. Love is not earned; it is a gift freely given

7. Women have honour; if they are abused, maltreated or disrespected, they can speak up and ultimately leave. They do not have to spend a lifetime proving themselves worthy to some man so he can appreciate them.

8. Credit your audience with some intelligence and allow a character to make a significant move without drum-rolls playing in the background. Allow your talented actors to actually act the emotion, instead of making the director of photography do all the work.

9. You have talented writers; allow them to tell real stories about the real world around them. Drop the Disney act.

10. Enough with the forced ‘cute’ characters. Watching an Indian drama is sometimes akin to drowning in a vat of sugary syrup. It isn’t working. Sensible and normal is so much better.

1. Get an editor. Long, drawn out scenes where the characters sigh and give each other significant looks which the audience is left to decipher should be used with scrupulous rarity.

2. Get over the two wives formula. I mean seriously, this topic has been done to death. Contrary to our drama makers’ beliefs, watching two screeching young women fight over a middle-aged man is mind numbingly boring.

3. Suspicion is not the most common reason for divorce. There’s money, interfering in-laws and a whole lot of other factors. Try focusing on them too.

4. Get some lights: this is a special message for A&B productions, please buy some lights. Oh, and while you are at the store, some make up too.

5. Stop stretching serials till you ruin them. 22 episodes are enough for anyone.

6. Give talented young people a chance. Just because so and so has been hanging around since the age of dinosaurs and they knew your father’s cousin’s mother does not mean the audience has to put up with them.

7. The handful of incredibly talented directors is one of the biggest reasons Pakistani dramas are suddenly on the map. Nurture their creativity instead of making them compete, or undermining them and pushing them down.

8. Pay your writers better. Pakistani writers are the other reason Pakistani dramas are reaching such heights of excellence. Appreciate them for their work. Allow them to write with depth and nuance instead of demanding the same mazloom aurat and love triangle themes every other day.

9. While everyone understands the need for actors to work, it has become a joke how actors mix up lines and characters because they are on so many different sets. At least get better continuity and some software that can dub out their lines so the entire scene isn’t ruined.

10. Stay authentic. Despite all the cribbing and complaints, there is a spark of brilliance and talent in the Pakistani entertainment industry which cannot be suppressed. Let it shine bright.

Both Pakistani and Indian drama industries have created amazing dramas but both still have a lot to learn. Here’s to hoping that our dramas become better and we are able to have a cultural exchange where both parties mutually share good quality content and advice.

The author is a free lance writer, an unserious fan of dramas and films but most of all an observer . She is always looking for an amusing diversion and luckily other people are always willing to provide one. She tweets as @Tomtomatoe (twitter.com/tomtomatoe) She blogs at SadafSays.com

Should we look forward to Nasir Khan’s Bachaana?

Will ‘Mera Naam Yusuf Hai’ be better than ‘Pyare Afzal’?