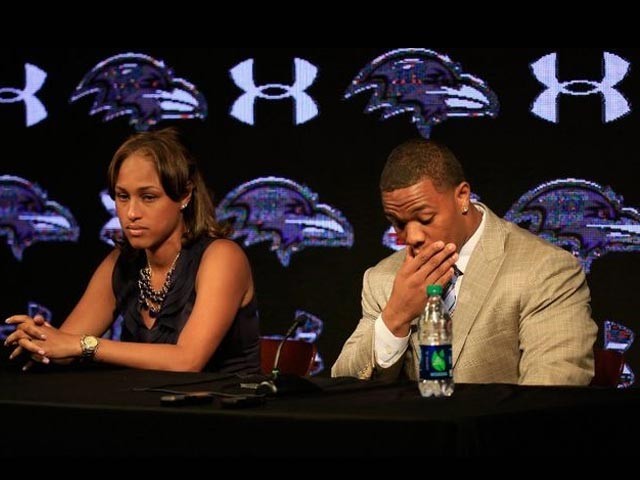 The news of Janay Rice lashing out at the media for releasing the video and advising the media to mind its own business made her look like an even bigger culprit than her husband. PHOTO: AFP

When the disturbing video of National Football League (NFL) star, Ray Rice, beating up his wife in an elevator, after knocking her unconscious and dragging her out, surfaced in the media the harrowing narrative of domestic violence remerged with all its might and force. And the news of Janay Rice lashing out at the media for releasing the video and advising the media to mind its own business made her look like an even bigger culprit than her husband.

It’s a common example of how the victim is demonised and morphed instantly into a culprit, if she does not fit our tailored standard of sham courage. Media pundits conveniently passed the judgment of her being responsible for marrying and staying with such a man, bringing this trouble on her. She was also dubbed as an ‘opportunist’, who is compromising her self-respect for wealth, luxury and fame. Everyone let the oppressor rest and focused their attention on “why she stayed”.

But during this fateful episode, something great happened; all the battered women came out and voiced their empathy through the hashtag #WhyIStayed where women they shared heartfelt stories exposing the lopsided patriarchal society. The hashtag has a universal appeal; it tells the story of every woman, beyond the barriers of race, age, gender and social privilege.

Domestic violence is the most underrated crime in our society which is so inextricably woven into our social structures that most of the time the victims accept it as normal parts of their lives. Just like Janay Rice, no woman wants to face the humiliation of baring her scars to even the closest friends and family. We conceal our scars, sometimes under rouge, sometimes under our dupattas and most of the time behind fear and tears.

#WhyIStayed it was a slow, calculated process but he chipped away my confidence, thoughts, friends, family, life..til it was only him.

The physical scars are tended and taken care of, but the soul bears the brunt. Ripped of love and respect, the soul is tattered to bits and pieces. If we start a #PakistaniWhyIStayed, then the first response would be: children; which is ironic because children, being the victim of violence against their mother, might not grow up to be healthy individuals. Patrick Stewart witnessed domestic violence as a child and wrote a beautiful piece about how it affected his whole life:

“This violence is not a private matter. Behind closed doors it is shielded and hidden and it only intensifies. It is protected by silence – everyone’s silence”.

#WhyIStayed The emotional hold/ threats affected my children, his children, & others. Too scared to leave- the unknown was worse.

Another important Pakistani reason of clinging on to a failed marriage is economic dependency.

“Ok get out of my house then.”

#WhyIStayed I was 18 with a newborn and limited resources. Whenever I tried to leave, I ended up with another injury.

This is a shut up call that husbands know very well would hush their spouse like a magic wand. Having no place to go to, she would obviously want the argument to be safely closed and would return to the so-called safety of her home. Now this is something we all need to work towards, instead of collecting dowry money for our daughters we must empower them with education. She must never stick to a doomed marriage because she can’t survive independently. In addition to our daughters, we must never give up on life ourselves. We must keep improvising our educational qualification and discovering our skills.

The third biggest reason to stay is hapless love, fear of the unknown and habit.

Sometimes women waste their life under the illusion of love. We think that the person needs us; as is the case with most partners facing violence, they end up crying and asking for forgiveness after every brutal episode. You can’t play messiah at the cost of your own self-respect. And something so negative can never be love. And just because it may seem ‘comfortable’ does not mean you have to settle. We must learn to hover out of our comfort zones because living in a cocoon of fake safety and shelter numbs us into the habit of putting up with violence. We are always afraid of what lies beyond.

Whatever it is, it can never be worse than this.

Today I felt incredible support from people I have never met. The world can be really beautiful sometimes. #whyistayed #whyileft

Domestic violence is a highly sensitive issue, where we all know the black and white but the ground reality lies in the grey areas behind the closed quarters. We cannot absolve the guilt of social inequality by chastising the oppressed for her inability to move away from the volatile situation, unless we purge the society of its gender-bias and taboos.