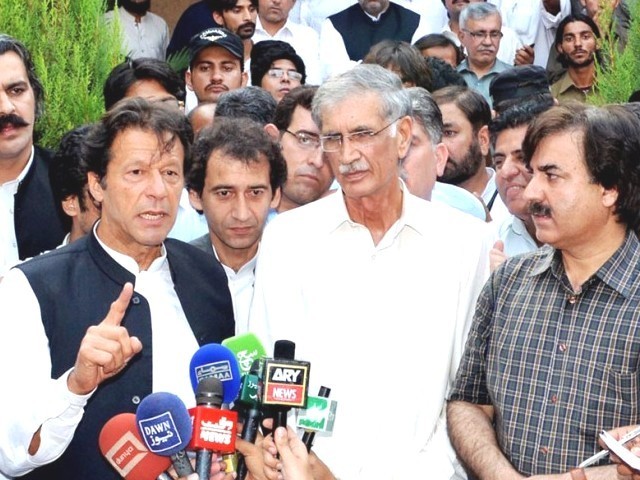 They have not only paralysed the capital, but also ignored their responsibilities as government employees towards the people of K-P and Fata. PHOTO: ONLINE/FILE

Sikhs have been living in Pakistan since the 19th century when Peshawar and Punjab were under the rule of Ranjeet Singh. While many other minority communities left Pakistan after the partition in 1947, a number of Sikhs stayed back and considered themselves safe in Khyber-Pakhtunkhwa (K-P) and the Federally Administrated Tribal Areas (FATA).

However, after the recent killings, the scenario has changed.

The enraged community felt the need to take Harjeet Singh’s dead body to the Azadi March as a protest against the Pakistan Tehreek-e-Insaf (PTI) led K-P government. Due to this march and their ‘preoccupation’ with having the prime minister resign, there were no PTI officials’ present in K-P. Unfortunately, the K-P police intervened and stopped the community from heading to the Islamabad march.

This is not the first, or the only, example of the provincial government’s neglect. When PTI started their Azadi march in mid-August, K-P was facing a rain spell that killed over a dozen, and left hundreds injured, in Peshawar. During this calamity, Khyber-Pakhtunkhwa Chief Minister, Pervaiz Khattak, was seen dancing on the Azadi March container. Yes, dancing. Even though the opposition criticised this and questioned why Khattak’s visits to Peshawar were so short, the K-P’s Assembly Speaker, Asad Qaiser, attempted to neutralise the situation by visiting the injured in the hospital.

Since Imran Khan started his march against the status quo, the K-P government officials have been staying in Islamabad. They have not only paralysed the capital, but also ignored their responsibilities as government employees towards the people of K-P and Fata. The processing of important paper work has also been delayed and is pending due to the unavailability of the concerned ministers. After the criticism and uproar, PTI parliamentarians started visiting K-P again. But, observably the number of participants at the march decreased. To balance this issue, these parliamentarians started showing their strength by bringing workers along back to Islamabad, instead of giving attention to constituency problems.

At the beginning of operation Zarb-e-Azb, approximately one million people from North Waziristan took shelter Bannu district in K-P. Initially, Imran Khan and the K-P government showed enthusiasm and resolve with regards to helping the IDPs; they even celebrated Eid with them. These IDPs were permitted to stay in government schools but soon after they were vacated by the K-P government with no place to go. Thankfully, the Chief of Army Staff, General Raheel Sharif, has paid regular visits to these camps.

If we look into PTI’s 2013 election campaign, it is common knowledge that the party spent most of its time and effort in Punjab because the bigger the province, the stronger the influence. But they won in K-P, whether they liked it or not. And now they have a duty towards the wellbeing of the people of K-P – this was the time for PTI to deliver and make K-P a role model for all the other provinces. Instead, all they have done is spent valuable time conducting protests and marches, affecting, adversely, not only the state but also the people.

The people living in K-P and FATA are sick of being sidelined over and over again.

So, in this time of great desperation, we appeal to Imran Khan and PTI to put an end to our plight. We do not care what your duel with Nawaz Sharif is about – we have no concern with any of that. All we are requesting is that you do your job. Bring back our elected representatives and let them do their jobs! We are tired of feeling the brunt of your politics and if you are not interested in K-P, resign from the post and give way to those who do want to do the job. We have been suffering from militancy for far too long and if there is little peace to be restored here, the least you can do is free us from your fight in Islamabad.