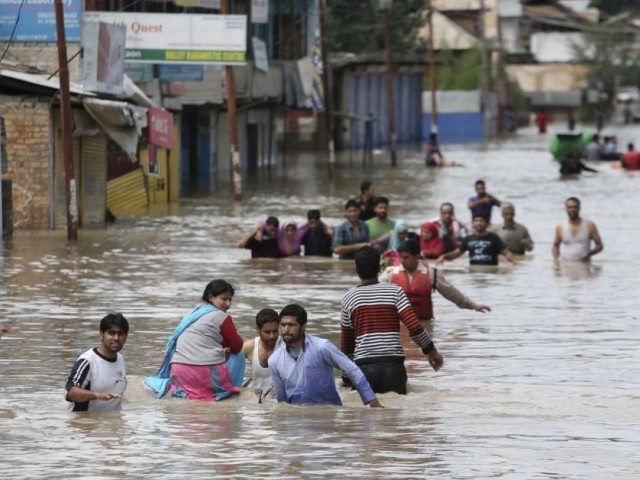 Kashmiri men evacuate women and the elderly from a flooded neighborhood in Srinagar. PHOTO: AFP

Kashmir is battling the worst of times in its living memory. A flood that has inundated half of the valley is causing unimaginable devastation, yet the hyper-nationalist and jingoistic Indian media has made the so-called rescue operations by its army the centre of its attention and coverage.

“Army and air force are risking their own lives to save lives in #JKfloods. Separatists who have only abused the fauj should feel chastened now,” tweeted the cheerleader of India’s broadcast media Barkha Dutt.

Army & Air Force are risking their own lives to save lives in #JKfloods. Separatists who have only abused the Fauj should feel chastened now

Having been accused for her involvement in one of India’s biggest corruption scams, the 2G spectrum, the prime time journalist has the shameless guts to ask questions and pose a serious face.

The rescue operations, if at all, carried out by the Indian army, according to people on ground, involved in evacuations of locals voluntarily, is restricted to the outskirts of the Srinagar city only and on selective basis. In South Kashmir, the entire rescue and evacuation was done by the locals themselves. Yet the self-congratulatory media is all praise for the Indian army that is cherry-picking its own people and sending them to safer places.

NDTV and CNN IBN, India’s two leading English news channels, have stooped to the lowest ebb and brought disgrace to the idea of journalism. Instead of focussing their attention to the relief and rescue, they have been constantly equating the actions of the Indian army with Kashmir’s integration with India.

NDTV on its prime time show, The Buck Stops Here, discussed the topic “Armed forces at heart of rescue – a turning point in Kashmir” where the panellists and moderator were all praise for the army and how their efforts would integrate Kashmir with India.

CNN IBN’s report titled “Kashmir floods: Defence forces’ heroics expose separatists, ‘intellectuals’” crossed all barriers of stupidity and absurdity. According to this report “the defence and security forces have emerged as the saviours of the people” and that the “hated Indian army is doing commendable job.” The report says that the army has reached the “remote corners of the state with rescue,” which is a complete fabrication as only the central and large parts of Kashmir are flooded. Also, the report has the intelligence and rationale to say that “separatists are safe in their flood-proof houses”.

CNN IBN hopes that that the heroics of its army will change the perception of the local Kashmiris, thereby explicitly giving its efforts (I repeat, if at all any) a political colour. By that logic, the people of Pakistan, who are also battling a similar situation in Punjab, should change their perceptions about India and its army because the Indian prime minister offered them help. Also, the people of Kashmir should feel the same about Pakistan and its army as their prime minister offered help to flood-hit Kashmir.

The propaganda, that the Indian forces are helping in any way is blasted by the fact that these forces were stoned in Kashmir and asked to leave. According to the locals, the forces are taking out their own people and not the stranded rescuers. This is largely true. With such dense and huge deployment of forces in and around Srinagar the statistics would normally suggest that the rescue should have been over by now. That thousands are still stranded is indicative of the fact that the so-called “saviours” are doing nothing. However, the Indian media, with their reporters, chopper-riding and taking aerial surveys, are busy issuing certificates to their army and trying to absolve them of their war crimes in Kashmir.

Social media is the only platform that has been of immense help in this crisis. People on ground have been providing updated information about all the people they have rescued. In the name of help and rescue, the Indian media has been copying all the information and pasting it on their websites and attributing it to the government and security agencies to further their propaganda.

A ground report from Kashmir by one of the voluntary rescuers presents a grotesque picture of the state of affairs. The report posted on Facebook reads,

A journalist, Sameer Bhat, who is in close contact with people on ground, presented the gravity of the situation in the most explicit manner possible. 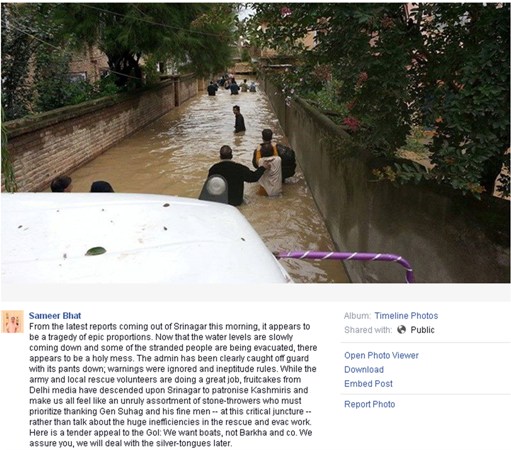 But help does not seem to arrive from anywhere. The little that people could save and put into relief, food, water, and whatever people from areas like Sopore, Baramulla, Bandipora and Ganderbal had managed is running short. According to Kashmir Monitor,

“Relief shelters running out of supplies, no government aid is arriving.”

The inefficiency of the Indian State and its client regime in Kashmir can be gauged by the fact that water levels have not receded due to the unplanned development around the city which is in total contravention of environment rules and disaster management protocols. Reports on social media suggest that India has denied entry to foreign aid agencies, fearing a 2005 earthquake-like vulnerability of its actions in Kashmir. (Remember that mass graves were found after the earthquake in the areas worst hit.)

The government has failed to provide food, shelter and water to the people and all help is provided locally by the people through self-help volunteers. But the Indian media is trying everything to conceal that under the facade of the “heroics” of their army.

The Indian media, through its continuing biased reportage of the catastrophe, has brought disgrace to journalism. It is bizarre and gross stupidity to think that such a public relations exercise will help India absolve itself of the crimes against humanity or really turn Kashmir into its atoot ang (internal part). Nothing can be farther from reality.

Kashmir will celebrate the Indian cricket team's loss, no matter who they play against!