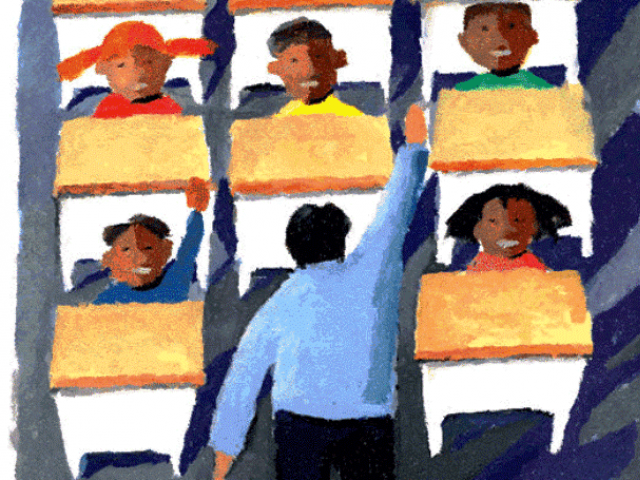 Teaching is a calling and the best ones treat it as a sacred trust between them and their young charges.PHOTO: FILE

As part of a remembrance to Robin Williams, I arranged a showing of Good Will Hunting and invited some school friends over. After the movie ended, one of them remarked on the critical role the protagonist’s teacher, Prof Gerald Lambeau (played by Stellan Skarsgård), a Fields Medal winner, and mentor  Sean Maguire (played by Robin Williams) had in his development.

“We didn’t have anyone as dedicated as them. Not even close.”

I had to disagree and thought back to an incident back in March 1991.

The phone rang and my mother picked it up.

“Hello, is this the home of Sibtain Naqvi?” a lady asked.

My mother confirmed that it was, but was surprised to know someone was calling her son.

“This is Mrs Zubair, his class teacher. He hasn’t come to school for a week. Is everything alright?”

My mother told her that I have been ill with jaundice and won’t be able to make it for a few more weeks. Mrs Zubair became concerned at the prospect of me missing school for that long and not being able to prepare for the impending final exams.

“Can you please bring him to my home so I can give him lessons there?”

We went to her house in Sea View apartments and, after pleasantries, she gave my mother a sheaf of papers saying that these notes cover what has been done in class in my absence and she will give lessons every week so I don’t fall behind. True to her word she would cover each day’s lesson and patiently sit with me for hours until she was satisfied with my performance. More importantly, she would do it in a welcoming way, asking about my health, preparing the right snacks and making sure I am taking my medicine. In this role she was nurse, teacher, friend, guardian angel and much more. At that time I did not fully realise the enormity of her generosity. As children we cannot comprehend the sacrifices made my adults around us. I never gave any thought to the fact that she had a family of her own and was putting me ahead of others in her life. Today, older and wiser, I feel overwhelmed by the mark her selfless gesture has left on my life. She made me realise that a child’s first mentor and hero is none other than his teacher.

A wise man once said that teaching is the noblest profession. The ideals of imparting knowledge, shaping character and giving direction are noble indeed. The great philosophers, the thinkers and writers were mostly teachers in one way or another. Aristotle gave Alexander the Great the vision to conquer the world, not just with the strength of arms but with Hellenic ideals and bridge the east and west. Confucius, John Locke, Henry David Thoreau, Sir Isaac Newton, Albert Einstein are just a few other great teachers that come to mind.On the religious side, the prophets were essentially teachers, albeit divinely inspired. Can anyone deny that Abraham, Moses, Jesus, and Muhammad were teachers of both moral and social values?

Fortunately, I have been lucky to have been taught by some truly outstanding individuals. Mr Ranjit Singh, the Chemistry teacher during my O’Levels, was one. He taught the other section and six months before the exam, my group of slackers and I realised that we didn’t know our acids from our alkalis. As a rule, he didn’t take on students in the middle of the year but we begged him. He agreed but on the condition that we will work twice as hard as any other in his class. Each evening we would troop into his home at Boat Basin and soon we were on our way. Chemistry had always been an unsolvable mystery but, with Mr Singh, it became fun. He would tell us the names of things in Singhalese and talk about life in Sri Lanka. So well did he teach us that a bunch of Chemistry tragics ended up with good grades and to this day you can wake me at 3:00 am and talk about the periodic table, organic chemistry and the ionic structure (copper II sulphate ions are blue).

There were many others who influenced me from a young age. Mrs Baseerat was my fifth grade teacher who once in a while allowed us to play a game of antakshri and encouraged a love of classic songs. There was Mrs Khokar, who told me I have a way with words and let me submit my writing assignments in verse. A student once drew an unflattering caricature on the board and she found out. Rather than castigate him, she praised him for his artistic skills and then matter-of-factly told him that she doesn’t care what he draws as long as he does well in studies.

There was Mr Samad who had been afflicted with polio in his childhood. He walked with supporting crutches but carried himself with quiet dignity. Mr Samad had a sonorous reading style and in his day would match Zia Mohyeddin for his rendition of Shakespeare. He introduced me to Anglo-Indian literature through RK Narayan’s Malgudi Days and that is a legacy I will pass on to my children.

Not all my great teachers were from school though. Mr Humair Yusuf taught me at IBA and with panache converted a grammar class into a ‘Rhetoric and Writing’ one. Business programs usually don’t include discussions on why ‘knight’ is spelled with a ‘k’ but he did it and inspired in us a love for rhetoric and linguistics.

The one thing common between them all was their passion for teaching and the sense of wonder they were able to instil in us. The idea was not to become mere authority figures but to engage the students in ways that left a lasting impression. Great teachers are their own masters and not bound by the straitjacketed approach taken by lesser practitioners. For instance, Claude Elwood Shannon, the ‘the father of information theory’ and founder of both digital computer and digital circuit design theory, was also an avid juggler and unicyclist who would go from room to room on a unicycle. A senior professor and researcher told me about a mathematical question he posed to his students and if they solved it he would take a dip in the nearby lake. They solved it and he took the jump. Naked. In the middle of winter, in Scotland.

Now that I work with some wonderfully talented academics and teachers at Habib University, I am constantly reminded about how they and their brethren shape the lives of those entrusted to them. Teaching is a calling and the best ones treat it as a sacred trust between them and their young charges. There is no Hippocratic Oath that formalises this relationship but then none is needed. Would you ask a parent to take an oath to nurture their child? As Aristotle said,

“Those who educate children well are more to be honoured than they who produce them; for these only gave them life, those the art of living well.”

No truer words can be said about these people, these heroes.

This blog is part of an interactive campaign called Aao Parhao – Jo Seekha Hai Wo Sekhao (Come Teach – Teach All That You Have Learnt); a Call-to-Action to help change the future of Pakistani children, launched by the Express Media Group in collaboration with Ilm Ideas.

So join us, by reading, watching and telling us what you think. To be part of the Aao Parhao movement, please visit our website, like our Facebook page, and follow us on Twitter at to get regular updates about all our activities, learn about teaching opportunities and share the stories of inspirational teachers.