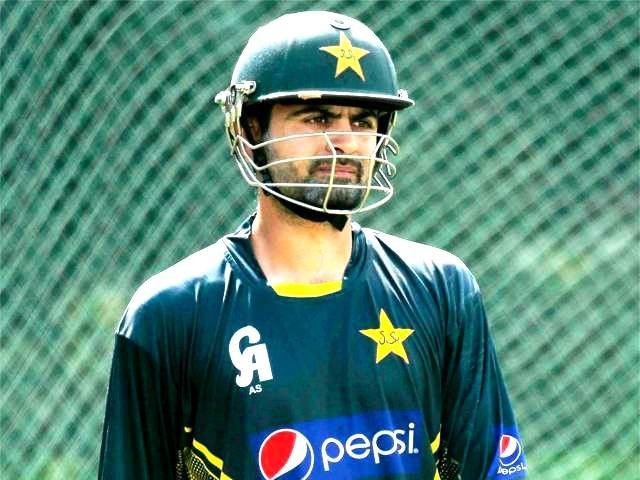 What is most troubling about the incident is that it hasn’t seemed to result in any trouble for Shehzad, who is clearly unfazed by the entire episode. PHOTO: AFP

What was Ahmed Shehzad thinking? One blogger in Pakistan quipped perhaps the cricketer was trying to secure the sports ministry in a future Tehreek-e-Taliban Pakistan (TTP) or Islamic State of Iraq and Syria (ISIS)-led government. But retorts aside, what is most troubling about the incident is that it hasn’t seemed to result in any trouble for Shehzad, who is clearly unfazed by the entire episode.

Coupled with Tillakaratne Dilshan’s casual response and his decision to remain silent over Shehzad’s completely needless evangelism, Shehzad may easily get away for what he shouldn’t. Whether the Pakistan Cricket Board (PCB) will choose to impose any sort of penalty on the cricketer is another matter, but Shehzad’s lack of remorse will send out the wrong message to other Pakistani cricketers: preaching on the pitch is kosher.

According to Shehzad, it was a “personal chat” with “nothing more to it”. That he chose to have this ‘personal’ exchange with Dilshan in front of a multitude of cameras and while still on the ground says something about his ability to gauge appropriate settings. And the Sri Lankan cricket authorities’ non-existent reaction will only serve to feed this delusion of the right-handed batsman. One can only imagine what the reaction of the Pakistan Cricket Board would have been had a Sri Lankan cricketer tried to convert a Pakistani cricketer to Buddhism or Christianity. It would not be far-fetched to speculate riots on the streets, demands for expulsion of the guilty cricketer and torrid swipes from the authorities and fans alike.

Team manager and former captain, Moin Khan, was of the view that Shehzad’s loose-lipped slip was “general banter”. However, unlike the banter that cricketers often resort to, even when girdled with cameras, Shehzad’s comments came after Pakistan had already lost; serving no purpose to unsettle an opponent in a bid to make him act rashly and make a mistake in the process. Instead, Dilshan’s cool demeanour only went to further rile up Shehzad. Though it is not clear what Dilshan said in response to Shehzad’s ‘invitation’ to embrace Islam, the latter’s remark of bracing for hell’s fire shows either his desperation at trying to save face or an attempt to counter a polite snub with an impolite affront.

Fortunately, it will be difficult for Shehzad to forget the incident whether PCB, which has launched an inquiry, chooses to penalise him or not. The footage has already gone viral and newspapers have not shied away from reporting the incident. More importantly, the view on social media seems unanimous: Shehzad’s antics were uncalled for. This reflects the general perception of viewers that sportsmen should be secular on the field. Racial, religious or ethnic misgivings on the pitch fuel intolerance and promote bigotry.

In any case, it is befitting that the International Cricket Council (ICC) has chosen not to act arbitrarily, since Dilshan or Sri Lankan authorities have not yet filed a formal complaint and are unlikely to do so. Had the ICC erupted into action, some sympathetic quarters would have attempted to legitimise Shehzad’s remarks. The silence, instead, will put the onus on the PCB to ensure its players maintain protocol. Otherwise, as we all know, loose lips sink ships.