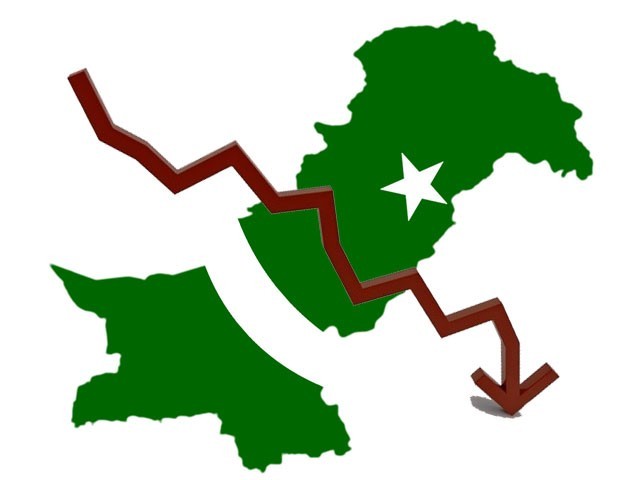 The decrease in inflation must have turned a few heads though; until blood and tears continue to flow in Islamabad, the economy shall not.

The first bullet shot in Model Town echoed through the streets of Lahore. We may never know what was going through the mind of the man who pulled that trigger or through the mind of the one who authorised it, but what followed was one of the most dramatic domino effects in the country’s recent history. Although Imran Khan will probably insist that it also has something to do with election rigging.

Tahirul Qadri’s second coming, the twin marches on Independence Day and the sit-ins since then, resignations in the assemblies, the march into the Red Zone, the use of force by the government as protesters barged into PTV and attempted to enter the PM House, and amidst it all, the fear of martial law and hushed whispers of agencies and foreign powers.

Perhaps in the pages of history, decades down the line, this may all seem like a crumbling deck of cards but at the moment, they are all separate incidents, one after the other, an ominous line of falling dominos hurtling towards an uncertain end. However, in all this turmoil and chaos, there seems to be a silver lining –  inflation is lower than what it has been for a while, at only seven per cent in August.

Look closer though and it may not be a silver lining but the reddest of all the dominos; the straw that may finally break the camel’s back.

On the face of it, lower inflation seems to be a good thing as purchasing power remains relatively steady in these uncertain times but inflation is a necessary evil. To understand this, one must look at how inflation works in an economy and how it may be indicative of progress.

In times of a boom – the economic term used for a thriving economy – more people are being employed. Since more people are working, they have more money to spend. As people spend more, further venues of employment open up. This becomes a positive spiral that essentially feeds itself. However, as more and more people are employed and have the power to spend, demand exceeds supply. This, in turn, drives up the price, hence leading to inflation.

In times of a recession – the economic terms for a troubled economy – the opposite spiral comes into effect. Employment decreases and so does spending power. This means that companies will then have to make cuts as sales decrease, which leads to further unemployment. The vicious cycle tends to cripple an economy, supply exceeds demand and hence inflation decreases.

To counter these two spirals, as neither can go on forever, the government manipulates the interest rates to manipulate investment (a high interest rate would mean that keeping your savings in the bank is a good choice due to the high rate of return but a low interest rate means taking a bit of risk and investing somewhere may be the better choice). An increase in investment means more revenue for companies, allowing them to employ more and the cycle starts all over again.

However, the Karachi Stock Exchange has been brought to its knees and in these uncertain times, investment has stopped as people wait for the crisis to blow over before spending or investing again. This further decreases inflation in the short term but may have a crippling effect on the economy if allowed to continue.

In a country like ours, riddled by internal and external debt, inflation may also mean reprieve as the purchasing power of the debt, and its interest, decreases.

While a one-month decrease in the rate of inflation may not yet herald panic mode, it is still a cause of worry due to its timing; one cannot possibly believe that it has been brought about by a positive market balance, especially considering that the real-estate industry of Punjab’s finest has come to a standstill. Neither is Pakistan going towards a Japan-esque deflation where the economy crumbles as demand, wages and price all come crashing down.

But the omens do not bode well.

Ordinary lives are being lost but the country’s high command never did care about ordinary lives. The decrease in inflation must have turned a few heads though; until blood and tears continue to flow in Islamabad, the economy shall not. Something has to give, so if it keeps on raining the levee’s going to break.