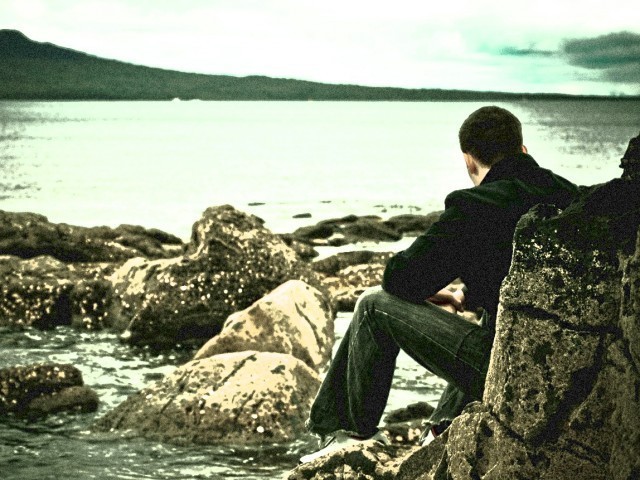 Some things are permanent, my son. And death is one of them. But look, there is always a catch. Death is permanent, but you meet me in dreams, and so I could be this plant in your mind which will be fresh as long as you remember to water it. PHOTO: FILE

“Ghaffar, do you know that this is a dream? Only my ideas are real, the rest of all of this,” pointing to the room, the fireplace, the walls, and a recent family picture “is just an illusion.”

“Yes father, I know but I don’t want to accept it. You say anything is possible once one works for it. Why then can’t you come back?”

“Some things are permanent, my son. And death is one of them. But look, there is always a catch. Death is permanent, but you meet me in dreams, and so I could be this plant in your mind which will be fresh as long as you remember to water it.”

“But, who decides what is permanent?”

“Some say it is God, others claim it is nature.”

“I say, what should concern us is more of how we treat death, and then we should locate the force behind it. Because the force is going to exist regardless of our search; so why not search for the roots once we are surer of its stems.”

“There you go again, how do you expect me to understand each of your examples?”

“Because you can, and you have.”

“So, father, what about God? Why is everyone so obsessed in proving Him and disproving Him?”

The father smiles, and the air is devoid of words for a few minutes,

“You never take so long to answer.”

“There isn’t much I can say on this. People have talked about Him through centuries, in volumes and volumes. People have used His name to carry out infinite acts of justice and injustice. People have fought over His name, died, killed and murdered.”

“Do you believe in Him?”

“The more I talk about Him, the more His presence attempts to leave me. When something is in everything, how do you locate him to a single place, or describe him with a single word?”

“But if He really were present everywhere, why would people not believe in Him?”

“Son, do not believe what I am saying. Sit with everyone, the atheists, the believers, sit everywhere, and just listen and cease to make conclusions. Just observe slowly and eventually, just as pure water is filtered through sand, the truth would eventually drip, and each of its drops would put all your previous ideas to flames.”

“Ghaffar, just remember, the point is not to debate about His existence. The point is to understand this heart of yours; where the self resides, where a universe throbs. Once you understand the intricate worlds that exist inside here, and you commit yourself to improve the world around you, by not convincing people to your viewpoint, but to provide them opportunities to think from an independent platform, then all the rooms inside your mind that have been intimate with darkness would come alive.”

There were paint brushes across the sky and on a canvas of light blue there was a long stroke of light red and in the exact middle was a feeble yellow light, slowly dimming its way down the canvas. Ghaffar looked around and saw that people’s sight was confined to their friends and their interests. The skies and the universes beyond were always around them, yet so far away.

Sometimes his feeble heart had enough strength to imagine itself as part of the skies, without an existence of its own, but only with a million eyes, roaming through the galaxies, travelling into every nook of the milky way, exploding with awe, exploding with wonder at faces of beauty, facets of design; all behind a semblance of ordered chaos.

For now, he was walking towards the class and suddenly, he saw Sadia coming from the opposite direction, and along with her were two girls and a guy. Strangely, all their heads were held high, as if from a disease; he silently smiled at the thought. It had been three months since he and Sadia had properly spoken about anything; their previous conversations were over in seconds. But, Ghaffar wanted to give it one last try,

“Hi Sadia,” he said, as he approached her.

Sadia gave a small smile, a smile he had not seen before, at least from her, one brimming with custom and compulsion,

“I’m fine, how about you? Where are you heading?”

“The class got cancelled, so we were heading to the café.”

“Okay, can I speak with you for a minute?”

Sadia looked around at her friends and shrugged her shoulders, as if a great weight had come to rest upon them,

When they were out of earshot, Ghaffar looked at her. She seemed different, there was something about her clothes, and a strange confidence he had not noticed before, and the clothes? She always had a unique dressing style, but at the moment they seemed too normal, too acceptable;

“I’ve realised that no matter what I believe, I should not have spoken the way I did about something you hold so sacred.”

Sadia looked around to ensure no one was listening and calmly replied,

Ghaffar gaped at her.

“I mean, both of us have different goals in mind, so there’s no point trying to run after each other to take the same journey. Sorry, was there anything else you wanted to say, my friends are waiting,” she said, again with that smile that made his heart cringe.

“Nah, nothing… else,” he replied slowly.

The next days in college were strange; Ghaffar attended all classes but his heart continued to shift, here and there, there and here, unable to settle in a position. His mind brought forward his father’s words about attachment but his self was not willing to leave the shore. Its object of desire was somewhere here, somewhere beneath the beautifully shining sand. Even if a knot had been broken, was it not worth to search for that part of the rope which had once touched the rope of the desired?

“There is this room near this heart of yours,” his father says, touching Ghaffar’s heart lightly with his freshly cut nail. Ever so softly. The heart suddenly races, directionless.

“In this room, there is only one thing. But it is everything. You are born with it and you die with it.”

He smiles, and directs his shining eyes into his.

“That thing is curiosity Ghaffar. And one of the tragedies of this world is that we lock this door.”

“So this curiosity slowly dies away in the room?”

“No. Never. It cannot die. That is its beauty and its tragedy.”

“Initially, as a child grows, just as you are growing, his curiosity has little obstacles. But, as age dawns upon him and inflates his shadow, those around him begin to corner curiosity and lock him in an enormous room.”

“But does it not escape? If it is such an old fellow, should it not know how to break out?”

The father laughs at the comment. A laugh that is mixed with pleasure and surprise at his son’s intelligence.

“No, curiosity is old but its heart is young.”

“I don’t understand. There is more than one heart in our body?”

“Yes! Each emotion you have owns a heart. In varying sizes. In varying shapes. Curiosity’s heart is the smallest but the strongest.”

“Curiosity has an eternal zeal, Ghaffar. Soon, after being locked, it bangs itself against all walls. Never screaming, never pleading, never cursing, just rebelling.”

“Then, more locks are placed on the room. The walls are increased in width. Other rooms are built far way. Far away from any sounds.”

“But who does this? Who puts these locks?”

“Society me, your mother, your cousins, your friends, the people you do not know, the people that you knew in the past. All carry locks with themselves and whenever they meet anyone, they slowly, steadily, and politely put a lock on the others’ curiosity.”

“I don’t believe that. Why would you do it? Or mother? Or anyone else?”

“Because we cannot imagine our palms without the locks”

“But you are strong, you can certainly fight it, can you not?”

“So you are part of society, but you also fight it?”

“Would I have to fight it too when I am as old as you?”

The child smiles for the first time that evening. Finally, a question that his father cannot answer.

“Is your curiosity locked father?”

“No. But the society thinks it is.”

“You are confusing me more.”

“My curiosity is behind a door that seems to be locked, but it isn’t. At night, when everyone is sleeping, it goes out and plants dreams in the heads of those closest to the room. Then, it runs on silent feet and begins to explore all the varying forms inside the body. In the darkness, it knows all ways. It cherishes the symmetry inside, the beauty of the motion, the intricacy of the structures and is delighted to witness the overall architecture.”

“But father, in all these adventures, does curiosity not need a father, mother or a friend?”

“It does but no one is able to match its zeal.”

“Is your curiosity your friend?”

“But I don’t want any secrets.”

Part III of the “Dreams of Lunacy” series will be published on Thursday, September 11, 2014. Stay tuned to see what happens next.