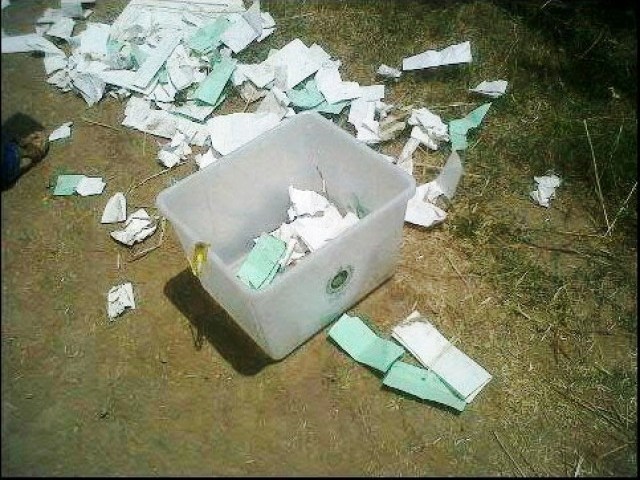 Imran Khan argues that the current government came into power through widespread rigging, is hence illegitimate, and must be destabilised at all costs because it won’t allow a fair investigation. There is nothing wrong with this logic. PHOTO: FILE

It was the morning of May 11, 2013, Election Day. A day when majority of Pakistanis, having been fed a steady diet of political advertising where the various parties had promised them the world, woke up with a feeling that they had a hand in their nation’s future.

That morning, my plan was simple. The day would start with a thirty minute drive to my voting area near Karachi’s National Stadium, where the booth was scheduled to open in the morning. Here, I would quickly cast my vote, and be back in time for a delicious brunch.

Looking back now, I realise that perhaps I was naïve in believing that anything in Pakistan could be that simple.

When I arrived thirty minutes early, a small crowd had already gathered. To my surprise, a political party had set up their booth right outside the entry point. This popular Karachi based party, let’s call them The Voldemort Movement were aggressively pushing their party memorabilia on to voters and asking some personal questions.

Ignoring them, everyone waited until it was officially time to vote. Yet the officials did not show. Many frustrating hours later, where some of the senior citizens went back home without voting, the process finally began, and we finally cast our votes, a full three hours after the process was actually supposed to have begun.

When I finally returned home to my family in the Defence Housing Authority (DHA) area, I learnt that while some had cast their votes, many were still outside waiting in the heat in their respective DHA voting localities. With some family at my side, I bought as many refreshments from the store as I could, and decided to go distribute them to the hungry and thirsty strangers waiting in line all across DHA.

Some of the scenes in the various phases of DHA were incredible. These areas, which were considered to be strongholds of the new political party promising change and reform, Pakistan Tehreek-e-Insaf (PTI), were jam packed with massive crowds of people waiting in the heat to exercise their right. Although the people tried to keep their spirits high by waving PTI flags and chanting PTI anthems, the frustration was clearly written on everyone’s sweaty faces.

Soon, rumours of The Voldemort Movement workers harassing PTI voters in areas hours away from DHA began to circulate through social media. Meanwhile, we learnt that the voting booths in the PTI strongholds had simply not been opened because of death threats delivered to the respective officials the morning of the elections. I can only speculate who had to gain from these threats.

Interestingly enough, The Voldemort Movement actually made the mistake of sending its goons to some of the DHA areas to harass PTI voters. While these tricks worked for the Voldemort boys in localities where their Death Eaters carried stronger numbers, in DHA they faced resistance. To be more specific, in DHA Phase 7, where a relative of mine had stood for over 12 hours to cast his vote, at least two Voldemort’s goons were caught and beaten after threatening PTI supporters. Several men and women in the area, who witnessed this, recorded the event on their cell-phones.

Unfortunately, while some eventually got to cast their votes after having waited all day long, many did not. What’s more, some were shocked to learn days later that their votes had been nullified, and the long queues had been for nothing.

It was only days later that the true extent of the widespread rigging began to become apparent to Pakistanis, as various videos of electoral fraud spread throughout the internet. In Karachi alone, I heard countless stories from everyday people such as maids, mechanics, drivers, gasoline workers, and shopkeepers, of the wide scale fraud which took place in the port city. Just yesterday, another taxi driver told me of how, on Election Day, he had witnessed boys in the Nazimabad area simply standing there and stamping ballots.

When investigating election fraud, it is more important to speak to the lower class people, because their votes are more easily preyed upon, and they belong to localities where the officials have little protection against threats. Perhaps the most interesting story came from a car electrician, who happens to live in Voldemort’s stronghold in Karachi, and is a strong supporter. He himself told me that his friends were complicit in the activity.

Another account is of a group of students from several local colleges, who claim that they weren’t allowed to vote for any party other than The Voldemort Movement. What’s more, the election officials standing there were obviously aware of what was happening.

This sad hijacking of the election process should be offensive to voters of all parties, including genuine voters of The Voldemort Movement.

On a recent trip to Punjab, I was surprised to learn that if anything, the rigging was far more rampant in the heart of the country. Here, while visiting a local factory, I talked to hundreds of labourers during lunch hour, who gave first-hand accounts of rigging in their respective areas.

It is simply mind-boggling that there are so many eye witness accounts to election fraud.

Imran Khan argues that the current government came into power through widespread rigging, is hence illegitimate, and must be destabilised at all costs because it won’t allow a fair investigation. There is nothing wrong with this logic. If a judge robbed me, would I want the case to be tried by that very judge, or someone impartial?

Imran’s recent movement has been controversial to say the least, but his detractors on social media seem to attack the man on all fronts while ignoring the subject of electoral rigging. Certainly, Imran has provided those who dislike him with plenty of ammo through his strangely soft stance on the Tehreek-e-Taliban Pakistan (TTP), inconsistent decisions, and an obvious inability to manage members of his own party.

There is a reason why we, of better means, are happy to discuss every aspect of Imran Khan except for his fight against election rigging. The fact is that if we allow ourselves to believe that Imran is right and that the current government rose through fraud, then we must admit that he is correct in his need to destabilise the Pakistan Muslim League-Nawaz (PML-N) government until Nawaz Sharif steps down. Of course, this would lead to schools being shutdown, a worsening rupee and an overall worse quality of life in the short run. Naturally, all of this is very inconvenient, so we would rather go the way of the ostrich and bury our heads in the sand.

The message from many of us to the political forces seems to be that rigging isn’t acceptable, unless it is inconvenient for us to make an effort towards real change. In that case, please go ahead; bend the elections, as long as we can carry along with our sheeple ways.

Perhaps the reason Imran attracts so many from the lower class is because they have little to lose.

Recently, on a day where Imran’s revolution in Islamabad had been exceptionally controversial, Twitter was full of comments from PTI voters, like myself, who bemoaned the fact that they had stood all day in Karachi to vote for the party, only to have Imran Khan fracture the country as he is doing now.

In hindsight, such comments seem a little silly, because our long wait to vote on May 11 was not Imran Khan’s fault but due to the attempted doctoring of Election Day. And currently, Imran Khan’s goal is to take a stand against election rigging. This would be like saying,

“I battled this illness all day on May 11 to vote for you, and you are now destabilising the government to battle this illness because it won’t go away? How dare you?”