If not sanity, let democracy prevail 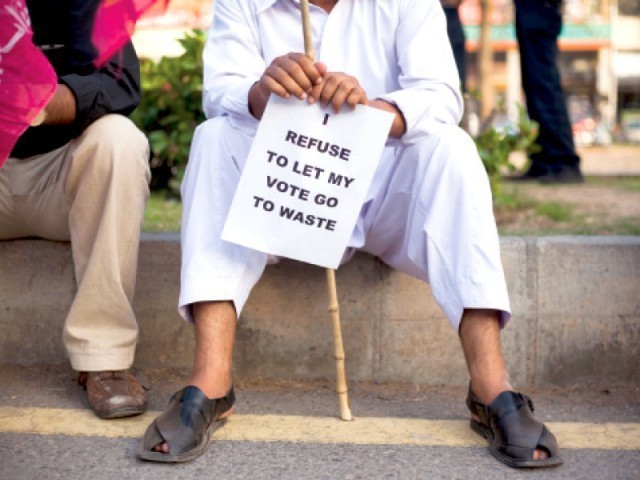 Just after a year Imran Khan not only decimated all my hopes but he abhorred all those democratic values for which he once advocated. PHOTO: FILE

Aristotle once said that democracy is when the indigent, and not the men of property, are the rulers. To realise that very dream in my country of birth, I solely travelled across the continents to vote in the 2013 general elections. Pakistan, for the first time, was holding elections since its independence under civilian control and I, for the first time knew, who to vote for.

For all the right reasons I decided to vote for Pakistan Tehreek-e-Insaf (PTI) led by Imran Khan. I pinned all my hopes on him, who swore to live by all the democratic values. But, just after a year, Imran Khan not only decimated all my hopes but he abhorred all those democratic values for which he once advocated. He disparaged the sentiments of the citizens in Pakistan, who believed in the continuation of democracy.

Imran Khan, in a bid to jolt the foundations of this government, claimed to bring one million protestors to the capital by August 14th, 2014. Instead, it was not even two percent of what he claimed. An article, ‘Pakistan’s political path – Two steps back’, in the The Economist quoted:

“While the crowd has ebbed and flowed as the monsoon rains have come and gone, it is generally thought to have peaked in size at around 20,000.”

Other than that, all the local media channels and independent journalists quoted almost the same number; and as I happen to be the resident of the twin cities; all my friends and family described a similar situation.

Last but not the least, if the protestors were even 10% of what was claimed, the government would have been long gone.

Allow me to start my rant from Khyber-Pakhtunkhwa (K-P) now, which is the most unheeded province of Pakistan. Imran Khan formed his government in K-P after the 2013 elections. Commending his performance in K-P is a magnification of tiny achievements. Before I start my emotional rant, allow me to tell the readers that I am not only the voter of Imran Khan but was a party worker for the past five years. I applaud the police reforms in K-P, but that was not the only thing that province needed.

This self-given triumph crown of PTI in K-P went to ruins the very day when Khyber-Pakhtunkhwa chief minister danced on stage while 20 people died in Peshawar due to disastrous rains. I am still waiting for the local bodies’ election, which Imran Khan repeatedly promised before and even after the elections. The self-praise of PTI for its government in K-P is not only primitive, but also dazed to a certain extent. I had never been a protagonist of the current ruling party, Pakistan Muslim League-Nawaz (PML-N), nor do I believe that they have what it takes to pull the country out of the pits of socio-economic disaster. But since a huge chunk of people in Pakistan voted for them, it is only a cardinal measure for democracy to allow them to complete their democratic five years term.

Pakistan and democracy have been in a precarious truce since our independence in 1947. The country had seen three officially declared martial laws and numerous small unannounced coups behind closed doors. This essentially means that; 80% of the time, the country was not under civilian control and hence, without democracy. Therefore, the idea of ‘civilian supremacy’ has become vague and wispy to the citizens of Pakistan.

Elections held in May, 2013, were a giant leap towards a functioning democracy. For the first time in 60 years a civilian power transfer was realised, as a result of long-lasting struggle by the people of Pakistan. Since the 2013 elections were the first of its own kind, many irregularities surfaced as more than 30 independent media houses covered the elections. Whether these irregularities were purpose-driven or the result of mishandling of slothful employees of the election commission is yet to be determined.

According to Imran Khan it shamed all his chances of being the premier of Pakistan, as PTI was the most affected political party of this electoral fraud. The grieved Imran Khan took to the streets of Islamabad, where he still is demanding electoral reforms along with the resignation of the prime minister.

This ‘Azadi movement’ has crippled the twin cities. Middle-class businessmen are facing the brunt of this the most. The entrance to the Parliament and Senate has been blocked; the honourable judges can’t even follow the routine route towards the Supreme Court. The street mob even threatened to attack the Premier House. Open toilets have filled the capital city with fetid odour and malodorous air which can result in any epidemic outbreak.

This movement was supposed to be only for electoral reforms, but now it has taken a different colour. Adding the urge of civil disobedience further diminished the support for this baffled movement.

I voted for Mr Khan so that he could fight a constitutional and democratic war, but in the past one year and four months during his time in the parliament, not a single amendment or legislation was suggested by his party to implement electoral reforms. He gave up the legal or constitutional war in just one year time. The country which has only seen a glimpse of democracy can’t be deprived of it, just because the very first elections it conducted under civilian set-up did not happen to meet the high standards of some politicians.

The military establishment had been sending governments home for the past 60 years, selling only the same narrative again and again. It was told to us, every time, that if this elected government will complete its tenure the country will be ruined.

People suffer from amnesia; they keep forgetting that for the past 60 years we had been trying this solution of sending elected governments home, and it has never helped.

Politics of street mobs only add to agitation, economic instability and socio-political unrest. The cleansing of the system is in its continuation, not in its interruption. There are no byways to an effectual and potent democracy; the only way forward is to bolster up the Parliament, which requires a long and tiring democratic struggle.

He is a socio-political activist and believes in civilian supremacy. He tweets as @malikaliwaqar (twitter.com/malikaliwaqar)

Fauzia Kasuri: Fight for PTI's interests, not your own!