I do not support PAT, PTI or the government 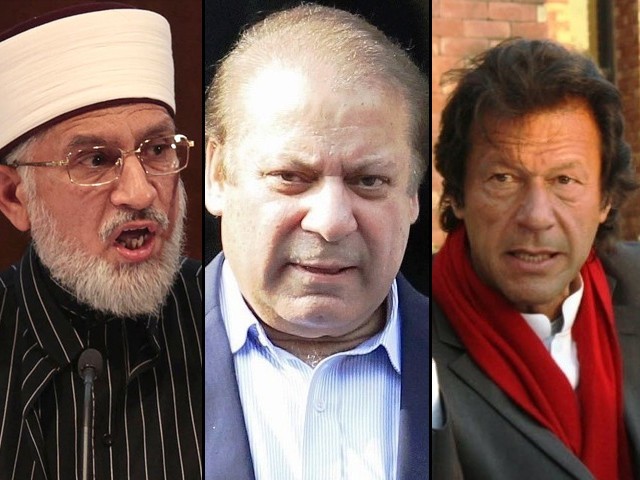 We don’t want election reforms with these same being elected over and over again.

The scenes shown on television Saturday night were nothing short of shameful, disappointing and uncivilised for a nation like Pakistan. Unconsciously, I was continuously comparing the events of that night with the horrors shown in The Purge, a movie about a night when laws cease to exist.

Surely, we did not deserve that as a nation. Or did we, by blindly following egotistical leaders with a thirst for power without realising the true purpose of democracy?

I do not agree with the fiery rhetoric of the protestors nor do I agree with the blunt attitude of the government. There was no need to divert Tahirul Qadri’s plane by experimenting with international law and playing god with the property of a sovereign nation. Mind you, these are the same geniuses that lost control of the capital to a genie named Malik Sikander a year ago. The same brilliant minds also promised the end of power cuts at least 20 times in the last year.

I’m sure Pakistan Tehreek-e-Insaf (PTI) supporters would be over the moon by now. Wait right there. Instead of giving you recycled arguments about this party’s lack of political character, let me talk about my own personal experiences with this “magnificent institution of self-righteousness”.

In the last year’s general elections, PTI’s candidate from my home district’s constituency, NA-93 Toba Tek Singh II, was Mr Muhammad Ashfaq. A well-known personality in the area, he was mayor of the town during the Musharraf Raj. He vehemently supported the rule of army and staunchly defended the martial law of 1999.

He has been known to switch parties three times, yet the locals vote for him regardless of his party position. The politics has always stemmed from the infamous zaat (caste) system. One is expected to vote for his ‘own people’, be it Jatt or Baloch or Muhajir. I know for a fact that I will be chastised solely for writing these harmful words.

In a country where people don’t know about a leader’s policy, where rhetoric dictates the love of a political personality, where ‘mazarah’ (feudal system), ‘biradari’ (community) and ‘aurat ki izzat’ (women’s honour) are used to gather votes, where ‘peer saeen’ and ‘chaudhry sahab’ get the votes, it is difficult to see how this party can blatantly claim the moral high ground.

Never mind the ‘Naya Pakistan’, I’m sure Imran Khan cares deeply that his parliamentarians are all recycled supporters of an unconstitutional military regime, a mob of dirty politicians who benefited from the National Reconciliation Ordinance (NRO). I’m sure Sheikh Rasheed Ahmed, Pervez Khattak and Shah Mahmood Qureshi are reformed now. I’m sure Shah Mahmood is not the ‘gaddi nasheen’ (successor) anymore and I’m sure his votes are not collected from the countless ‘mureed’ (followers) he has gathered.

Lest we forget the Pakistan Peoples Party, whose go-to phrase, for the last three and a half decades, has been the rebirth of Bhuttos. The people working in PTI hail from the same mindset.

What is this travesty of city called Nawabshah? We shall call it Shaheed Benazirabad now.

Remember Bhutto stood up in front of the world – he tore up the UN resolution. Yes, that he did just like he tore the country in 1970 by refusing to put his ego aside and concede the election and singlehandedly waged the 1965 war due to poor decision making as the foreign minister.

The point of the rant was to illustrate the actual issues with our election system. We don’t want election reforms with these same being elected over and over again. We want a change in ideology and a change of approach. Unfortunately, we may have switched affiliations to a party proclaiming a ‘Naya Pakistan’ but the attitudes, the politicians and the advisors remain the same.

The grassroots electoral system remains the same. ‘Mazarah’, ‘biradari’ and ‘mureed’ still exist in the country. A violent protest, an invasion on the parliament and a ‘danda bardar dharna’ is not going to change that. Baseless accusations are not the reform we need. The political area remains charged because of the egotistical attitude and the greed for power of all our leaders.

Imran would like to be prime minister, Nawaz Sharif wants to hang on to power and Tahirul Qadri wants to be the most powerful man Pakistan has seen while our existence, as a nation remains a question. If only our citizens would realise the futility of this exercise.

A sophomore at Princeton University studying public policy at Woodrow Wilson School of Public and International Affairs. He is a research assistant at the Bobst Centre for Peace and Justice at Princeton. He was born in Toba Tek Singh, Pakistan and remains interested in the political and socio-economic situation of the country.