All PTI did was talk about alternatives 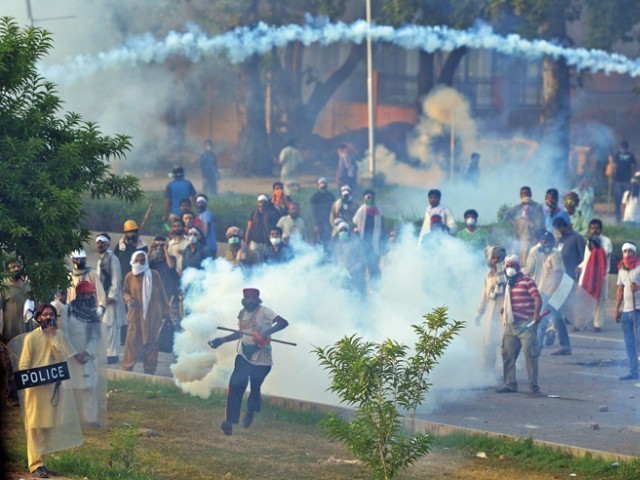 Looking at the images of shelling on our television on crowds that consist of women and children, dictated by a man who is sitting on thousands of acres of private estate, I feel disgusted and ashamed. PHOTO: AFP

I write this piece as I see tear gas shelling and aerial firing towards massive crowds that are protesting peacefully outside the Prime Minister House. I write this as we hear of a girl from Dera Ghazi Khan who set herself on fire after not getting justice from the police for gang rape, and now her mother is part of the Azadi dharna in hope that her daughter’s death would not go to waste. I write this as I see our police become a mercenary force for a ‘supposedly’ democratic government that has taken on the role of, what I have often heard my mother refer to as, ‘firoun’ (pharaoh).

All this because these people are out there asking for their rights?

Watching these images right now, all I want to do is be in Islamabad. Having been there for the first few days of the march, all fear left me as I stood in solidarity with fellow Pakistanis asking for our basic rights. I have never felt more Pakistani than I did at those dharnas; it was not about any ethnicity, religion or gender. It was purely about Pakistan and an average Pakistani’s fundamental rights. Looking at the images on TV of shelling on crowds that consist of women and children, dictated by a man who is sitting on thousands of acres of private estate, I feel disgusted and ashamed. Did they learn nothing from the Model Town incident?

I fit into what you can call the quintessential ‘burger’ category; growing up and coming from a completely apolitical family, politics never ever interested me. So my impressions of Imran Khan were limited to seeing him lift the World Cup as a kid, interviewing him for Shaukat Khanum Memorial Cancer Hospital (SKMH) for a children’s TV show, before the hospital opened up in 1994, and then, of course, hearing about the success story that  SKMH became over the years.

During this time, I heard passing conversations about Imran Khan and his political party; often from my father who maintained that Imran should have stuck to philanthropy. But these conversations never really caught my interest, until I saw Imran Khan at TEDx Karachi 2011. He never spoke politics in that talk but his never-give-up-on-your-dreams speech deeply resonated with me. Here was a man who had been laughed at, who had been written off every time he took on a project and yet, he stood here telling us about the success stories that those projects had become.

From there on, I started paying more attention to what was happening with Imran Khan and his political party. On October 30th, 2011, looking at the crowds that hit Minar-e-Pakistan in his support, anyone could see that the narrative was shifting. He spoke about fundamentals that day: minority rights, women’s rights, nepotism, de-politicisation of the police, corruption and, most importantly, he addressed the ordinary man. From rickshaw drivers, to civil servants and policemen, Imran Khan welcomed them all to help change the tide towards a Naya Pakistan. That was the day I became a Pakistan Tehreek-e-Insaf (PTI) supporter, and my conviction in the party and its mandate has only grown over the years.

Why do I choose Imran Khan over anyone else?

Because of the message his party has put forward and implemented in Khyber-Pakhtunkhwa (K-P) since taking power. This promise is one that advocates change at the grass-root level for education, health, a depoliticised police force and rights for all (regardless of gender, creed and religion). And what makes me proud is that we have seen these promises being fulfilled in K-P, in the form of mass immunisation drives, the building of a SKMH Peshawar, brilliant initiatives like the Tameer-e-School Programme and a depoliticised police force that are essential for a public that has no other doors to knock on.

Why did I think of writing this piece?

The experience I had with the Azadi march was unbelievable; it was of a Pakistan that was awake and alive. I see so many sceptics, especially from my own group of friends and acquaintances, making fun of those who believe in sitting and commenting from the comforts of their drawing room, pretty much having no idea about the situation on ground. To them what matters are false notions of ‘economic progress’ and as long as their businesses do well and they keep benefiting from an inherently flawed system – notwithstanding the fact that it comes at the expense of great foreign debt.

They accuse PTI for being a Tehreek-e-Taliban Pakistan (TTP) supporting party, I call their bluff. PTI is inherently against indiscriminate bombings that result in civilian deaths, they stand for targeted operations and engaging locals to weed out terror havens from the tribal areas. But nine years of indiscriminate operations have brought us absolutely nothing, except more terror. There has to be another way to deal with it, and all PTI did was talk about alternatives.

She is a hopeful Pakistani, and an entrepreneur trying to make her place in the world. She tweets as @ZarlashtFaisal (twitter.com/ZarlashtFaisal)