Is Imran Khan being ‘democratically correct’? 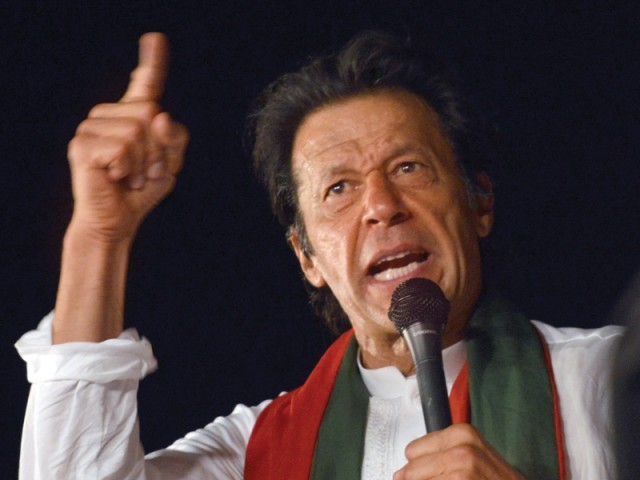 This is not an argument to rally support for the PTI; this is simply an expression of hope that we, as a nation, will look beyond what is projected in the media and grasp this as an important juncture in our political evolution. PHOTO: AFP

The political storm that has stirred in Islamabad has left many stunned and reeling to see what lies ahead. Among this intricately complex political dilemma, many senior politicians have put on their mediation caps and tried to return to more chartered waters. But despite all efforts, the emboldened and resilient figure of Imran Khan has stood in the way, reiterating his poetic calls for justice and reform.

Delivering those highly charged speeches, come rain or shine, he has shown his commitment to his cause that surpasses the usual, disengaged approach of most politicians.

Apart from his individual qualities, his recent political decisions have also highlighted his ability to think and act beyond backward and repressive political tactics. After being exposed to criticism from various quarters about his Azadi March, his demands, and the ensuing call for civil disobedience, I feel that there has been a certain level of bias against him in these analyses.

Though I may not agree with the timing or execution of the protest, it is irrefutable that as a parliamentary party it was their democratic right to peacefully protest. Whether this would strengthen or weaken democracy is a question that challenges the very foundations of democracy, however, protests ensure that democracy doesn’t evolve into tyranny of the majority.

Secondly, people claiming that this is merely an exhibition of his lust for power are ignorant of his relentless efforts to seek a less disruptive resolution to his queries, which again are within his democratic rights. If Afghanistan, in all its political turmoil, can have an audit of their presidential elections, then surely the party with the second largest vote bank is well within its limits to ask for an investigation in four constituencies.

If they are denied this basic demand, then they are bound to take to the streets to vent their frustrations. Better than resorting to ruthless, back door politics that would hurt the system more.

Civil disobedience is also a well-accepted and principally backed form of protest in democracies. Labelling this as immature politics is the result of having a very narrow scope of democracy that we are confined to.

His use of ideas that have become alien to democracies in the region in recent years reflect his understanding of the principles of this system, something that most politicians are clueless about despite their repeated claims of being “protectors of democracy”.

The fact that the situation has panned out this way is not a weight on Imran Khan’s shoulders. It is a portrayal of the political immaturity of our nation and the perverted form of democracy that is applied. I may not agree with all of Pakistan Tehreek-e-Insaf’s (PTI) policies but they deserve to be commended for adopting a different path and putting their political future on the line to show how intrinsically corrupted the system is; from the bottom to the very top.

Democracy for the sake of democracy has led to the system becoming repressive and manipulative, rather than being liberating for the masses. If PTI has to strive in this manner to get their shot at justice, how can we expect the common man to have any expectations of the system at a micro level?

Without strong state institutions to back democracy, Pakistan will continue to fall deeper into political chaos. Loans from the International Monetary Fund (IMF) and gifts from Middle Eastern friends might boost up the numbers for a year or two but unless there is critical reform at the grass roots, our survival will always be dependent on who wins the struggle for power in Islamabad. Hard to judge how much progress Khyber Pakhtunkhwa (K-P) made in just a year but achievements such as reforms in the police surely deserve a certain degree of admiration.

I may not be an ardent PTI supporter but anyone with any political sense should be able to recognise what Imran Khan has managed to accomplish amongst all this turmoil. Moving away from primitive politics, being fully committed to his quest for justice and calls for reform rather loans have led to him not only further engaging the youth but also inspiring a class that had become political dead.

The social strata that chose to remain disengaged with the system are now gradually beginning to become more alert towards it, irrespective of whether they are for or against PTI. Though many will say that this a small minority, such as middle class women and celebrities, just the mere ability to reach out to the people in the shadows of the system reflects Imran’s ability to be a genuine leader and statesman.

This is not an argument to rally support for the PTI; this is simply an expression of hope that we, as a nation, will look beyond what is projected in the media and grasp this as an important juncture in our political evolution.

A student at Georgetown University School of Foreign Service in Qatar and a research intern at the Research Society of International Law. He is interested in writing about political and economic affairs. He tweets as @mtaa324 (twitter.com/mtaa324)