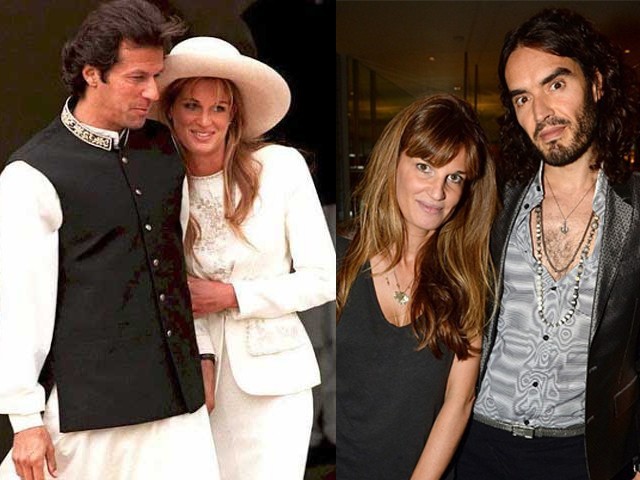 It seems like Imran Khan and Russel Brand have a lot more in common than Jemima Khan.

Brutally honest, charismatic, towering over six feet, pioneers in their respective fields and socially and politically active; these are just some of the adjectives that could be used to describe former cricketer Imran Khan and comedian/actor Russell Brand.

Mammoth success in their respective fields drove both men to give back to society. They are doing so by challenging the status-quo and by calling out a revolution.

It seems like these two have a lot more in common other than their involvement (at different points in time, of course) with the Goldsmith girl, journalist and Black Swan last Halloween, Jemima Khan.

Now let’s take an in depth look at the commonalities between the two modern day Robin Hoods:

Both possess chiselled jaws, dark hair and piercing eyes, and to top it off, their self-assurance and eloquence can convince you that the universe came into existence when a piglet sneezed stardust to the ether. Both have the quality of delivering speech that resonates deeply with the listener; barring Imran’s call for not paying taxes and Brand’s call for not voting.

In a world governed by social pretence and face-saving, it is a breath of fresh air to encounter those who bravely speak the truth and lay out their lives in the public eye. They have made political elements vulnerable and open to criticism for the sake of developing society into transparency.

Brand has been funnily and fearlessly vocal about his former drug addiction and Imran has been fairly honest about his personal life; which is absolutely unheard of from a politician in Pakistan, where honesty can cost you heavily.

Brand’s past life as a lothario is an open book, similar to Imran’s past multiple affairs.

But who can blame them?

Few can qualify for possessing the armour to resist the temptation of willing candidates. Both men stayed in a promiscuous rut for a while until they fell for, incidentally, the same woman. Although Brand had settled down prior to this, an intellectual mind needs another intellectual mind to find true satisfaction.

The youth believes in them

The young feel that they can relate to them, owing to their genuine concern, social contribution and compelling personalities. The young see in them, a reflection of themselves. Imran revoked the spirit of the Pakistani youth, and certainly the British youth has become more interested in politics as Brand discusses equality, empathy and justice.

Brand’s notion that we need laughs in politics is agreeable. After all, if you cannot enjoy someone’s speech, why would you take interest in their policies? Although, that is not necessarily a pre-requisite for being a good or effective leader; I mean, even Hitler had youth support. Yikes.

Power for love or love for power?

Could it be a case of needing constant doses of authority?

It has people wondering whether it is more of a case of power for self or power for the people. Perhaps it is a bit of both, in which case, I don’t mind at all.

Accused of displaying more intelligence than they possess

Many scholars, academics and so-called serious people say that these men display more intelligence than they actually possess. I don’t know whether this accusation is a result of their non-political careers or because of other factors. But, one cannot deny that they are raising voices for genuine issues.

Call for revolution but vagueness regarding implementation

Their ability to voice the concerns of the afflicted have won them the support of millions. However, their lack of specification in strategy has supporters equally confused. I guess the question now is would you count on good intentions and ambiguous plan-of-action or tried-and-tested yet not fully effective?

Of course, having more graver than the United Kingdom (UK), Pakistan is in a dire need for revolution or reformation. But improvement is what any country should strive for.

Here’s to hoping that Imran can bat out and Brand can mock down corruption from their respective countries, successfully.

A writer and fashion designer who has a knack for social observation and comedic critique. She aspires to empower women and children to explore their inner talents and brilliance. She tweets @HumayWMD (twitter.com/HumayWMD)

How travelling to Baku restored my faith in humanity

Wagon-wheel pasta: A little taste of Tuscany on your Pakistani plate

Is morality determined by the length of a woman’s blouse?