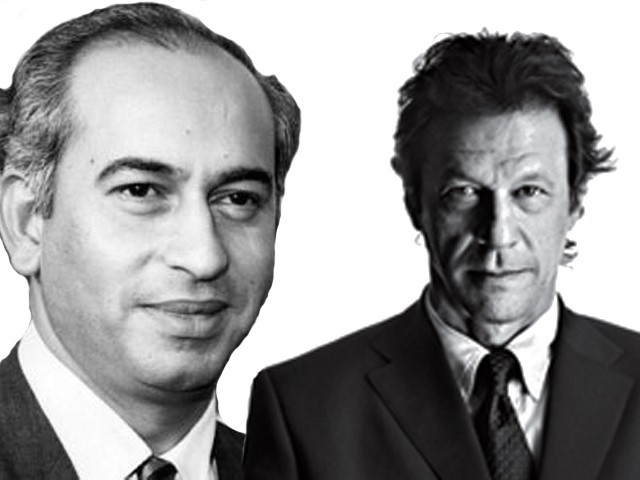 Bhutto became famous on national and international stage as a result of his politics. Imran was famous at a young age. He was a world renowned cricketer, a star and a celebrity.

“Meray saath larro gay?” (Will you fight alongside me?)

“Meray saath maro gay?” (Will you die alongside me?)

After reading these slogans, which personality comes to your mind in present day politics?

I am sure you have made the connection by now. If you have, it means one thing for sure: you too believe that Imran Khan’s followers have blind faith in him.

Imran is the second leader in the history of Pakistan who has aroused such emotions in his followers; the other of course was Zulfikar Ali Bhutto, the founder of Pakistan Peoples Party. The above mentioned famous slogans from Bhutto’s rally can still be seen and heard in grainy black and white PTV video clips.

Although I happen to see them every other year on Bhutto’s death anniversary, they still do not fail to move me. One can feel the passion.

It seemed easy at first look but comparison between the two leaders and their followers wasn’t that straight and, in the end, it makes a very interesting read. It can take at least a booklet for a complete analysis but due to space constraint I will mention briefly the similarities and differences both in case of leaders and the followers.

A critical analysis of the leaders reveals just one similarity: charisma.

I can understand some of you might be surprised by this but think for some time and I am sure you won’t find any other similarity, at least not worth mentioning. The differences are many though.

The top three in my opinion are:

1. The way they achieved fame and political power. The rise of Bhutto, in political terms, took far less time than Imran. Bhutto founded the PPP in 1967 and swept elections in 1970. Imran founded Pakistan Tehreek-e-Insaf (PTI) in 1996 and still has to sweep elections, assuming he finally will manage to do so.

Bhutto became famous on national and international stage as a result of his politics. Imran was famous at a young age. He was a world renowned cricketer, a star and a celebrity before he entered politics. In fact, Imran’s fame helped him enter the political arena. For Bhutto it is the opposite, his politics helped him achieve popularity and fame.

2. Political acumen makes the two dissimilar. Bhutto was so brilliantly astute one wonders if Imran is his antithesis in this field. I am not trying to pull Imran down here, everybody has qualities and drawbacks at the same time. And when it comes to reading the political chessboard Bhutto and Imran are poles apart.

One can see the most visible proof of this when party leaders whisper one thing or another in Imran’s ear every now and then during his speeches and press conferences.

3. Vision is another differentiation. Bhutto was a man with a vision. Imran has, what I would categorise as policies, not vision. Sometimes one feels as if Imran is still in the process of articulating his vision. He might give us one if and when he comes to power in Islamabad. It holds true both on the national and world stage.

I can recall the reply a follower of Imran gave when asked about Imran’s vision. She was hesitant at first then said,

It is clear after the above paragraphs that Bhutto’s image and appeal comes out stronger than Imran’s.

Again the debate is long but in my opinion the most prominent reasons are two:

– Public persona of the leaders is poles apart.

When one thinks of Bhutto, the persona, the image which appears is over bearing and self assertive. More precisely, he emits the certitude and definitiveness that is most crucial to succeed at this level.

Imran has developed a persona, especially after entering into politics, which can be described as vacillation. This image is getting stronger by the day. It seems as if he dithers and wavers at the most crucial moment, and has oscillated on make or break occasions which is more than damaging at the level he is operating. Imran went to Oxford like Bhutto, it might have done him good to have studied political science too like Bhutto.

– Bhutto and Imran are not the same when it comes to potential.

Successful leaders are two pronged, they do exhibit their potential but at the same time they are an enigma. This is a key factor on the road to become a legend.

Bhutto’s ability, before he came to power, seemed very potent and when he got power it seemed unending until his death, hence Bhutto the legend. Bhutto’s achievements are huge, vouching for his potential but one clearly feels, his critics included, that he could have achieved much more. That is Bhutto, the enigma.

Imran’s ability also seemed potent when he entered politics but even before he has attained power it seems dissipating and almost exhausted. One can conclude Imran was but no more is an enigma. It wouldn’t be so if the impression was that he is frittering his potential away. Sadly, the impression is that the potential has already been drained and used up. In Imran’s favourite cricket lingo, he has flair but he is not a match winner.

Once more my analysis concludes there is one similarity: blind faith.

The number of differences is multiple. Here are a few:

1. The first strikingly evident difference in jiyalas and insafians is the section of society they represent. The largest strata the jiyalas emanate from are the lower sections whereas Insafians belong largely to the upper sections of society.

The PPP had a popular appeal among the poor. The PTI has more resonance in the elite and upper income classes.

2. Jiyalas are politically savvy. Although the followers of Imran are educated and have a good IQ level, the majority of insafians lack political intellect. A jiyala is able to reflect on the political nuances despite being completely uneducated whereas a LUMS graduate insafian would usually find it difficult to grab the subtleties of politics.

4. Lastly, the combination of blind faith and appeal for policy is present in both sets of followers but the order is different. Let me make the point clear; jiyalas were drawn to Bhutto’s policy first which led to blind faith later. Insafians had blind faith in Imran first and they followed his policy as a result.

I hope that as a result the PTI brings a positive change in Pakistan’s politics no matter how turbulent the present line of action it might have taken.

Peace talks won't work. If they kill two, we must kill four