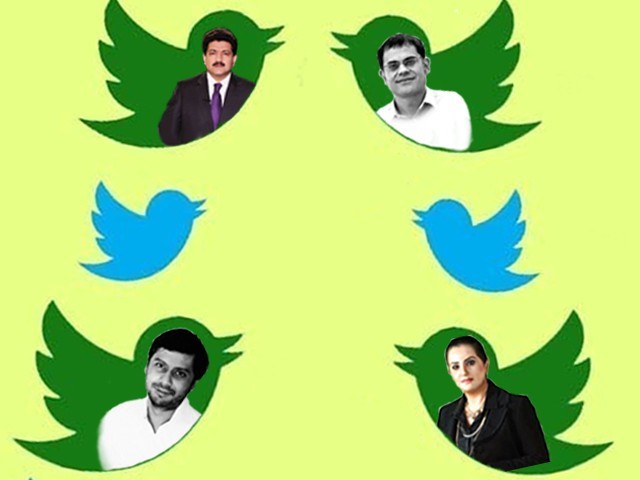 From the results, it is obvious that most of the journalists are emotional in their tweets and this clearly has a significant impact.

The events taking place around us affect our feelings, which as a result, affect our conversations throughout our normal lives. Since August, the prolonged Azadi march has been affecting the feelings of average Pakistanis on the road.

Being associated to the data-mining and text-mining field, I carried out a little experiment to explore the sentiments of Pakistani journalists who are reporting current events in Pakistan. I took journalists as my test subjects as ordinary people generally take their (journalists’) opinions seriously and even adopt them as their own. But according to the journalism objectivity principle, these journalists should remain impartial and convey only facts without including their feelings, emotions, opinions and political views along with the news. The result was rather interesting.

In academic literature, extracting the writer’s opinion or feeling from the text using the machine learning computational technique is termed as sentiment analysis or opinion-mining. Generally speaking, by using sentiment analysis, researchers try to extract the opinion or feeling of a writer, leaving behind only factual text. The attitude of the writer normally involves his or her judgment, emotional state and emotional effects that writers normally intend to convey to their readers. The results of this analysis appear as positive, negative, or neutral for every piece of “news” conveyed by writers or journalists.

Positive results indicate the writer’s happy mood and excitement while writing the text. Negative refers to the presence of sad emotions or negative opinion. When equal polarity of positive and negative sentiments exists in the text, it becomes difficult for the computational techniques to pass their judgment, and therefore refer to them as neutral. For example, if the writer is talking about somebody’s death, but doing so without expressing or including his opinion or emotions on the demise.

Twitter has become a famous tool to extract people’s personal and political views. Researchers in the US used Twitter data to understand people’s emotions during the presidential elections. It is due to the same reason that John Morton, who was a former newspaper reporter and is now the president of a consulting firm that analyses newspapers and other media properties, wrote an article on how social networking sites like Twitter and Facebook have changed the way journalists interact with the public. He says,

For a good journalist, journalism objectivity must be ensured. Journalism objectivity is the basic principle of journalistic professionalism and refers to the neutrality of the journalist. It ensures that he/she remains neutral without choosing to be on either side of the argument. That is when only the facts are reported for what they are.

In Pakistan, almost every journalist claims to be neutral. In this experiment, I put this claim to test via sentiment analysis using tweets of famous journalists in Pakistan so as to show how neutral their reporting is under the context of political activity regarding Pakistan Tehreek-e-Insaf (PTI)’s Azadi march.

Initially, I obtained the sentiments from some of the tweets individually.

Of Rigging: People conveniently forget that "Organized Industrial Level Rigging" is possible only when you have influence inside the system

Pirzada’s mood and feelings were detected as positive.

If this doesn't work out, Imran's sole recourse will be friends who have been promising him resignation on a platter.

The disappointment in Hussain’s tweet was concluded as negative. The sentiment analyser considered Hussain to be feeling rather sad whilst tweeting this text.

However, the sentiment analyser was unable to extract a positive or negative analysis from Mir’s tweets.

Clearly, it was difficult to conclude whether he was excited or sad. He conveyed the message but did not include any emotions or opinions.

Every tweet was carrying different sentiments, and so for the next stage, I collected tweets of journalists, who tweeted in August, and calculated the twitter profile of each journalist to understand what type of aggregate sentiment they are spreading amongst their followers. And the results of the experiment turned out to be quite interesting. The results of the sentiment analysis are shown in Table 1 and Figure 1 below.

Pirzada and Husain’s sentiments are obtained as most positive amongst all of their peers. Minhas appeared as the one who mostly displays negative sentiments in his tweets. For neutral sentiments, Mir tops the list. Not only did he top the list, but there were barely any positive or negative sentiments portrayed in any of his tweets, which proved that he is better at hiding his emotions and opinions as compared to his peers. Ahmad, Klasra, and Khanzada had similar results to Mir.

As per the results, it is obvious that most of the Pakistani journalists are tweeting with emotions and not taking into consideration the existence of journalism objectivity. And this is surely affecting their followers.

A journalist’s job is to be impartial and let the people decide for themselves which politician is correct or not. Our journalists should only convey the facts without their own judgments about the political events, parties or people.

If I manage to get time in the future, I will conduct an experiment to analyse the sentiments of the people responding to these journalists to understand how much their tweets affect the people reading them. Till then, I leave you with the results of my current experiment to ponder upon journalism objectivity.

A PhD candidate at North Dakota State University (USA) and a lecturer at COMSATS, Abbottabad, Pakistan.

Hate taking notes in class? Use the Cogi app!