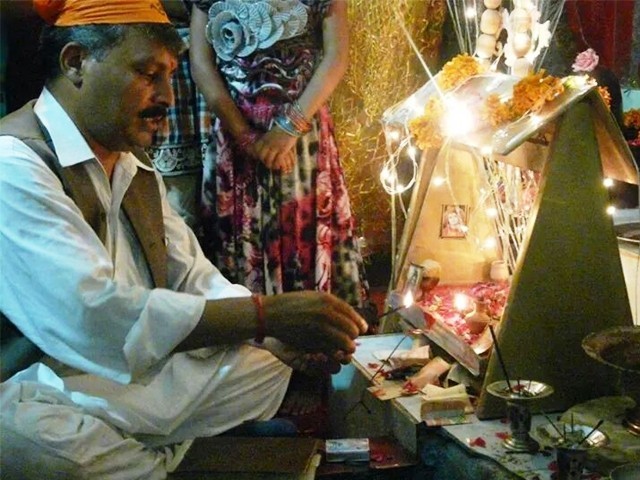 There were children playing around and women, in colourful clothes, chanting bhajans together. As soon as I entered the temple I noticed a Pakistani flag, along with other decorations, and men wearing small Pakistani flags on their shirts. PHOTO: SADIA WIDAD

This year I had the opportunity to participate in the Janmashtami festival, the Hindu festival in which they celebrate the birth Hindu god Lord Krishna, the eighth avatar of Hindu god, Vishnu. The festival is celebrated on the eight day of the Krishna Paksha (dark fortnight) in the month August or September.

As I entered the Gracy Lines area in Rawalpindi, I asked for directions to the Balaknash Temple, an 82-year-old temple that will be demolished soon along with 53 quarter houses. It is surrounded by FWO flats. As a guard at the check point told me where to go, he asked inquisitively whether I was a Hindu. I said ‘what do you think’ with a smile, and walked towards the temple.

Outside the temple I met Mr Ramesh Bhatti, whose father is the guardian of this temple, who took me inside. There were children playing around and women in colourful clothes chanting bhajans together. As soon as I entered I noticed a Pakistani flag, along with other decorations, and men wearing small Pakistani flags on their shirts. It was evident that, though a minority, these people are proud to be a part of Pakistan. It reflected the love in their hearts for a nation that they consider their own, despite being at the receiving end of hostility, all too often.

While enjoying the energy of the temple, I saw an elder lady sitting on one side with two disabled kids beside her. All those who were coming to the temple, after paying regards to Lord Krishna, were also going to her to pay respect and take her blessings. I went too, and after paying my regards, I asked her what she felt about the demolishment.

Siwaa, who is 73-years-old, told me that their hearts were in pain because, after this legal notice, they know it’ll be difficult to not only rebuild the houses but rebuild this historic and treasured temple, that will be lost at the hands of religious intolerance. She questioned why they were considered less than the religious majority citizens of this country, considered any less Pakistani only because they were Hindu. She told me they saw themselves as a part of this land and could lay down their lives for Pakistan.

Why then, can’t they be equal stakeholders in Pakistan?

Rani Shoukat, another lady present there, said she feels they are unwanted here and are anticipated to leave, even though their elders have been living here for the last 102 years. She told me, with tears in her eyes,

“I was born here and got married here. Now, if we will move to another place I don’t think we can settle down. I have this fear because one of our family members left this area and tried to find a house for rent somewhere else, but they had to declare themselves as Christians there because the neighbourhood didn’t want a Hindu family.”

Mr Bhandara, a member of the National Assembly who works for minorities, said,

“This does not come under the Punjab Government, it’s under the Cantonment Board. So we are negotiating with the authorities, let’s hope things settle down. If they move from this place, which is relatively safe for them, how can we guarantee their safety considering there is hardly any place with religious tolerance left?”

Moreover, Mr Ashok Chand, a teacher, told me that they received a legal notice on August 12th that was issued on July 18th, 2014. He added that,

“In block 141, Gracy Lines Chaklala, there are a total of 53 houses; inhabiting Hindus, Christians and Muslims, who have been living here for almost 102 years. All we want is that they don’t move us from here and let us live near our temple. We don’t want to leave the place just because some people want to build a residence for themselves.”

While talking to Ashok, we saw stones falling from the adjacent building being demolished. He ran outside to warn the children who were playing, to keep them from getting injured. Ashok calls their state ‘living like slaves in an independent country’. And as much as I want to disagree with him, I cannot.

The religious minorities in Pakistan have exhibited harmony and pride in being a part of this nation. Then why are we adamant on making them feel like outsiders? Why is it that they struggle to find their rightful place even today? Only if we succeed in making them feel secure and free will we be able to ensure a prosperous future for Pakistan. Let them stay – our Hindu Pakistanis deserve a home just like every Muslim Pakistani does.

A radio journalist who has worked in development media sector as a media trainer and mentor. She tweets as @swidad (twitter.com/swidad)

Living with polio in Pakistan

Do I have to become Muslim to survive in Pakistan?

In Hangu, are teachers a specie quickly going extinct?