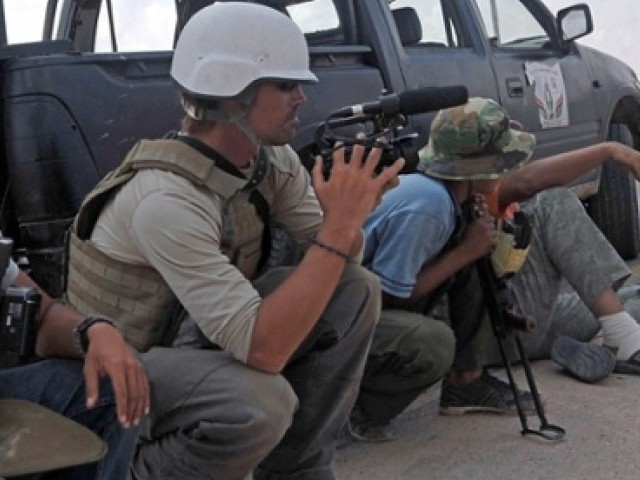 This was the second time Foley had been kidnapped, while on duty, by a group of militants. PHOTO: AFP

The search for James Foley, by his family members, began when he was kidnapped in Syria on November 22nd, 2012. After a long wait and dispersion, the quest has come to a devastating end.

This was the second time Foley had been kidnapped by a group of militants. In 2011, he and fellow journalists were abducted while in Libya but were later released. Then, while working in Syria, he was captured again, only this time he was not as lucky. Foley was reporting on the suffering of the people of Syria. On Monday, a video called ‘A Message to America’ started circulating on social media platforms allegedly showing the beheading of photo-journalist James Foley by the ISIS. The ISIS claim that Foley has been beheaded as a repercussion of the US bombing of the ISIS in Iraq. Also in the video, another American citizen, reportedly a contributor to the New York Times, is said to be ‘next’ if ‘Obama doesn’t change his decision’ – a message conveyed by a masked man wearing black, speaking in, what is purportedly, a British accent. However, the authenticity of the video tape is not yet confirmed. In reaction to this video the United States’ National Security Council said,

“If genuine, we are appalled by the brutal murder of an innocent American journalist and we express our deepest condolences to his family and friends.”

It was extremely distressing, however, to read the reaction of Foley’s family on Facebook. They wrote,

“We have never been prouder of our son, Jim. He gave his life trying to expose the world to the suffering of the Syrian people. We implore the kidnappers to spare the lives of the remaining hostages. Like Jim, they are innocent.”

Think about this for one second. You are a merry family, living together peacefully; one of you leaves for work and never comes back. Ever. Gone with the wind. How painful must it be for the family not only to know that they will never see their child again, but to watch a video in which he is brutally beheaded; a video in which he expresses his grief at not being able to see his family one last time – clenching his teeth in fear. Think of the family that waited so long with the anticipation, and hope, that someday they will see their beloved once again. The excruciating pain that the family and friends must have had to endure is only a fraction of what is felt by me and you today – and we are complete strangers. This incident took me back to the killing of the Wall Street Journal reporter, Daniel Pearl, who was kidnapped and slaughtered in Karachi in 2002 by Omer Sheikh supporters. Daniel’s wife, Mariane was expecting when he had been kidnapped. It makes me anxious just to think of how difficult it must be for the families of these brave individuals.

No religion allows you to kill innocent people for the sake of retribution. It is against the preaching of any faith and Islam clearly states that killing one innocent person is equivalent to killing humanity. The message being spread by the fascist group, ISIS, is no where near the true face of Islam – if anything; it is contradiction to everything taught by our religion. I am not here to defend my religion, I do not believe that is required – Islam does not need to be defended, it is very clear. Nowhere will you find Islam advocating the destruction of shrines, the instigation of terror or the decapitation of humans. No Muslim can kill so ruthlessly, no matter what gigantic loss they may have suffered in their past. Islam, since its inception, has always practiced tolerance, respect, generosity and love for everything living. Where has this sense of benevolence gone? What has come over these people? The fact that religion is being used to disguise and further their disgusting agenda is revolting. Since when has it become so easy to kill someone? Since when is ‘hating’ another based on religion okay? Why is it so hard for us, as a human race, to live and let live? Killing Muslims and non-Muslims, alike, is getting you a first-class ticket to hell. Please do not be mistaken, this path will not lead you to paradise. Learn about religion yourself! Don’t rely on anyone else’s interpretation of it – you were given a brain for that reason.

Coming back to Foley, I want to applaud the courage of journalists like him who have sacrificed their lives in the way of humanity. They are the unsung warriors of the world and they deserve more than we can ever give them. My heart and condolences go out to all those families and friends who have had to endure pain and suffering through these dark times. Humanity stands by your side.

Scotland referendum: If they can have it, why can't Kashmir?