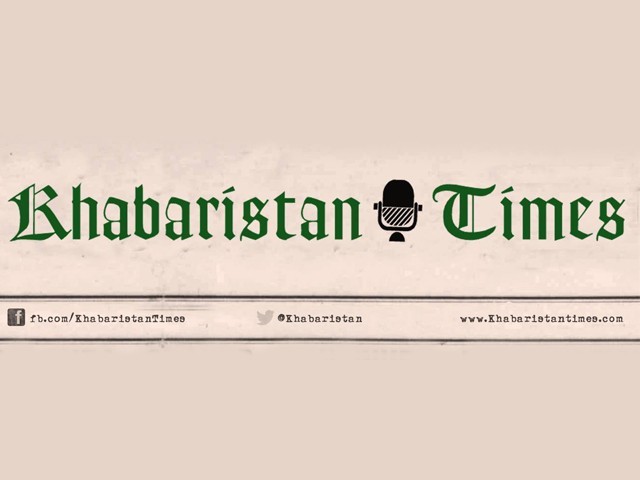 It is yet to be seen if Khabaristan Times would be able to keep the funny coming, or be lost in monotony with the passage of time. PHOTO: KHABARISTAN TIMES

Five years ago, I came across a very strange news story titled,

Gaping with horror, I delved into the details quoting none other than the astronaut himself claiming how he may just have been hoodwinked into believing the moon-landing was real, although it wasn’t.

More ludicrous was the reason cited as being the cause of disillusionment for Neil; an elaborate YouTube video that was prepared by a conspiracy theorist. Questioning all that was real, I immediately Googled to find other news sites claiming the same to convince myself of the veracity of the news.

Sceptically, I went back to the website that had published the story. It was on reading the ‘about me’ that I discovered written in bold,

“Onion is a satirical news site presenting fake news like never before.”

This was my first exposure to a novel genre of news. A fresh whiff of air in an otherwise drudgery infused world of news, here was a site which took just kidding to a whole new level. It presented fake news in such realistic manner that many an international news publications have been deceived into believing them to be real, having been quoted from USA to Iran, Bangladesh and beyond.

In the process it laid bare the human gullibility, as much as the inanity, that mankind is capable of on a daily basis.

Hooked onto the idea of ridiculing the social interactions and the ever-growing plethora of news emanating from myriad news sites, I have been an ardent fan of the Onion ever since.

There, however, was one thing amiss. Being based in USA, the Onion was always a little too alien for me and resonated only at a superficial level. I could not connect to it. No such commentary was available on Pakistani society, until I stumbled upon my recent discovery.

A friend shared one of the funniest pictures depicting a very different take on the two long marches, Azadi and Inqilab marches, running simultaneously. On checking the Facebook page I realised this was much bigger than a mere meme page.

It was an Onion-like news site with the same raison d’être and a similar idea; well-tuned into the Pakistani environment and politics. An initiative by eminent satirists, Khuldune Shahid and Luavut Zahid, it has been dishing out stories that are guaranteed to bring a smile to your face and help you gain an entirely new perspective to the hot topics within the society.

Be it the social commentary on issues concerning the nation, or playing dumb with the conspiracies that keep emanating ever so often; it employs a fine amalgam of wit and ingenuity to put its point across. It even has space for Onion like fake surveys (that prove little), so as to bring to the public an understanding of what not to believe.

The idea behind the site is simple; to allow the Pakistanis to see the funny in the gravest of issues concerning the world and at home, and for a change take life a little less seriously.

In doing so it also establishes one thing very subtly: in a world of growing influence of social media, one should not believe everything he/she may come across on news publications or otherwise. Since it has become easier than ever before for an individual to manipulate words of another, to misattribute quotes, or cite unnamed sources to put across an argument with no logical footing.

Agreeably, it may be too soon to draw parallels with an established site as Onion; the work hitherto produced by the news site has been at an absolute par. It is yet to be seen if Khabaristan Times would be able to keep the funny coming, or get lost in monotony with the passage of time.

But don’t take my word for it, take a peek at the stories on the website or the Facebook page, and decide for yourself if it is indeed as clever as I feel it is.