Wait, what about Zarb-e-Azb? 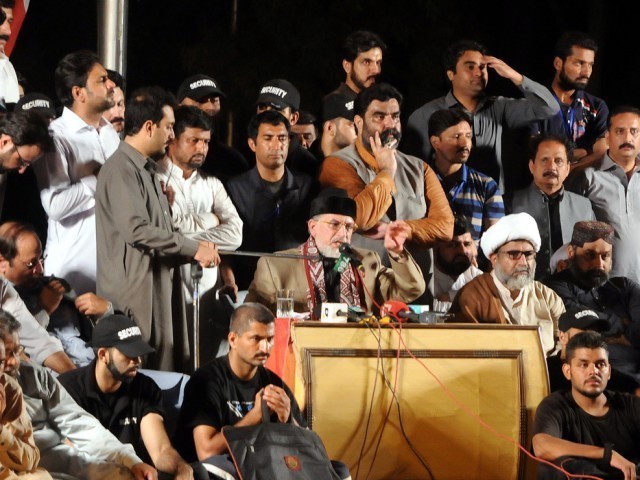 Anti-government ‘clerics’ have no substantial place in politics, and as long as they do – these issues can’t be resolved. PHOTO: FILE

This August has been defining and shaping a lot of things for us Pakistani’s, nationally and globally. I, for one, am neither a supporter of Imran Khan and Tahirul Qadri, nor am I a non-supporter. I am just a Pakistani who wants betterment for my country; I don’t care who brings it, but I seek progress.

With the long march that has been initiated by Imran Khan, and has resulted in Tahirul Qadri bringing on his own revolution, I feel that there are certain things that need to be analysed carefully.

On Saturday, August 16th, 2014, Qadri announced a 48-hour deadline for his 10-point charter of demands to be accepted by the current government for revolution. Well those 48-hours are long gone and nothing much has happened regarding the announcement that the Pakistan Awami Tehreek (PAT) leader gave out.

I went through the 10 points of Qadri’s revolutionary manifesto that were presented in the agenda that he wishes to implement. The highlights of these points and their analytical viewpoint are as below:

1- Every homeless will be given a home. Every homeless family will be given 3/5 marla residential plot for free. They would be given interest-free loans for the construction of these houses which would be returnable from 20 to 25 years. Those families, who do not have financial means to return these loans, would be handed over keys of constructed houses.

If this has to come into complete affect, does Qadri realise that the economy could collapse? Unfortunately, there are scores of homeless people. Interest-free loans would mean that if someone is buying a house for, let’s assume, Rs 10, by the time this amount is returned to the State Bank, the value of Rs 10 would’ve dropped down to Rs 2. So the government is at a loss of Rs 8. How can this even work out in an economy that is already in such distress? Moreover, how does Qadri expect ‘homeless’ people to even have the finances to construct a house? – Just logical reasoning.

2- Every person would be given employment or employment allowance. The youth would be helped in career counselling and planning for their jobs. The practice of making them beggars, indebted or loan defaulters would be discouraged and discontinued.

As generous as this point is, it is utopian. It can ‘only’ come into effect if Pakistan achieves a certain level of progressive economic activity. If there are no jobs, is Qadri going to give employment in his home and businesses? And if employment allowances are granted ‘somehow’ under the prevailing circumstances, then don’t we see an apparent rise in taxes?

This point bewildered me. Those who have less than the stated income in the point are expected to go to grocery stores with their employment contracts? How do they prove their monthly income each time they go to purchase everyday groceries? Does Qadri have another scheme for this problem? Moreover, why would any vendor sell at a lower price to a designated class? If this point comes into effect, there is no doubt that they would be at a loss and might even leave the market, resulting in an economic collapse.

4– All taxes will be eliminated from the gas, water and electricity bills for lower middle class and they would be required to pay half of the exact amount of these utilities.

Dr Qadri, who will decipher what segments of the society are part of the lower middle class? Furthermore, why is it that they have to pay half? In Pakistan, the poor and the rich have an equal share in this regard. Everyone has an equal part in paying utility bills on a price that is the same for the entire country. How about modifying this point and cutting the utility bills into half for the whole nation?

5- Official insurance scheme would be introduced and the poor would get free medical treatment.

Again quite generous of Qadri to point this out, but I’d like to know who decides who is poor and what procedures are to follow to implement this. Moreover, this is surely a highly dense way of reforming the health sector in Pakistan that is already not equipped enough to deal with proper medical care.

6- Education up to matriculation will be free and the parents would not be able to keep their children deprived of education. The students desirous of higher education would be given opportunities to do so and their admission will be ensured as per merit.

If this point is to come into effect at all, can someone please tell me who will pay the teachers who will teach for ‘free’ up to matriculation? Is Qadri aiming at higher taxes again in this point, because as much as you may disagree, no one is willing to work for free with the current inflation of our economy!

7- Pakistan’s total area is 200 million acres. Out of which 100 million acre is cultivable. Half of this land is under private ownership while the remaining 50 million acres would be distributed among the poor.

Half of the land that is cultivable might be under private ownership. But why should the poor have the remaining 50% land distributed to? I’m not poverty stricken, but I don’t own a private land that’s cultivatable either. So should I not demand a portion of that 50% to be distributed to me as well and I’ll hire some farmers to cultivate it. But then I’ll also make big bucks out of it. So how does Qadri aim to resolve the disparity that can result from this point?

8- Sectarianism, terrorism and extremism will be eliminated. Ten thousand peace training centres will be opened for training of the people. Syllabi of religious seminaries would be revised and amended.

This point had my nerves stretching. All of the three issues that Qadri has addressed in this point can literally only happen if Pakistan becomes ‘faith-blind’. That means that the State has absolutely no concern with any religion and it permits everyone to practice whatever faith they want. The State steps in only if religious activity disturbs the public. How I wish that could happen. Since the bygone days of Jinnah it hasn’t happened, now Qadri will bring about this change? I’d like to see that day. There will be a divide between religion and State with this point.

If Qadri truly wishes for this to come into effect then he must first resign from Minhajul Quran, and then abolish any religious affiliations (including management and financial). He will have to let go of his religious legacy or whatever it is that the, “Stalin, Lenin and Karl Marx”, of Pakistan has in accordance with religion. He should come into politics as a political leader who is also ‘faith-blind’. Anti-government ‘clerics’ have no substantial place in politics, and as long as they do – these three issues can’t be resolved.

9- The women will be given opportunities for respectable employment in the form of domestic industrial units. They will be given complete socio-economic security by doing away with discriminatory laws.

I’m grateful that Qadri thought of women in his speech, but you see, as thoughtful as this point is – it is a social issue not a political one. The State can only assist by reforming the society; a government cleric cannot form a fair and free society that would permit this point.

10- Disparity in the pay structures of all senior and junior public and private sector employees will be minimised to possible extent.

Qadri needs to realise that the ‘disparity’ is there due to the education level in the country. Employee entrance is also a fact that he needs to consider. Junior public sector employees are generally less educated. If this point of his is to come into effect then a grade 21 provincial secretary should also get a salary that is equivalent to that of a top manager of a multinational firm.

Dr Tahirul Qadri’s 10-point agenda feels great to read, but can it really be implemented is the question. Furthermore, Imran Khan’s march has resulted in various opinions from both pro and anti PTI supporters. Giving a call for civil disobedience to a country after preaching that law shouldn’t be broken is a question best for analysts to answer. However, I appreciate the fact that Khan stood his ground and has decided to resign from all of his party’s seats in the national assembly. I don’t know if taking his march ahead to the red zone area would be a good initiative, but the government should hold mid-term re-elections and have this rigging business sorted out once and for all.

As I end, I wonder what our nation’s citizens are truly made of. When Zarb-e-Azb started, there was such fervour and zeal amongst the people. During this August, with Qadri and Khan embarking on the ‘Long Marches’, I wonder where all the “jazba junoon” for Zarb-e-Azb has gone off too? Does anyone know that only today, 30 militants were killed with seven militant hideouts being destroyed by our honourable forces? I suppose that’s not as important as those 147 Qadri and Khan supporters being arrested last night. When will we gain a balance with our chosen priorities?