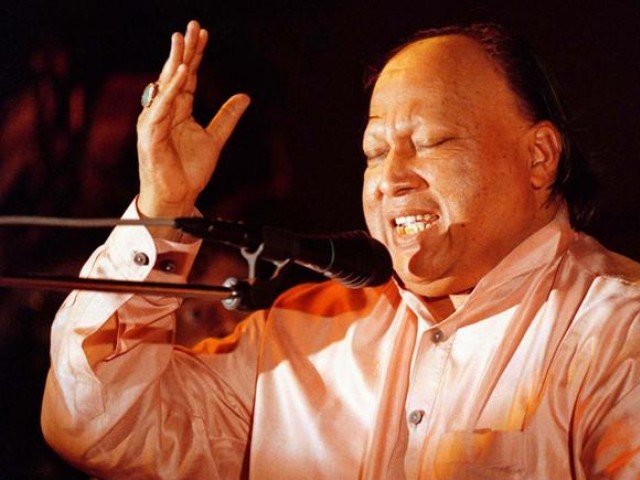 The aura he could create during his performances was something uncanny and unparalleled – a beautiful blend of modernity and tradition. PHOTO: REUTERS

There are some voices which are dependent on words in order to get heard and appreciated, and then there are those, self-sufficing ones, upon which words cease to exist – the unsurpassed ones. Words perish and what remains is the triad of voice, revelation and a standstill universe. Such is the case with Ustad Nusrat Fateh Ali Khan. His voice has transcended the realm of words.

“I am a peddler, wandering and roaming from one village to another, in the lanes of cities, in the countries of the world, offering the message of peace, wishing to continue to do so all my life. And after a lifelong wandering when I reach my destination, may the slavery of Allah (SWT), His Prophet (PBUH) and Ali (RA) be the tiara of my head, shining like a star.” – Nusrat Fateh Ali Khan

Such was the saintly humbleness of the man who touched millions and was called ‘Shahanshah-e-Qawwali’ (King of Kings of Qawwali). The man who was pooh-poohed, at first, on account of his shrill voice, made people around the world scream in joy and ecstasy when he would weave ragas in the air as effortlessly as they breathed. People shot the verbal barb of obesity at him, ridiculing him in whatever way possible; today, qawwali owes its international recognition solely to him.

Featured in the 1997 issue of TIME magazine. Photo: File

Born to a family who had held aloft a 600-year-old tradition of qawwali, Khan was the fifth child of Ustad Fateh Ali Khan, a musicologist and qawwal. It was not until March 23, 1965 on the occasion of Jashan-e-Baharan – a music festival held by Radio Pakistan – that Khan came into the limelight. Among the listeners in the studios were great artists like Roshan Ara Begum, Ustad Salamat Ali, Nazakat Ali Khan and Amir Ali Khan. As the recording approached its zenith, the ustads in the studios smiled. And so did Ustad Fateh Ali Khan, in the heavens.

The star had come to the stage.

When Khan started his career, it was the period of mass awakening and social upheaval. Movements in East and West Pakistan had turned everything upside down. Dictators had been sent home and people were more politically conscious than ever. It was amidst this environment that qawwali made its way to streets and bazaars from the elite drawing rooms.

People in the streets could instantly relate to the music that had been playing in the shrines of saints for centuries. The sound was not alien to the local soil. From the courts of Balban and Khilji, Amir Khusro had made his way to the streets of Pakistan through audio records.

Those were the days when Sharabi and Tajdar-e-Haram began echoing through the bazaars and alleys. Aziz Mian and the Sabri Brothers were shining like stars in the sky of music. Only a naïve person or a dreamer could take the herculean task to compete with such qawwali giants.

And then it happened.

It was the Amir Khusro Festival, on the 700th anniversary of the great genius, organised in 1975 by Pakistan National Council of Arts. Along with writers and intellectuals, qawwals were also invited in Islamabad to pay homage to the maestro. Khan arrived when all the popular and well known items were already allocated to other qawwals. What Khan chose was, surprisingly, a rare and less known item by Amir Khusro: Main tu piya se naina laga aai re (I’ve just had an affair with my darling)

It was something new for the audience. People were enthralled.

This was followed by Haq Ali Ali – which later became the signature qawwali of Khan – and it created a spiritual aura in the auditorium. So captivating was the performance that Faiz Ahmad Faiz, Muhammad Ali, Hafeez Pirzada and other dignitaries came to the stage and joined the great qawwal. With that performance, Khan had officially entered the competition.

Khan performed extensively at shrines and festivals across the country. His unique style of qawwali, wherein he would add verses in counterpoint and come to refrain by improvising ragas in falsetto, touched listeners and critics equally – like a magic wand. The aura he could create during his performances was something uncanny and unparalleled – a beautiful blend of modernity and tradition. He had a complete mastery on singing khyal, thumri, ghazal and classical ragas.

In an interview with Enzo Gentile, an Australian correspondent, Khan made it clear:

“I cherish the tradition of classical music more than my life. I consider its protection and preservation as my spiritual duty… I use western musical instruments because I believe that you can dress up a pretty child in any clothes and it will be still pretty. But the more important thing is that the child should not get injured while putting on those clothes.”

Art binds people together and aids in healing the wounds of humanity. Otherness is the last thing that can exist when love is celebrated through art and music. Lovers danced and grooved to the tunes of inclusiveness when Khan sang love.

Performance at Lok Virsa, Islamabad, with his crew. Photo: File

Hard times had just begun. Petrodollars had just started pouring in with the commencement of the Afghan War. Khan’s performances were perhaps the last of large public gatherings in Pakistan which celebrated the spirit of mutual respect and love – a hallmark of Sufi traditions.

Khan’s love and adoration for God, His Prophet (PBUH) and his progeny was in essence an inseparable part of the syncretised Islam that had evolved over centuries in the subcontinent. Sectarian bloodbath was still in the offing and chanting the name of Hazrat Ali (RA) was still not a crime but an act of reverence that reverberated through the world with the release of Dum Mustt Qalandarr Mustt Mustt in 1990.

Peter Gabriel, the creator of Real World, played an important role in introducing Khan to the world. It was in 1985 when Gabriel was composing the music for Martin Scorsese’s masterpiece The Last Temptation of Christ that was released in 1988. He was in search of a voice that could give power to the agony of Christ in a scream and yet adhere to the rules of music.

Who else, if not Khan, could scream the agony of the East and that too adhering to lofty ragas? Khan put his entire musical heritage into service and manipulated Raag Darbari to complete the task. What came into being was something indescribably haunting yet beautiful.

Khan performed in 1985 at World of Music, Arts and Dance (WOMAD) festival in London. After that he toured extensively, mesmerising the audience in over forty countries. This is what David Sly, a music critic, had to say about Khan after the Adelaide festival in 1992:

“To naïve ears, Nusrat’s exalted, euphoric delivery of qawwali is new and exotic. But such terms draw a warm smile from the massive Pakistani, who can trace the origins of qawwali through seven centuries of Muslim culture.”

So much has changed since David Sly had passed these remarks during the heydays of qawwali. Under the influence of puritanical strain of religion and parting ways with indigenous cultural expressions, religion is increasingly metamorphosing into an individualised identity issue. Through this course, the cultural edifice of our part of the world, which has significant religious constituents, is bound to become redundant, giving way to what is debasement of the culture. The past few decades have seen regression in all forms of art and qawwali is no exception.

A case-in-point is Ali Farka Toure of Mali, who was one of the most internationally renowned African musicians ever. Khan was a great admirer of Toure. In August 2012, Movement for Oneness and Jihad in West Africa (MUJAO) imposed a ban on music in Northern Mali. Music has been an integral part of Malian culture for centuries. A remark from Afel Bocoum, a singer and Ali Farka’s oldest musical sidekick, pretty much sums up the unfortunate state of affairs:

“I know that if you were to wake Ali out of his tomb today, he would just go straight back into it… And I am sure his life would be in danger if he was alive today because there was a stubborn man who would want to carry on playing music whatever happened.”

August 16 marks the death anniversary of the man who spoke music. Qawwali is indebted to him and so we are. And so is Pakistan.