Can Saeed Ajmal break the ‘curse’ of being the best bowler of Pakistan? 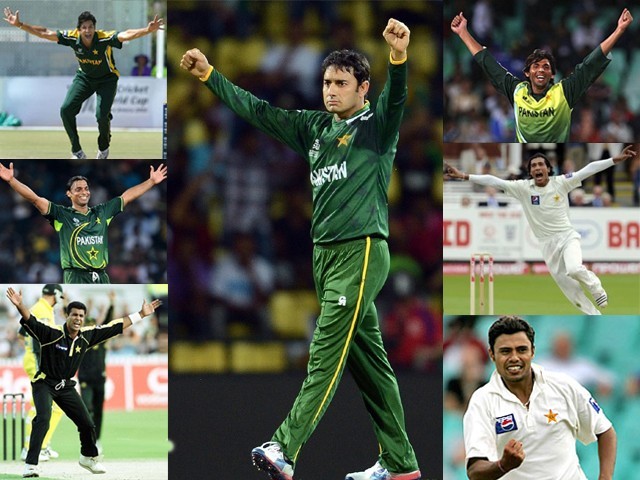 Saeed Ajmal is different from his predecessors and has mostly had a controversy free career so far. He deserves much more than to be swept aside by the curse.

Over the course of several decades, one constant factor in Pakistan cricket has been the quality bowlers it has produced. From masters of reverse swing to the fastest bowler in the world, and from subtle drifters to the inventor and master of the ‘doosra’, Pakistani cricketers have added magic to the art of bowling. Cricket would be a much different game without the bowling contributions of our players. It would have been more of a batsman’s game with much less flair. But at the same time, to be the best bowler of Pakistan is a truly cursed position.

Our masters of swing, Wasim Akram and Waqar Younis, had their fair share of controversies in their time. From match fixing to captaincy tussles and fights, they have seen it all. Wasim was even accused of ball tampering as early as 1992.

Undoubtedly, they are two of the greatest fast bowlers the world has ever seen, and very widely respected all across the cricketing world. However, their careers did not come to the ceremonious end that their talent justified. They were both amongst the eight players who were sacked by the Pakistan Cricket Board (PCB) after the disastrous World Cup campaign in 2003, with their last match being a sad rained-out match against Zimbabwe which got Pakistan kicked out of the tournament. Neither Wasim nor Waqar bowled a single ball in that match.

Don’t even get me started on the career of Shoaib Akhtar. The list of controversies deserves an article of its own. Fights with team members and the PCB, drugs, girls, steroids, ball tampering, anger issues, the list goes on and on. He truly was “controversially ours”. Shoaib’s career was full of magic moments, but consistency and Shoaib were true opposites. His last over in international cricket saw him get whacked for 28 runs by Ross Taylor during the last world cup, ensuring an end to his world cup campaign and to his unstable career, putting him out of his misery.

In more recent years, the curse hit Mohammad Asif and the young Mohammad Amir. Controversy wasn’t new to Asif, with prior bans due to fighting and drugs, and even a scandal involving the infamous Veena Malik. Amir was just starting his career, destroying the English batting line-ups in their home ground. But the curse caught up with him as well with the spot fixing scandal, taking away two of the best bowlers of recent time.

Even our majestic spinners like Saqlain Mushtaq (whose last bowling figures were 1/204) and Mushtaq Ahmed did not get the career finale they deserved. The bad seed, Danish Kaneria, just got his appeal refused after getting a life ban for spot fixing. Plagued by controversies, the curse of being the best bowler of Pakistan has caught up with pretty much all of them.

The latest to suffer this curse is the current best bowler of Pakistan (and arguably the best bowler in the world), Saeed Ajmal. He has been reported again for suspect action and runs the risk of a ban from bowling if he fails to clear the mandatory tests in the upcoming weeks. He has already been cleared once in 2009 but this recent accusation is in line with the ICC’s tougher stance on weeding out “chucking”. Misbahul Haq and PCB have been playing down this issue, but with Sachithra Senanayake’s recent ban, there is a high chance that Ajmal might suffer the same fate.

So will the curse win again?

Hopefully not, as Ajmal is different from his predecessors and has mostly had a controversy free career so far. He is not a cheater who’s been accused of tampering the ball and neither is he a corrupt match fixer. He stays away from drugs, gets along with his team very well and is not hungry for captaincy or power. Simply put, he’s just an extremely talented bowler who goes about his love for the game and shows his skills where needed most. Despite Amir’s young age and naivety, he brought his punishment upon himself. But Ajmal cannot be held responsible for the natural arc of his elbow when he’s bowling; he’s bowled this way all his life!

Ajmal deserves much more than to be swept aside by the curse. While he still has a lot to prove before we can bestow upon him the title of Pakistan’s bowler of all time, he certainly has the best personality and track record as compared to his contenders. May he be the chosen one who manages to break the curse and goes on to have the illustrious career and a fitting finale that he truly deserves!

Coder and cricket enthusiast who occasionally enjoys a dip in the political pool. Born and raised in Pakistan, he is currently studying Math, Economics and Computer Science at Dartmouth College in the US.

In our PM's words: And why don't they leave then?