Mr Prime Minister, is your government really the emblem of economic progress? 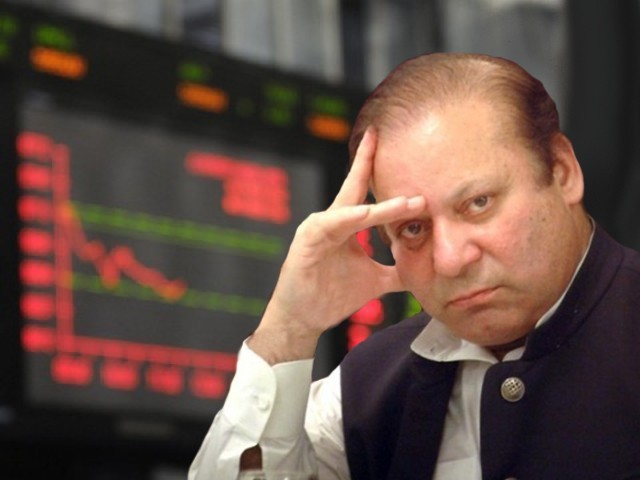 While you continue to give speeches on how your government is the emblem of economic progress, the common man's miseries are being compounded due to political instability.

Forget, for a moment, that your panic and desperation resulted in the nation giving unnecessary attention to Tahirul Qadri. Forget the fact that once again the law enforcers in Punjab, under the umbrella term of law and order, put behind bars thousands of workers of the political parties that were giving you a tough time. Forget, for now, about the fact that what would have been just another march or protest became even bigger because you dug a hole for your own government’s future by over-reacting. Let us even forget for a moment that this political mayhem has us wondering whether democracy will once again fall prey to selfishness of our leaders.

In this minute, I just want you to think for a moment of a man, any man of Pakistan. Let us call him Javed from Punjab. Javed is a heavy duty vehicle driver. He sets off in the morning, driving a container full of perishable dairy items like milk and yogurt. But midway, on a certain highway in the country, law enforcers stop him and impound his vehicle after telling him to get down. His daily wage of Rs1000 is lost because when his vehicle is taken away, what will he drive and how will he earn?

Now where does Javed’s container full of milk and dairy products end up?

That is anybody’s guess.

The containers that are being used since last week or more to seal roads, motorways, the Federal Capital and Model Town Lahore, have not appeared out of thin air. Containers of so many Javeds’ are stuck in no man’s land.

But in this story, Javed is not the only one who suffers. Dairy product industries take raw milk from milkmen in Pakistan’s rural areas. There is an element of both ingoing and outgoing logistic in this business. With no truck or container coming to pick up the milk, what will the milkmen do with that entire raw product they have collected?

Mr prime minister, you know better than me that a majority of Pakistan’s masses live on daily wages. So the milkman does not sell that day’s milk and has no money for the day with which he usually buys food both for his family and cows.

Is this all a hypothetical story cooked up by a frustrated blogger?

This is something that should have been a major story in the newspapers but is not, because no one wants to be quoted as they are afraid their business will suffer the consequences if they say it all out openly. A disgruntled CEO of a consumer food goods industry, on condition of anonymity, said,

“Our containers are impounded. The consumer goods we supply, especially perishable items, are going to waste. Blocking highways and also provincial borders means movement is restricted, which means daily earnings of people are affected.”

With all of the restrictions being placed on movement, the quantum of the country’s business is adversely affected. As a result, the cash flow has slowed down. The inter-country movement of people and goods has slowed down. Resultantly, the daily wages of the common man are affected. The aforementioned CEO further added,

“Once this quantum slows down, it is a known phenomenon that business will not bounce back easily. If these restrictions are in place for a week, the adverse economic effects will last for months.”

Hoarding in panic is something every other household who can afford it has been doing. This is literally resulting in empty shelves. Food availability and supply is getting affected. And yet the government continues to remain in a bubble.

The country’s economic jugular vein is Karachi and its stock exchange tells us how the country’s economy is faring. The Karachi Stock Exchange (KSE)-100 Index dropped 4.46% amidst political uncertainty on August 11, marking the biggest ever plunge of the equity market within a day in terms of points. The benchmark index lost 1,309 points by the end of trading of the same day and closed at 28,071, as reported in The Express Tribune. The decline was the biggest in a single day in terms of percentage since February 2009, with 100 stocks hitting their lower circuits, which is the maximum value by which a stock’s price can decrease before its trading is suspended for the rest of the day. The rupee is once again weakening, as currency exchange rates can tell you.

Another recent report says that the All Pakistan Textile Mills Association (APTMA) has been complaining about the load shedding problem since ages, and gradually, small medium businesses are shutting down. However, the present political instability has further compounded their problem. They cannot prepare shipments or meet export orders on time and so are losing their standing in the international market and the trust they’ve built over years. The textile business of Pakistan is presently suffering a loss of about $30 million daily, and the reasons are mainly two – the power crisis and political instability.

Is anybody listening to their cries?

Will the common man be affected by all this? Absolutely. His miseries are being compounded due to political instability. Whatever little he could feed his family is now also under threat. And while all of this happens, you continue to give speeches about how your government in particular is the emblem of economic progress.

Maybe it is time to rethink your political game plan, Sir, and focus on how heavily it is costing an already overburdened economy.