Comic history: There’s a hero in all of us 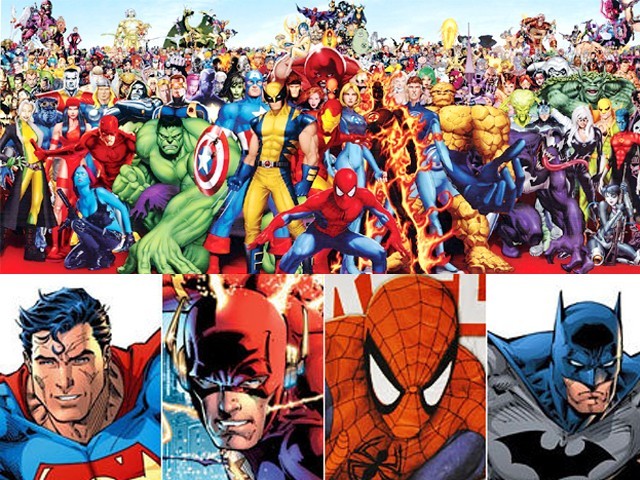 With all the turmoil around the world, superheroes provide us with an escape, and show us that all it takes is courage and the right mind-set.

Since the advent of literary print there is one word that comes to mind whenever you hear of comics: superheroes. Superhero comics burst onto the scene with the introduction of Superman, Batman and Wonder Woman in the late 1930s.

Superman represented the hero we all wanted to be: someone who had the power to move planets, and yet, chose to do good for the world and its people. Batman portrayed the humanistic flaws; how our tragedies and mistakes could be used as motivation to become a hero. And Wonder Woman, who was a symbol for feminism and political hierarchy. These formed the trifecta of DC comics, along with Marvel, and they were and are still today, the titans of the comic-book industry.

All three of these heroes came forth in a time of adversity: Great Depression and the beginning of the World War, and inspired many heroes to come into the fray in the pages of paperback comics that were sold for around a dime at the time. From this wide array of heroes one remained synonymous with the free world.

At this time came a hero most people couldn’t relate to but the Americans, Captain Steve Rogers, better known to most people as Captain America. He was a source of hope and relief, if nothing else. At the time of the war, all of these heroes battled fascist and Japanese forces in their comics, sometimes going over the top, sometimes even being racist. This was certainly a tough time for the superhero comics, but the worst was yet to come.

In the 1950s, a book called Seduction of the Innocent started a movement which led to the formation of the Comics Code Authority. Themes of gore, violence, sexuality and crime were dulled down; anything unacceptable or inappropriate was censored. This was a big hit to the comic industry. The 50s was an age of campy humour, childish themes and panels filled with ‘Boom!’, ‘Pow!’ and ‘Kaboom!’. The industry was reduced to publishing westerns and teen magazines.

Then, in the 1960s, came Marvel comics. In a time where the world was witnessing the space race and the US civil rights movement, Marvel comics showed us that:

Heroes, like the Hulk, Spiderman and the Fantastic Four, acquired powers from scientific or cosmic mishaps, which seemed to set the theme of the atomic-age. But the thing that really differentiated them from DC comics was that all of them had real life problems. For example, Spiderman, the first teenage superhero, and the Black Panther, the first African American superhero, had other problems to tackle besides threats from super-villains.

The swinging 70s brought with it a whole new dimension to the comic book world. Artists started using expressionism, psychedelic art, funky colours and modern interactive techniques to make comic books more relevant. The two most iconic moments in this era perhaps changed comics forever. First, the death of Gwen Stacy, long time love interest of Spiderman, which reflected the theme of realism for Marvel comics. The other was the revamping of the Comics Code Authority, after a controversial issue published by Marvel comics which had an anti-drug message.

This was followed by the dark age of comics. And dark did not mean bad times, but a new ‘grim and gritty’ style of comics. Frank Miller revitalised Batman; a hero who had become childish and immature because of the strict laws of the Comics Code Authority and the 1966 Batman TV show. The Dark Knight returned to his terrifying nocturnal roots in the Frank Miller sensation: The Dark knight Returns. To this day, Batman bares resemblance to the one envisioned by Miller.

But the comic that created most sensation in the 80s was The X-Men, a young group of freaks with innate abilities known as mutants, different from other heroes who weren’t born with powers. They became representative of all those who have been ostracised by society (especially homosexuals); anyone who was different from the majority or not in line with the norms could find a place for themselves among The X-Men. Soon it became the most sold title at the time.

Modern age comics have now widened their horizons, where at one point in time comics just represented Americans and Caucasians, in the comics of today all ethnicities and nationalities have become part of the giant roster of superheroes. For example, the new Green Lantern in which Simon Baz is an African American Muslim, or the new Miss Marvel where Kamala Khan is a Pakistani super hero living in Jersey.

Reading comics is a hobby every third person has had at one point in their lives, and although advances in technology have greatly affected the printed versions of the comics, the characters along with their stories have just jumped into a new medium.

Web comics, animation, movies and video games are the future of the industry; an industry which, as we have seen in times of turmoil, seems to have the greatest effect. With the war on terror raging throughout the modern world, superheroes seem to provide us with an escape and show us that all it takes to handle problems is courage and the right mind-set. They have shown us that there is a hero in all of us. And by this, they have unknowingly become our generation’s symbols of hope, truth and justice.

Working as a management trainee at Bisconni. Comic book enthusiast and a house music fanatic. A Liberal and an aspiring politician, is spiritual not religious. He tweets as @mohammadshah107 (twitter.com/MohammadShah107)