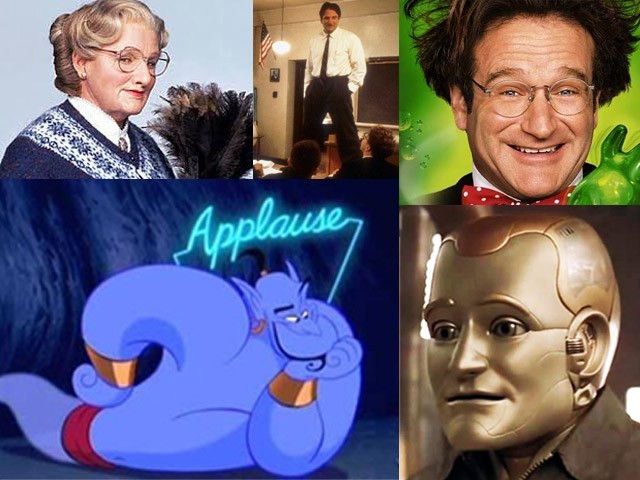 Legendary actors like Robin do so much in a single lifetime that it is hard to document in a single post, and even harder to see and cherish all of their work.

“You’re only given a little spark of madness. You mustn’t lose it” – Robin Williams

There is something to be said about talent, when it goes beyond distance, time and borders; when it is so powerful that it gives you goose bumps and makes your tummy hurt because you have laughed too hard.

For those of us who were fortunate enough to grow up watching up his movies, the death of Robin Williams has been the death of so many characters very close to our hearts.

Such was his magic and his madness!

“I love kids, but they are a tough audience.”

I don’t think he knew the magnanimity of his performances and how many children smiled because of him and with him. After a tragic start to the day, my friend, Israa, and I had a chat about our favourite Williams’ moments.

To start with, I proudly declared that my most favourite movie of his is Jumanji. When I think of Williams, the first thing that comes to my mind is his performance as Alan Parrish in Jumanji. He plays a man who was stuck inside a board game when he was a young boy and is then freed 26 years later. My heart sank in that moment when Alan returns and runs around his home excitedly, still like a child at heart, and screams:

His voice echoes throughout the mansion of a house but his parents are long gone. Williams is a hero in this film, he gives us hope that despite a series of unfortunate events, despite being away for so long, you do eventually come back home and, at the end of the day, everything works out.

My second favourite definitely had to be Mrs Doubtfire. Even when playing a woman, Williams did not fail to bring us to our knees with laughter. He warmed our hearts when he was an incredibly sweet man who disguises himself as an elderly housekeeper just so that he could see his kids more often. I choked on my food laughing when I saw him, Mrs Doubtfire, dance around and I was on the floor when he put his face in a cake to keep his identity hidden. ‘Awww’ was not a strong enough expression to describe the incredibly loveable Mrs Doubtfire.

To add to my list Isra told me about one classic that I haven’t yet seen:

“Since this movie came out before I was born, I came across it very late. But, like other Williams’ movie, it left a long lasting mark on me. He is not only an inspirational character who helps students discover their true self, but also someone who makes you smile at moments when you least expect it. I was left wishing I had a teacher like him.”

I think it goes without saying that everybody loved Genie; Robin’s role in Aladdin.

Who can forget our dear old, crazy Genie?

One of the most loved characters of all Disney movies, Genie was truly magical. He was mad, hysterical, bipolar and completely insane, yet; we loved him to the core. Williams did not only give his voice to Genie, he gave the big blue cartoon-character life and a spark only he could manage. The thing that breaks my heart the most is when I think that Genie is no longer in this world. Perhaps, he is now ‘free’ as he always wanted to be. He was certainly right when he said:

Genie will always be remembered.

Legendary actors like Robin do so much in a single lifetime that it is hard to document in a single post, and it is even harder to see all of their work. Jack, as suggested by Isra, is another movie I have yet to see. Yet, she swears it is as ‘moving’:

“Williams played a ten-year-old in this movie, and his depiction was spectacular. This was and has been one of my favourite movies of all time. Yet, I haven’t come across many people who have seen it. I recommend all Robin Williams fan to commemorate his life and watch this masterpiece.”

Flubber is another Williams’ masterpiece. As a nutty professor, Philip Brainard, with wild experiments and wilder hair, Williams was as funny and adorable as ever. He talked to himself and treated his robots like family. I cried so much when he cries at the death of his robot, Weebo, and I felt the surge of vengeance he felt as he plotted to bring those down who hurt his family. Definitely one of his cutest performances, only Williams could make you fall in love with talking machines and a green rubber-like bouncy substance, called Flubber.

I feel Robin Williams’ brilliance shined through his role in Patch Adams as well; nobody can watch this movie and not feel a huge lump of emotion in their throats. A medical student decides that a doctor’s job is not just to delay death, but to improve the quality of life. Based on a true story, Williams plays Dr Hunter ‘Patch’ Adams who does not want to believe that doctors can’t be friends with their patients. He puts on silly masks and costumes just to make his patients laugh. The hospital and his school warn him against it, but for him, the most important thing is the happiness of the patients and he wants to prove that laughter truly is the best medicine. Just the trailer itself will make you fall in love with Williams, if you aren’t already.

The Fisher King is another movie Isra wanted me to add to the list. She said,

“Williams played a crazy, delusional homeless in this one. He was an absolute entertainer, with his manic comedy coupled with heart-breaking, tragic outbursts. It was no surprise when he won the Golden Globe for Best Actor in a Comic Role for this performance.”

This is her favourite scene:

“Not many know that, aside from being an extraordinary actor, Williams was also a gifted stand-up comedian.”

These are just a few of the hilarious moments of his stage performances:

In the end I agree with how Isra summed it up:

“I feel there was something heart-warming about Robin Williams. No matter what he played, a robot or US president or a nanny or even a lover, his characters seemed to make one melt. He’d leave a piece of himself with you. You wanted to get into the screen and hug him for his motivation, cry with him when he got upset, laugh and dance with him when he was happy. The news of his death leaves us heartbroken. But, what he has left behind is a gift in itself for all his fans. We can share these moments with him till the end of time. And for that and so much more, we will always be grateful to him.”