Pakistan – In search of the missing patriot 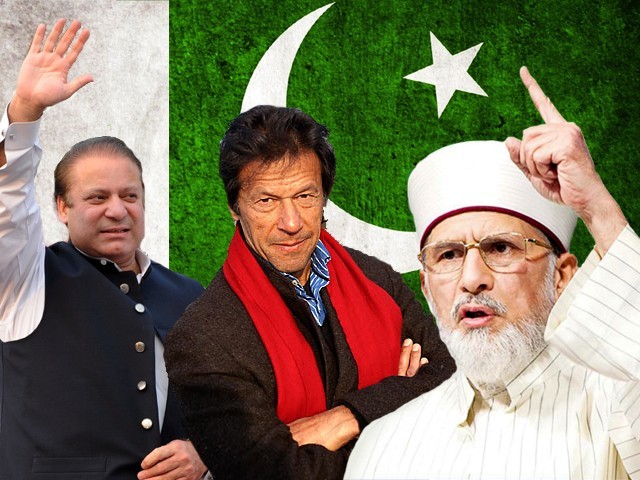 They all claim to be patriots and beacons of democratic vision. They are all anything but.

In the latest political upheaval to rock the country, all those involved may appear to be at complete odds but retain one salient feature that unites them all. The government, by the virtue of their status, espouse patriotism which is reflected in an unflinching dedication to democracy on the part of the Sharif brothers; the opposition under the tutelage of Imran Khan continues its elongated quest to reform the electoral process through a long march to the capital under the camouflage of patriotism; and the Canadian chameleon Tahirul Qadri (TuQ) invokes patriotism in his fiery rhetoric to establish the true force of democracy in Pakistan.

They all claim to be patriots and beacons of democratic vision.

They are all anything but.

It is difficult to ascertain whether it is insecurity or ineptitude that has caused the PML-N hierarchy into bringing large swathes of Punjab to standstill with roads blocked with containers, restrictions on petrol distribution, heightened police presence and a general inability to understand a basic tenet of a democracy – the right to freedom of expression and speech. A sombre occasion in Lahore (Youm-e-Shuhada) and a politically charged concert (Azadi march) in Islamabad posed no real threat to a government that enjoys what it loves to remind us as ‘the mandate of the people’. This level of paranoia is surely not the way of the ‘lion’. PML-N has shed its coat and under the façade appears to be a scared little cat rather than a roaring beast.

Giving his Aitchison College moto, ‘perseverance commands success’, a whole new meaning is the soon to be ratified by Guinness book of world records, Imran Khan for inducing the longest natural disaster ever recorded. Whilst the only tumultuous event the PTI tsunami has caused thus far is the captain’s untimely slip, there appear no plans to rebrand the tsunami into a regular monsoon shower. With the Pakistan Army currently embroiled in a war in North Waziristan, Imran can no longer tolerate the injustice of May 2013’s rigged elections. His patience wears thin as does his sense of timing and occasion. This champion of democracy now resorts to a revolution instead of presenting an elections reform bill in parliament. His supporters claim he has been following procedure for the last year or so, yet in the very next breath point out that there’s no point bringing about a reform bill as it will never get implemented like the magnetic ink scandal; so much for procedure and democratic principles. A congregation of a million people in the open during a time of war doesn’t come across as the smartest or most patriotic move.

Finally, the self-proclaimed harbinger of democratic rule, a man vested with the burden of a grand total of zero seats in the parliament and a man who isn’t prepared to revoke his Canadian citizenship, will join hands with Imran in an attempt to forcibly remove the government – democratic principles be damned. Our esteemed Tahirul Qadri may not have the mandate of the people but has made sure his adherents are equipped with gas masks, bullet proof vests, laathis and even tear gas. How they acquired this equipment on such short notice is alarming. Exactly what sort of democratic principles can a person whose hypocrisy (vis-à-vis blasphemy laws) bring?

This brand of patriotism isn’t interested in democracy, logic or reasoning; it is interested in free airtime to quench its thirst for attention. Qadri wants a revolution and has ordained that all those joining his march to the capital will receive the same blessings as those bestowed upon the pious during Lailat al-Qadr – if that isn’t blasphemy, what is? Last time this neck of the woods went down the revolution route, 1857 happened.

Together, the three stooges inadvertently conspire to put on an unprecedented show of lunacy to turn the most patriotic of days into a farce. Perhaps they realise that Pakistan’s independence only really took place on August 15, 1947 and not on August 14 as we are led to believe. The Pakistani trait to not let facts come in the way of a good story as Hamid Mir demonstrated by declaring the 2013 elections as the most blatantly rigged elections in Pakistan’s history. Apparently, the bullet that lodged in his abdomen conveniently erased Mir’s memory of how the aftermath of the country’s first elections culminated in the loss of East Pakistan. It also erased the memory of Ziaul Haq and Pervez Musharraf’s comedic referendums.

As Pakistan approaches its 68th year of existence, cajoling 200 million in its motherly embrace, it continues to search for its missing patriot.

A University of Toronto Graduate in Economics, Political Science and Near and Middle Eastern Civilizations. He tweets @talhaz (twitter.com/talhaz)

The Burka Avenger: Offended by a fictional superhero's clothes

Bhoja Air crash: We are accessories to murder