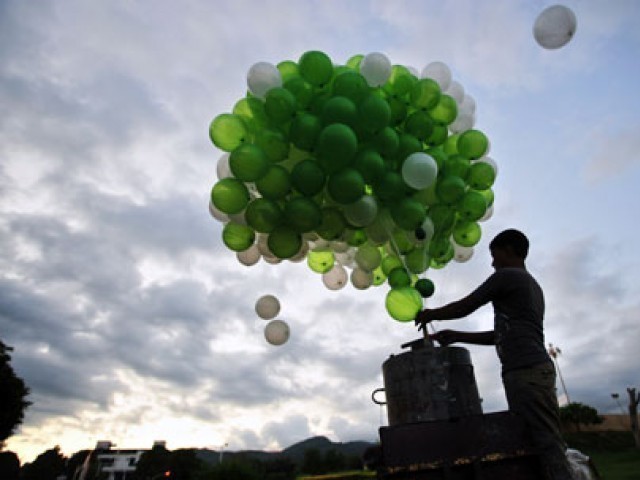 The Karachites love their food and are all too eager to show you all the different types of food in the city, not taking ‘no, sorry I’m full!’ for an answer. PHOTO: FILE

My friends and family were concerned about my health when I told them that I would be fasting during Ramazan, but my Pakistani friends all assured me that I would go back home “fatter than ever”.

The tables are set up and the feast includes biryani, samosas, pakoras, jalebi, gulab jamun, naan, paratha, daal, chicken, yoghurt, dates and much more. It is a spread fit for a king and we all stand around looking at the food, then our watches, waiting for the clock to tick over to iftar time with our mouths salivating. The call to prayer is heard and the rumbled stomachs cease as everyone begins to break into the mountain of food before us.

The food tantalises your taste buds, teasing you with flavours either spicy or sweet and not much in between the two extremes. And then within 25 minutes the food is gone. Eventually your belly is so full and swollen that you have to sit down and give it some time to digest. You soon forget about fasting for the day as you fall into a mini ‘food coma’. But before you can really fade away, the next course is served.

At first, I thought the iftar was all inclusive. It was entrée, dinner and desert all in one. But over the next few weeks, I was to learn that this was not the case. Iftar is merely the beginning of a long night of eating, drinking and more eating.

The night begins with iftar then moves onto dinner, where the spread is just as impressive, with more food than I could ever dream of eating. Then of course after eating dinner you need something sweet, then it’s time for tea, more ‘snacks’, some more tea to ‘help you digest it’ and then something sweet to clear the palette. It is a seemingly never ending cycle. It is like a true binge eating atmosphere once the fast is broken. You feel like you have to try everything on the table that you had been deprived of that day.

Karachites love their food and are all too eager to show you all the different types of food in the city, not taking ‘no, sorry I’m full’ for an answer. During the night, we are whisked away from one restaurant to the next, each place famous for a particular speciality dish that we ‘simply have to try’.

And as I finally lay my head to rest at the end of a long filling night of different tastes and textures, my alarm sounds for sehri time.

Never send a girl to do a man’s job

On a separate note, we had another addition to the intern house, one that was perhaps a little more foreign than the rest of us and received a rather unwelcoming welcome – a lizard. It (who was never named) claimed the kitchen of the apartment and had successfully set up his living space in the corner cupboard. His mere presence is enough to scare the tenants of the apartment. This little creature caused screams from each of the girls in the apartment as each took turns to face the ‘beast’ to claim back our kitchen cupboard. Each, however, was unsuccessful. In desperation, we called upon the help of a fellow AEISEC-er, Hussain, who assessed the situation and then called upon the help of another to get rid of the beast.

We, girls, were all gathered in the lounge and soon regretted our desires to witness the evacuation. Cupboards were slammed, shoes were thrown and after a 10 minutes struggle, the noise ceased. There was a motionless black lizard lying on the ground and a room full of seven horrified girls. With the event fresh in our minds as we left the apartment that afternoon, Tatiana asked,

“Wasn’t the creature in the cupboard green?”

Music is the language of the soul

There seemed to be something missing from my everyday life and I couldn’t put my finger on it. That is until I stepped into T2F café. It was dimly lit with people sitting cross legged on the floor tapping their fingers and swinging to the captivating music that filled the room as if they were in a trance.

The sweet sounds filled my ears, something that I had missed. It has the ability to transport you into another world, a mesmerising and enchanting world where music speaks to you in a universal language, filling you with hope, love and pleasure.

Twelve men, a tabla and a box accordion are all it takes to create such an entrancing experience. Three men singing with passion and conviction in the front whilst the others sit behind them playing the minimal instruments and clapping their hands to an entirely different beat of their own. The audience is captivated, yet do not dance. Some close their eyes and allow the music to soothe them whilst others gaze on in a meditated manner. Occasionally people rise from their seats, approach the front and will greet the lead singers with some money tucked in their hand, whisper something in their ear and place the money in front of them.

This experience was shared. It was something that spoke to people of all ages and nationalities. It brings smiles, creates unity and a sense of community. 300 rupees spent well!

A young International Relations, Sociology and Anthropology student in Australia who has a love passion for travel, having visited over 30 different countries. She was recently working with the War Against Rape organisation in Karachi and is now traveling the northern areas of Pakistan. She blogs at wornoutsoles.blogspot.com