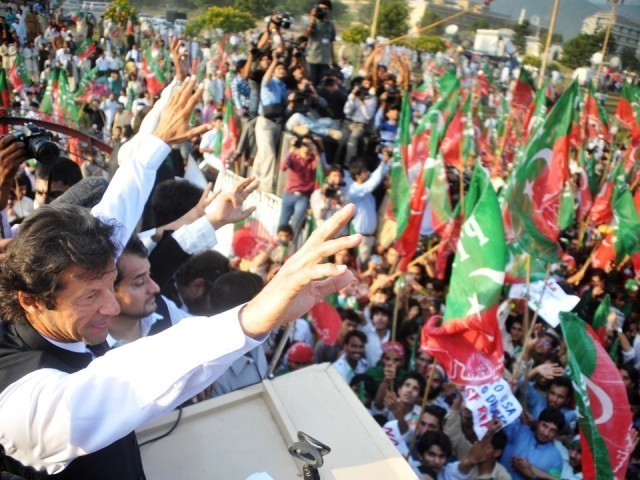 While many legitimate questions can be raised on PTI’s intricacies, there have been some unfounded criticisms on its long march, which one does not have to be a ‘PTI jiyala’ to notice. PHOTO: QASIM USMAN

For a good part of our history, we have treated the army as a sacred cow; a holy entity entrusted with the protection of all, going against which would allow our enemy to overtake us. Hence the whole nation has kept quiet on whatever the army did under the ‘doctrine of necessity’.

Now, it seems, the position of that sacred cow has been taken by our dear democracy. Murders have been veiled, corruption allowed and fundamental rights of the people have been suspended, all in the name of democracy. And whenever a voice rises against this tyranny, it is suppressed under the good old phrase of ‘jhamooriat ko khatra’ (danger to democracy).

Pakistan Tehreek-e-Insaaf (PTI) is set to hit Islamabad on August 14 because it believes the 2013 elections were rigged and the current government is a sham democracy. While many legitimate questions can be raised on PTI’s intricacies, there have been some unfounded criticisms on its long march, which one does not have to be a ‘PTI jiyala’ to notice.

Here are a few of those criticisms and their correct responses:

Firstly, it is hard to understand how the ‘10 to 15’ figure is so vehemently circulating in the social media. As of now, rigging has been proved in 14 constituencies of provincial and national assemblies. But is it really about the numbers? Should it be about the numbers?

Legitimacy of the polls is questionable even if one vote was rigged. It is a fundamental, constitutional right of every citizen to elect his/her representative and theft of that right must be protested against. Democracies thrive on principles, not by compromising on principles.

2. “While the North Waziristan operation is going on, PTI must stand with the administration”

Although PTI had been building up the momentum for the long march through its rallies, it called off its Bahawalpur jalsa and the announcement of the long march after the operation initiated. It only revoked its decision after the Model Town incident happened in June, which took 14 lives. So if anybody is to be blamed for not adjusting to the situation, it’s the Pakistan Muslim League-Nawaz (PML-N) government whose aggression in Model Town triggered the current political turmoil.

3. “Imran Khan just wants to become the prime minister, hence all the fuss”

PTI knows that it did not possess the grass root level of support or the infrastructure to win the 2013 elections. Its internal report also identifies its own shortcomings as a major reason for its defeat. PTI would obviously prefer more time to increase its support-base. Also, the longer the PML-N’s tenure the stronger the incumbency factor against it is likely to be. Hence, in the case of mid-term polls, PTI would be the biggest loser.

While Dr Tahirul Qadri has been openly ordering his followers to deal with the policemen with force, PTI has so far maintained that it will demonstrate peacefully. Imran Khan, however, has asked the policemen and civil servants to not act unlawfully and statements like these are quintessential of any anti-government movement.

Nawaz Sharif himself, during his movement in 2009, asked the police to refuse to accept orders from the government. At one rally in Gujranwala, a policeman presented his cap and belt to Nawaz and was garlanded on the stage by PML-N leadership.

5. “PTI should call off the long march as it can result in imposition of martial law”

In any case, boys with barrels do not need PTI to take charge. They never did.

The government had 14 months to deal with the impending political crisis it is facing today. A thorough audit of the ‘famous four’ constituencies could have averted the prevailing situation. Instead, the government went by its delaying tactics, hiding behind stay orders, procedural inefficiencies and institutional red tapes. Now, although it would be great to celebrate another independence day with the same old fervour of national unity, but as a matter of principle, criticising PTI’s long march is just not right.

A political science student at Lahore University of Management Sciences(LUMS) who likes to write on local Politics and International Affairs.