Younus Khan: Rekindling the charm cricket once had 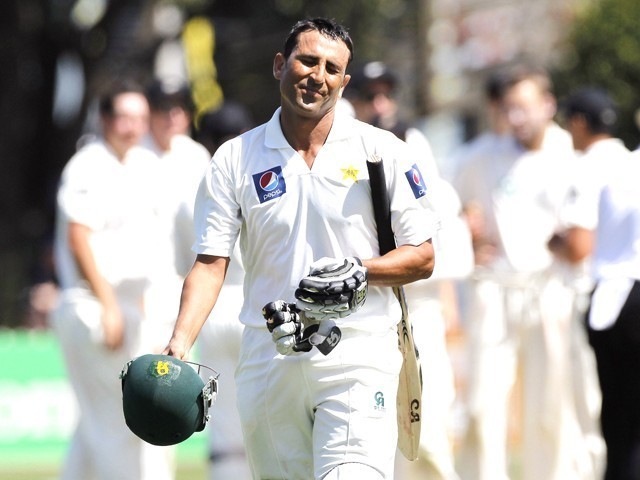 To have batsmen like Younus and Jayawardene in a match give you satisfaction that cricket of old times has revived in today's fast environment. PHOTO: FILE

Fans of Pakistani cricket were not able to watch their team playing at an international level, but enjoyed the same emotional feelings through other sports; at the biggest stages including FIFA World Cup and Wimbledon. Aged and youngsters recalled the emotions shared by Pakistani cricket players in the form of nail biting and enthralling performances, engulfing the feeling of joy, which is the main objective of sports.

Coming back to cricket, however, the expectations were high because it was a test for cricket to prove that it does not lag behind the world’s leading sports, where excitement, skill and competition matter the most. Despite the fame of unpredictability, the underrated player, Younus Khan, once again proved his worth – he stepped-up his rating and kept the fans faith in the game steady; his tedious innings were full of thrill, joy and pure delectation.

Younus is a peerless blend of talent, skill, stamina and experience; the ingredient of a top-class player. And against Sri Lanka, all these components played an active role in the taste of his innings. Batting at number three requires circumspect, switching between defence and attack. And for a team whose openers depart quickly, number three plays an anchoring roll; which Younus seemed to know very well. He is now the second highest away runner, after Sachin Tendulkar, as he managed to score his 24th century in Sri Lanka.

Younus’s career has gone through many off-the-field interruptions, including fights with the chairman that kept him away from action for more than a year and some out of form periods that hurt his reputation as the leading Test batsman. Another paradigm was the recent injustice done to him when, normally, listed as an A-category player, Younus, was demoted to B-category. Only five players were at the top, including captains of both formats: experienced Shahid Afridi along with, the world’s number one One-Day International (ODI) player, Saeed Ajmal. Despite being the most technical and elegant batsman of 21st century, and especially after the retirement of great players, like Jacques Kallis, Rahul Dravid and Tendulkar, Younus Khan’s presence in top category was definitely missed. Only Younus Khan and Shivnarine Chanderpaul, of West Indies, are the ones fans relish to watch.

Some serious feedback from fans, former and present cricketers, and Younus himself, was given to this announcement and Pakistan Cricket Board (PCB) had to eventually change their decision. Younus proved his worth in the first match played and is the only player in the current line-up of high standard in technique, is resilient and is even the fittest amongst them all.

Pakistan’s fast bowling attack is relatively young, as compared to batting line up of the mighty Lankans, but this time we have Waqar Younus as the head coach. His experience, both as super star fast bowler and a successful coach, will help give Junaid Khan and Mohammad Talha the confidence needed to go through the opposing line-up.

The series is going to be a memorable one for Lankans. Are they going to win? It is the last series of their most famed and respected star batsman, Mahela Jayawardene; the batsman who anchored the Lankan ship after the retirement of previous greats. But will he be able to perform the same in his last series? So far it looks like he will leave no stone unturned to put a memorable end to his majestic career. When you have batsmen like Younus and Jayawardene in the same match, you get the same sense of satisfaction you would get when you used to watch cricket back in the day – in the glory days.