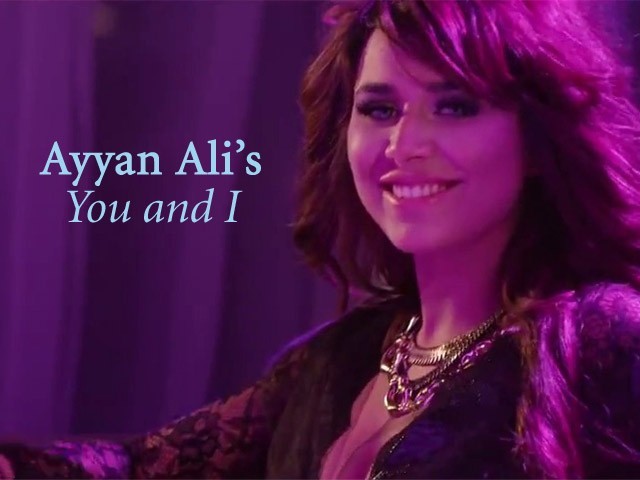 At least Ayyan tried to do something different. She might not be a Beyoncé yet, but she is also not the Taher Shah of this country.

The ever famous model-turned-singer, Ayyan Ali, released her debut single ‘You and I’ featuring Charm a few days ago. Since then, the 21-year-old supermodel has had to face severe criticism with regard to the music video and her singing abilities (or lack thereof).

In my humble opinion, whatever the quality of the song may be, I applaud the young model for doing something she believed in – despite knowing the kind of backlash received by her counterparts earlier. I came across the music video the day it was released, and honestly speaking, I didn’t think it was all that bad. It was, in my opinion, very well directed and produced; Ayyan was given the spotlight and she definitely did it justice. Although the video did have a strong ‘Western’ element, it was shot beautifully.

It starts off portraying Ayyan as femme fatale and a little later goes on to introduce Charm, as he raps alongside our exquisitely dressed model.

Although some critics believe her voice was auto-tuned, this very trend has become quite common in the music industry. Take, for example, Rebecca Black and Britney Spears, both are infamous for using auto-tune in their music. Yes, Ayyan’s singing may not have been top-notch, that is not to say I am criticising her ‘accent’, but the auto-tune was definitely over-the-top. The first few seconds of the song looked great, but the music failed to catch my attention – it did, however, pick up the pace during the second half of the song – enough for me to write this piece in its defence.

Although some of the harsh reviews from fans and music critics were expected, the degree of hate being spewed was not anticipated. Despite all her efforts and achievements, Ayyan was dropped like a hot potato straight into a ball of fire. What bothers me about this critical view, however, is that it is not that Ayyan, a model, made a debut as a singer, it is because Pakistan has refused to accept all the new celebrities trying their luck with music and singing. When Veena Malik released her music video titled ‘Drama Queen’ she was given flak for every little detail of the video. Yes, she may have a ‘vivid’ public image, but I do not remember that becoming the right of keyboard warriors to insult and demoralise her or her abilities. I may not have liked the song, but the fact that critics took to insulting instead of giving constructive criticism is what struck the wrong chord for me.

Coming out of your comfort zone takes time, effort and lots of guts. Sitting behind a pseudonym and computer screen, on the other hand, doesn’t. Yes, criticise, but don’t dispirit. Everyone can learn from their mistakes, and Pakistan is very active at pointing out the mistakes, but no one thinks to provide advice instead, encouragement or constructive criticism. How will things ever prosper if we keep shooting any and every effort down?

In another instance, Ayesha Omar, who is acclaimed for her acting skills, was given the shorter end of the stick when she started singing as well. A number of critics were appreciative of her singing talents but as per usual, there were others who had no qualms blurting out their ‘reservations’ as well.

In this case, however, you will notice that due to the relatively timid reputation of the actress, the comments were not as negative as those for Veena Malik or Ayyan’s music video. In Mathira’s case, however, sh*t hit the roof. This celebrity was brave enough to release two singles: ‘Jadugar’ and ‘Jhoota’ but both the songs were bashed to the moon and back. In certain cases, like the video of ‘Jhoota’ many criticised the fact that it featured a boy who was much too young to have taken part in the video of its kind and that I agree with, but again, the misplaced criticism was directed towards her only and not the parents of the boy.

When I asked around about the thoughts of certain individuals with regards to Ayyan’s music video ‘You and I’, the feedback I got from Warsi Nisar, an undergraduate student from Karachi, was,

“The music video was absolutely filthy! The singing was terrible. Thumbs down!”

While Dania Qadir, a high school student from Islamabad said,

“I liked the music video but her singing wasn’t the best.”

Although I agree with their comments about Ayyan’s singing, there are other admirable features that came along with the whole package, such as the direction, production and top-notch wardrobes that were ignored completely.

When I asked Javed Khan, an undergraduate student from Lahore, about Ayyan’s singing and the music video, he said,

“She’s a good model. I was quite impressed with her acting in the music video. Overall, I appreciate her effort.”

On the whole though, if you were to take a look at any social media site, news site or entertainment site, featuring her song, the amount of hate being spewed is shocking. It takes a lot out of a person to be able to do what they desire. It is a risk; you can fly or fall flat on your face, some people have the guts to take that leap, don’t criticise them for trying.

Despite their restrictions, women in Pakistan are now seen making an effort to come out and express themselves. It is okay to criticise, but there is a fine line between constructive criticism and a disrespectful taunt, and as responsible individuals with our values set in the right place, we should make sure not to cross that line at any cost. Perhaps it is time for us, Pakistanis, to take a hint from all those brave people out there living their dreams and start living ours instead of psychoanalysing theirs. It takes a lot out of us to compliment someone else’s effort – maybe that is where we should start making the difference.

Ayyan might not be Beyoncé yet, but Pakistan is definitely not a timid ray of sunshine either.