Hercules: Out with the demigods and in with the mortals 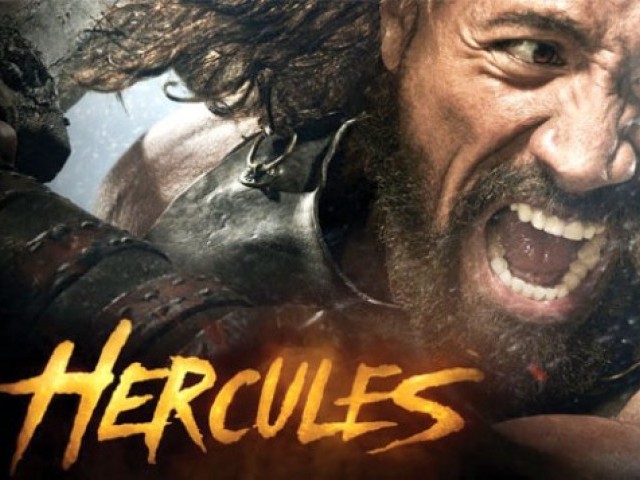 Dwayne ‘The Rock’ Johnson is seen cladded in leather attire while swinging his swords and clubs at his enemies with Greek conviction. PHOTO: FILE

Director Brett Ratner, who has previously directed the Rush Hour trilogy, X-Men: The Last Stand, and Horrible Bosses, brings Hercules, an action-packed movie with Greek muscles written all over it.

Pumping the action in the lead role is former World Wrestling Entertainment (WWE) superstar, Dwayne ‘The Rock’ Johnson, who is seen clad in leather attire while swinging his swords and clubs at his enemies with Greek conviction. Unlike the Greek mythology, where Hercules is the son of Zeus, the movie doesn’t bode that connection as this time the story is somewhat different. Hercules (Dwayne Johnson) is the leader of the mercenaries and although he is regarded as the demigod son of Zeus, the story portrays him as a human. Nevertheless, it did not bother Hercules for he has acquired training to take down beasts twice his size. Moreover, the story narrates the reason why Hercules became mortal. To know this, the viewers must watch the movie. The story is quite straightforward, where Hercules is asked by Lord Cotys of Thrace (John Hurt) to provide his army with ample training to defend the Thracian Kingdom against Rheseus (Tobias Santelmann). Those following Hercules in his band of mercenary are Amphiaraus (Ian McShane), Autolycus (Rufus Sewell), Tydeus (Aksel Hennie), Atalanta (Ingrid Bolso Berdal) and  Iolaus (Reece Ritchie). All are experts in particular domains of warfare. Iolaus, however, is Hercules’ nephew and the one who narrates the story.

To keep the story simple, the narrative explains that Hercules did complete the Twelve Labours, a feat that made him a legend. However, the story doesn’t dwell on these achievements. Only glimpses of his success were shown in the opening scenes of the movie, which set the pace with special effects of battle scenes shot to suit Herculean might. Though the movie is set in Greek times, one can relate the story to on-going modern day conflicts among countries and in particular regions, as Lord Cotys is aggressively pursuing to expand his kingdom while Hercules and his men are preventing him from doing so.

It was Lord Cotys’ daughter, Ergenia (Rebecca Ferguson), who delivered his father’s message to Hercules. He did have a brief moment of romance with Ergenia, however, it was a decent attempt not to prolong the affair because the movie is about muscles, fights and an adrenaline rush that shows why Johnson is a rising action star.

In the previous versions of Hercules, it was portrayed that in time of need, Hercules would call upon his father, Zeus, for help. The ruler of Mount Olympus would send his soldiers or would change the weather to beat the enemy to save Hercules. However, in this version, since the demigod son is human, he must therefore complete all the tasks on his own. This, however, adds spice to the story, as the viewer’s know that Hercules will be in action this time and not Zeus. Johnson began preparing for the role months before the shooting began. Although he was always in top shape because of his wrestling career and later turned into an action star, he needed to go an extra mile to turn himself into Hercules. According to Johnson, he trained himself in Budapest where he would begin his workouts at three in the morning. For nearly eight months, he followed a schedule of working out for hours in the gym, consuming a strong three course diet and shooting for the film that could go on for 12 hours. Ratner’s professional graph will take a giant leap for he has never done a movie based on a Greek character and his past projects belonged to the genre of fantasy, science fiction, comedy or drama. After directing X-Men: The Last Stand (2005), which wasn’t as big a success as the other movies of the X-Men franchise, Ratner was in pursuit of a movie that could establish his directorial skills, and Hercules certainly is his best work yet. It has catapulted both Ratner and Johnson’s careers to new heights.

With a story as big as Hercules’, the running time of the movie is 98 minutes. Ratner and producers, Barry Levine and Beau Flynn have done a good job summing up the story with breath-taking action sequences within a time span of 100 minutes. The 3D effects bring action to life as Hercules’ weapons and his battles become prominent along with the special effects that are just what the viewers want to see.

Even though the film has action and a smooth story, it seems as if the sword wielding scenes were honed down for some reason. The movie is adapted from the graphic novel of the same name and those who have read the novel must be wondering why similar graphic content wasn’t shown in its scenes. Being an avid fan of Johnson, this is perhaps my only criticism. Besides that, the movie is a good watch that would appeal more to male viewers for its testosterone-fuelled fights.