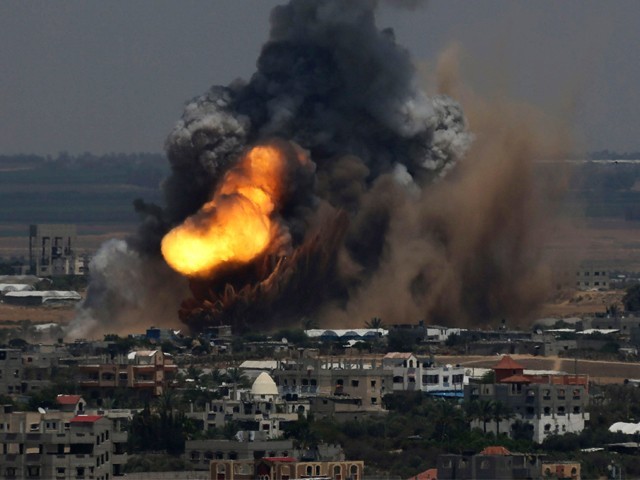 Smoke and flames follow an Israeli airstrike in the Gaza Strip on July 8, 2014. PHOTO: REUTERS

Bring up Gaza in a mixed setting and you will hear a myriad of passionate responses. It is a complex and sensitive issue with a troubled history. One thing is for certain though that it is difficult to talk about it without saying a prayer for the innocents caught up in the violence and those that have passed away.

The Gaza conflict has been allowed to go on for far too long, fuelled in fact by delusion from both sides and the refusal to accept facts instead of heated emotions and false rhetoric.

Israel accuses Hamas of indiscriminately launching rocket attacks that has put their civilian population at risk. That is the excuse it has used to justify this current military action, riding on public support gained through the alleged manufacturing of the teenage kidnapping saga, which was blamed on Hamas without any evidence whatsoever. It has been revealed that the Israeli government knew early on that the teenagers had been killed but prolonged the deception, including gagging the press from reporting the truth, in order to foster a hostile environment that would create favourable conditions for them to re-arrest the released Palestinian prisoners without charge during the charade of an investigation, and launch an incursion into Gaza.

And now, with over a thousand innocent civilian casualties, most of them being women and children, the world, including many of Israel’s allies, is waking up to the fact that nothing can justify this heavy handed offensive. This aggression needs to be condemned in the strongest terms possible.

What can one say about Hamas?

With some leaders in exile and others safely tucked away in bunkers, it seems like the organisation has not a single care in the world while hundreds of their people die. It is fully aware that Israel has the Iron Dome defence that takes out almost all rockets that come its way. It boggles one’s mind when you think of the logic behind launching ineffectual attacks from densely populated civilian areas, knowing that it will invite a much larger reprisal from the Israeli side.

Considering all of the aforementioned factors, I have yet to come up with even a single positive that has been achieved by Hamas’s rocket fire. And apparently, neither does Palestinian President and leader of the rival Fatah party, Mahmoud Abbas, who said,

“What are you trying to achieve by sending rockets? We prefer to fight with wisdom and politics.”

The only thing that the rockets are doing is giving Israel an excuse to justify their violence when their representatives go on international sympathy tours, and their PR ploy seems to be working.

For example, Joan Rivers’ much publicised lambasting of pop starlet, Selena Gomez, when she had posted in support of Gaza.

In a similar incident, Hollywood actors Javier Bardem and Penelope Cruz signed an open letter condemning Israel’s actions in Gaza, which was later criticised by actor and Angelina Jolie’s father, Jon Voight, who dubbed the Spanish couple ‘ignorant’ and told them to ‘hang their heads in shame’.

Even Sean Hannity, a Fox News right winger, repeatedly brushed aside any notion of sympathy for the people of Gaza because, “3,000 rockets… fired into Israel”.

Supporters of Israel harp on about the fact that Hamas uses its people like human shields. But there has been absolutely no evidence to prove that Hamas physically surrounds itself with civilians for protection. A UN report did, however, discover that Israeli soldiers have beaten up Palestinian children and used them as shields.

There are, however, substantial incidents that point to the fact that Hamas has intentionally put its civilian population at risk. There are only a few places in Gaza where the civilians can go to in order to receive shelter from the fighting, one of them being UN Schools. Despite knowing the danger it would put the women and children in there, Hamas stored rockets in, not one but two, children’s school, earning a furious condemnation from the UN relief organisation, United Nations Relief and Works Agency (UNRWA). This also gives Israel and its sympathisers another excuse when it is called out for attacking civilian structures.

The reprehensible shelling of UN schools by Israel has pushed US, France and UK further to officially condemn Israel’s actions. In fact, Foreign Office minister, Baroness Warsi, resigned from her position in protest, saying its policy on the crisis in Gaza is “morally indefensible”. Both Israel and Hamas have been accused by the UN of being guilty of war crimes, and the guilty need to be held accountable.

There has been a lot of talk about the lack of support that Gaza has received from surrounding Arab countries, mainly because the leaders of most Arab countries abhor Hamas. It is aligned with Iran, which is the political nemesis of most political governments in the region. Through this alignment, Hamas is also associated with Hezbollah and Bashar al-Assad, who is responsible for the deaths of thousands of innocent Muslims, far more than have been attributed to Israel. In fact, many of the posts about Gaza are mistakenly, or manipulatively, using pictures of the dead from Syria.

The US finally took a stand and forced Israel to commit to a ceasefire and come to the negotiating table. Almost immediately, the ceasefire was broken when Hamas kidnapped an Israeli soldier, embarrassing Barack Obama, and prompting Israel’s Prime Minister Benjamin Netanyahu to rebuke him by saying never to second guess him again when it comes to Hamas.

The right wing hawks in the Israeli government have gone too far and have damaged their own country’s standing in the eyes of those that used to be staunch supporters previously.

Throughout all this, one thing is very clear. Knowing that Israel is the fourth strongest military in the world, one with a nuclear arsenal no less, Palestinian independence cannot be won on the battlefield. It needs to be won through the hearts and minds of the international community.

If one were to watch a government official give a speech on Gaza, it should be the one by Senator David Norris, a gay Christian man, who despite knowing what would happen to him in a Muslim country, launches an impassioned plea.

In the meanwhile, all we can do is pray.

Kenya mall attack, and how our leaders let us down in Peshawar