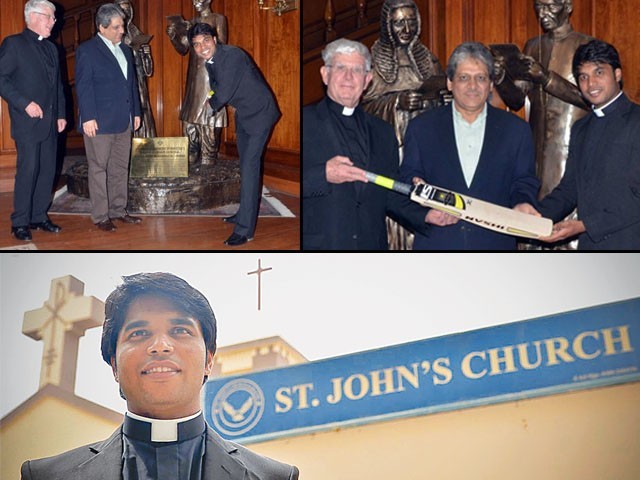 Bhatti is currently preparing himself to take orders as a Catholic priest in Rome and is part of the Vatican cricket club as a wicketkeeper.

Cricket fever in Pakistan is remarkable; in fact, the entire subcontinent is quite smitten by this sport. Cricket fans exist in every nook and corner of this region. In the past, we have seen how cricket has been used to create awareness, raise money for different causes and even be utilised to increase diplomatic ties. Because the game is so popular, cricket has helped in bridging many gaps and bringing different people closer together.

A recent example of this is the cricket series underway at the Iqbal stadium, Faisalabad, which is aimed at raising funds for the IDPs of North Waziristan. In this series, members of the national team will be participating in friendly matches against Faisalabad XI, the local cricket club.

Passion for the game is such that even though Faisalabad has undergone severe load shedding spells and people have trouble sleeping properly at night, these cricket matches are still received by an excited audience and loves to see their favourite players in action. Having been to the stadium myself, I was very happy to see the response these games attracted.

That’s the thing with cricket. It demands complete and utter support from its followers. That is why it can be used for other causes as well; people listen to the language of cricket.

Many of us might not be aware of this, but the Vatican church initiated its cricket club last year, named the St Peter’s Cricket Club (aka the Vatican XI), which hosts members from different parts of the world and has an international standing. The players in this club are all catholic priests who belong to different seminaries from Rome.

Recently, the Vatican selected a Pakistani Christian, Amir Bhatti, to play for their cricket team. I was really happy to see that someone belonging to the minority community in Pakistan was making a name for his country and that too in the Vatican church. Bhatti is currently preparing himself to take orders as a Catholic priest in Rome and is part of the Vatican cricket club as a wicketkeeper.

The club comprises eight players from India, two from Sri Lanka and one from Pakistan. The dominance of the subcontinent is evident in the club, which reiterates the fact that cricket fans will follow this sport religiously, no matter where they are.

Another piece of great news that followed this selection was that the Pakistani government has decided to support this young Pakistani priest in whatever way it can. The governor of Sindh, Dr Ishratul Ebad, presented a total of six Test cricket quality bats and a cheque to Father Robert McCulloch, who is a member of the Vatican club committee, in a ceremony held at the Governor House. This gesture was seen as a message of friendship for the Vatican, which is something the government really needs, in order to portray itself as a supporter of its minority population.

The governor has also offered to assist the new cricket club by sending in qualified Test cricketers to train and coach them. Alongside this, Ebad has offered to go to the Vatican in October and also wishes to have a tri-tournament cricket series by 2015, in which Governor of Sindh XI, Vatican XI and Archbishop of Canterbury XI will show the world their bond of friendship via sports.

This is another example of how cricket was able to make Pakistan standout in the international community and also help the government exhibit its much-needed support for minorities in the country.

You never know, steps such as these might just bring cricket matches back to the barren stadiums of Pakistan, and other countries might feel comfortable sending their players here to participate in our tournaments and play on Pakistani soil again. The Sindh government’s response needs to be appreciated. They showed the world that Pakistan has a tolerant and peaceful side as well – something we should all try and do.