Can a Muslim be buried next to a non-Muslim? 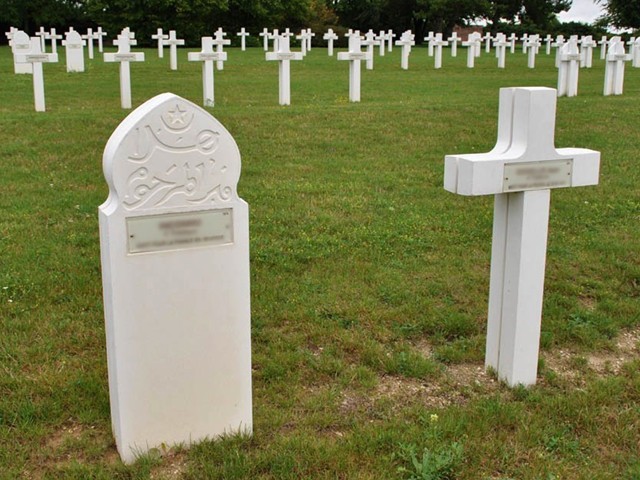 We decided to bury him in the ‘inter-faith’ section where deceased of all faiths are buried together. But we were not prepared for the agony that followed.

My father-in-law, Abdullah Khadim Husain or ‘Abbu’ as we called him, suddenly died of heart failure a couple of months ago while visiting one of his children in Virginia. Although he did have a history of heart disease, he was apparently in good health, which is why his demise came as a total shock.

Since most of his children now reside in the US, it was decided to bury him at the National Memorial Park in Falls Church, Virginia instead of taking the body back to Pakistan, and so the burial arrangements were made. The question, however, came up as to what section of the cemetery should be used as his grave site as there were designated sections for Muslims, Christians, Buddhists etcetera and an ‘inter-faith’ section where deceased of all faiths are buried. My mother-in-law chose the inter-faith section.

None of us were ready for the agony that this innocent decision was going to bring about.

A cleric from a local mosque was contracted to officiate the burial service and time was set for the burial. Family and friends gathered at the burial site for the service; everyone was still in a state of absolute sorrow and disbelief.

Minutes before the scheduled burial was about to commence, the designated cleric raised objection to the burial site and refused to conduct the service. A Muslim was being buried in a ‘non-Muslim’ grave site and according to him,

“Islamic Shariah dictated that Muslims cannot be buried with non-Muslims. If, for some reason, a Muslim was buried in a non-Muslim area, the body would have to be later exhumed and reburied in a Muslim burial ground.”

When he was informed that this ground was chosen by the wife of the deceased and all of her children stood by the decision, he objected that my mother-in-law did not qualify to make such a decision as she was not an ‘adult male’ next of kin to the deceased. Upon our insistence, he further explained that even though he appreciated the intention and spirit behind our decision, he was answerable to his institution and would rather not circumvent the rules that he was assigned to follow. He further added,

“You are free to carry on as you wish but I will not be a part of it.”

For the next few minutes, every one stood stunned. Grief slowly gave way to disbelief, anger and curiosity. Family members circled around, re-evaluating their judgment and unbelievingly expressed the uneasy questions.

If Muslims and non-Muslims can be neighbours in life, why can’t they be neighbours in death? Maybe the flaw was in the interpretation of the law or in the law itself, but doesn’t the very concept of segregating the deceased based on what religion they followed have the stench of bigotry? If a mother’s word is worthless, how could there be paradise under her feet?

Everyone was too emotionally consumed to invest anymore of their time and energy on anything but remembering Abbu. After a few mute arguments, it was decided to relieve the cleric of his contract and to proceed with the burial in the inter-faith section, as initially planned. Family members scrambled to find the right readings and rituals, and somehow we managed just fine.

Abbu was a practicing Muslim but he encouraged inter-faith harmony and practiced the norm of gender equality in all matters. He dedicated the last two decades of his life working on a project for providing education to girls in a slum of Karachi. I am sure he would have been proud of the decision that his wife and children made to honour his legacy.

A professional food scientist and a free lance writer who lives and works in Carmel, Indiana. He tweets @asimsyed23 (twitter.com/asimsyed23)