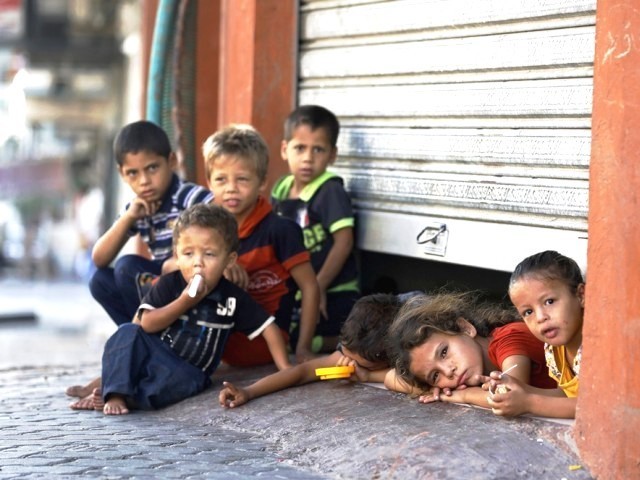 Displaced Palestinian children peak from under a shop door, where their family is taking shelter in Gaza City. PHOTO: AFP

Nothing remains but the ruins of hopes and dreams.
So much sorrow, so much suffering,
So long, somehow,
The sacrifices it seems were made in vain.

Every day is a tragedy,
Everyday a massacre,
There are no more tears left to cry.

Or so I thought…

Can you see?
Instead of a house, there are remnants of a home,
Like pieces of a dismantled puzzle everywhere;
A puzzle that will remain such with its remains strewn far and wide,
Together with the lives and existence of those who inhabited it.

Can you imagine?
There is a boy,
And the dream of that boy to be a grown-up.
His aspirations so pure, his thoughts so simple,
Made an orphan,
Now armed with a toy gun,
He seeks a familiar face. He finds none.
But he still has that dream, he fulfils it.

Can you feel?
He’s a grownup,
But there’s a price to pay,
That price will cost us our souls.

Can you hear?
Instead of children cheering at the fair,
There is a demolished Ferris wheel and the distant noise of explosives and gun shots.
Instead of fireworks in the sky, there are planes dropping bombs.
Instead of the sounds of laughter, there are echoes of people howling.
Instead of growing up, the boy is a grownup.
Instead of heading to the fair, the boy is now in heaven.

Dedicated to the people of Gaza – especially the children who are now orphans, the wives and husbands who are now widows and widowers and the parents who are now childless. May God give you the strength and the patience to cope and persevere.
And of course the martyrs of Gaza; may your souls rest in peace for the rest of eternity.

A Barrister and an Academic (BBA, LLB Hons, LPC, BPTC, M.Phil) who takes a keen interest in International Law and is currently doing research work which focuses on International law and its impact on anti-terrorism legislation.

Honouring heroes: A tribute to the men of Siachen

Pakistan: A state in denial