Yes, I don’t like watching football if Pakistan isn’t playing 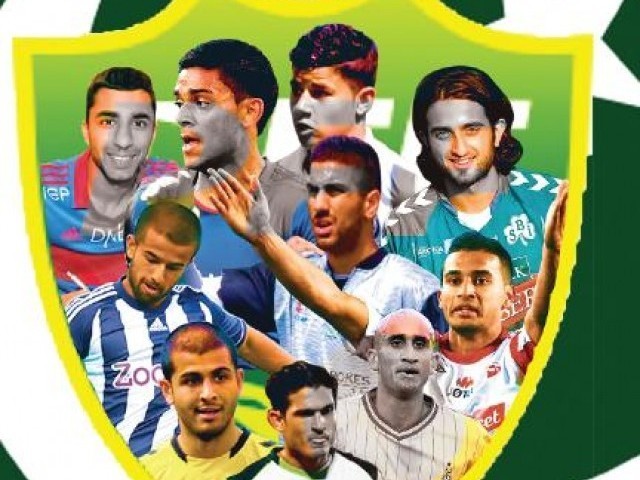 Seeing the likes of Adnan Ahmed, Hassan Bashir, Zesh Rehman and Yousuf Butt train, I could not believe that Pakistani players could be so skilled. CREATIVE: ASIF ALI

The FIFA World Cup 2014 was a sporting spectacle watched by everyone. From youngsters to elderly people, everybody’s eyes were fixed on the television as some of the best players in the world fought for eternal glory.

Seasonal fans came out to discuss the matches in detail, while some enthusiastic football critics even took to television to voice their opinions. I, too, watched the games and was amazed by the quality of football on display. But while everyone cheered Argentina, Netherlands or Germany on and cried tears when Brazil lost, I remained neutral.

Why wouldn’t I be?

My beloved Pakistan was not in the FIFA World Cup.

You see, I maybe a huge football fan and a dedicated Manchester United supporter, but my heart bleeds green for the Pakistan football team.

While others constantly debate about the attacking prowess of Lionel Messi or Alexis Sanchez’s transfer to Arsenal, I debate with my fellow comrades about Kaleemullah leading the scoring charts in the Kyrgyzstan League and why Pakistan’s coach, Mohammad Al-Shamlan, is ignoring our hugely talented foreign-based players for national team duty.

To the average football fan, this may sound absurd, border-line crazy even.

How can someone leave the crème de la crème of football to watch a team that many people don’t even know exists?

The truth is that, my inclination towards national football was not something that happened overnight. In 2009, during my days as a hardcore Manchester United football fan, who never missed a single game, I came across FootballPakistan.com that covered the Pak Shaheens in incredible detail.

Initially, I followed the team, but then I decided to link up with the site to aid the game in Pakistan. I watched our national team play in the FIFA World Cup qualifiers in 2011, where a 3-0 aggregate win for Bangladesh resulted in us going out on the first hurdle. That didn’t have a much of an impact and neither did watching Pakistan compete at the 2011 SAFF Championship.

However, the pivotal few days which changed my perspective on football were during September, 2013, in which I covered the SAFF Championship in Kathmandu, Nepal, and was an analyst on the official pre-match show.

Seeing the likes of Adnan Ahmed (Nelson FC), Hassan Bashir (Fremad Amager), Zesh Rehman (Pahang FA) and Yousuf Butt (Jaegersborg) train, I could not believe that Pakistani players could be so skilled. And believe me, I’ve seen my fair share of footballers in the country, but our foreign-based players truly blew me away with their abilities.

And then, in the opening game against India, I stood for the national anthem with goose-bumps all around and saw the Pak Shaheens putting up a valiant fight in a 1-0 unlucky loss, courtesy of an own goal. But we bounced back immediately in the next game, as I witnessed Bashir scoring a scorching volley to give us a 1-0 lead over Nepal in a 25,000 strong Dasharath Rangasala Stadium.

Let me tell you something, you may have experienced your favourite club or player score a goal; you may have seen Argentina or Spain score, but there is no feeling, and I mean no feeling, that can replicate what you feel when Pakistan scores.

That was the first time I felt like a true fan.

Every pass, every try at a goal and every tackle made me skip a heart-beat. But nothing in football could have prepared me for the agony of conceding an injury-time equaliser and I was in tears, with goal-scorer Bashir consoling me after the game.

My trip to Nepal ended on a high note as I saw Pakistan triumph over Bangladesh in a dramatic fashion. Being tied on points and goal-difference with India, we had a slender margin to sneak into the semi-finals of the 2013 SAFF Championship but needed a win against the Bengalis.

Things got off to the wrong start as we conceded early, but luckily captain Samar Ishaq popped up with the equaliser shortly after. It was an extremely tense game and approaching injury-time, I feared our luck had run out. I was sitting in the media tribune, surrounded by nearly 20 Bengali journalists, when Kaleemullah put the ball in the back of the net with just a few seconds remaining.

It was pandemonium. I was covering the game for thousands of people following on social media, but I couldn’t contain myself. I jumped out of the media box and ran towards the squad to celebrate. Even when I returned, I couldn’t type straight. The sheer adrenaline rush was unbelievable; I had never experienced anything like it.

Despite that nervy win, Pakistan was kicked out in the cruellest of fashions on head-to-head against India and we didn’t make it to the semi-finals.

That trip changed a lot for me. Sure, I like to watch a cracking game of football every now and then, I would definitely watch United in the upcoming season with Louis Van Gal in-charge, but for me, watching Pakistan and standing up for the national anthem is something that cannot be experienced in any other football match.