‘What is dead may never die’…except George R R Martin 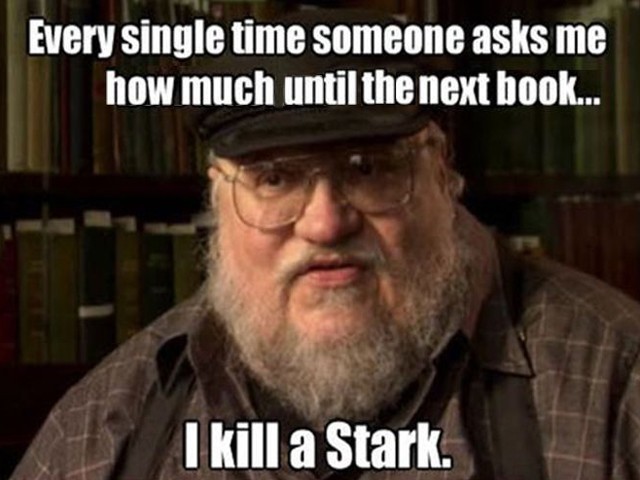 George Martin's publisher should insert a death clause in his contract that prevents him from dying before revealing who gets to sit on the Iron Throne in the end. PHOTO: PINTEREST

There is a rumour afloat that strikes fear in the hearts of millions. It’s not the reports of the brain eating amoeba or SARS or an exotic epidemic. No, this is much more critical, infinitely more blood-curdling horrifying. The rumour is that (hold on to your dear ones. If you are a misanthropic loner then a pillow will do) George R R Martin may not be able to finish the last installation of his ‘Song of Ice and Fire’ books which form the plot of the wildly popular TV show, Game of Thrones (GOT).

There, it’s off my chest.

The news has caused wide-spread consternation among the fans of the show, many who were barely over their grief from the Red Wedding. Others are experiencing severe withdrawal symptoms after the end of season four and are only kept sated by reruns and podcasts about the characters biographies on YouTube.

Is GOT the most popular show of all time? One can debate about it but would be hard pressed to name a show that has gripped the public in this way. For instance, one of my friends has given up his MBA programme and says he can learn all about the business world from his new mentor, one Petyr Baelish aka Littlefinger. Another speaks as if he was part of the plot with dialogues from the show. The last message that I received from him was that he is crossing the Narrow Sea and something about seeking the children. Since he’s not married, I hope it works out for him. Then there is one who goes by name ‘KP’ and plans to have a Westeros style wedding. We are trying to make sure the drinks are tested thoroughly and no one goes home purple and wheezing.

Given Martin’s predilection of pizza over the pen, the books have taken a while in coming and caused him to be approached by no less than four sumo wrestling managers. There was a six year gap between the fourth and fifth books and the series is supposed to end at seven. If he keeps up this pace, that’s 12 years total time and even though he started the sixth in 2012, we still have a decade till completion. At age 65, he’s not exactly the picture of health and fitness and the fans are very, very concerned. Unfortunately, this deep felt agony, this heart-breaking concern is for the books and does not extend to the author. Poor Georgie has gotten a tad miffed at the constant queries the fans directed his way about his completion deadlines and corpulence. I can imagine his irritation given that he experiences something like the following on a daily basis:

Martin: Why hello there! Top of the morning to ye! (In my musings he talks like a Leprechaun)

Fan: So you aren’t dying right? I mean it’s alright if you pop off after you deliver the seventh book and I get my fix of the show.

Martin: You (insert expletive of choice)!

A version of this conversation took place when an interviewer for the Swiss Daily Tages-Anzeiger questioned him about the possibility of his death. George’s response was,

“I find that question pretty offensive, frankly, when people start speculating about my death and my health, so £#@$ you to those people.”

In case the message wasn’t entirely clear, he then gave those people the finger. You cannot blame the guy for being bearish.

Annoying fans have been the bane of popular writers since time immemorial. I am sure Homer had his issues with the Achilles fan boys who would pester him about the end of the Iliad as he daydreamed about Helen. A wag told me that when writer Arthur Conan Doyle killed off Sherlock Holmes, he was hounded by Dr Watson lookalikes who had invested heavily in moustache wax, and he had to bring Sherlock back through a contrived series of events.

Some people have suggested that his publisher should insert a death clause in his contract that prevents him from dying before revealing who gets to sit on the Iron Throne in the end. One of the fans said,

“In my opinion, the contract forcing him to stay alive should have been made a long time ago.”

Literary critics agree that the penalties Martin would have to pay if he died before finishing the story could be ‘just too expensive for him to try and break the contract’.

The majority though are truly worried and afraid they will never know who Daenerys Targaryen will marry. In the event of Martin’s death, I expect their reactions to range from ludicrous to downright crazy. Here are some of them:

Some fans will simply refuse to believe that he will end his time in this world, and in case of death, will come back as a White Walker. They are relaxed and unconcerned about piddly issues of life and death.

There is a group saying that in the unfortunate event of his death, Martin will be frozen or cryopreserved so that future generations can revive him, thus insuring the plot end. TV executives tend to be a parsimonious lot and have countered the need to preserve his brain, saying they don’t want to put money into the body.

These are the sentimentalists and their grief shall have no bounds. Shakespeare had them in mind when he wrote,

“Oft have I heard that grief softens the mind,  And makes it fearful and degenerate”

They will lie comatose in a fetal position, only getting up to scarf down some junk food and watch the Battle of Castle Black.

They don’t watch the show, they live it and at Martin’s death, they will revert to their natural forms as denizens of Westeros. The costume industry will see a boom as we see a craze for long tunics and fake Valerian Steel products shall flood the market.

These fans will watch and re-watch the episodes looking for hidden clues and treat anyone who cannot remember all the houses and their vassals with disdain. The texts shall be treated as sacred and the search for the missing texts will lead to the 21st century version of the Grail quest.

They will claim Hodor as the messiah and form a religion around his personality. Anthropologists claim that ‘Hodorism’ will have a natural edge over other religions since all the prayers are essentially one word.

Being an occultist and naturally lazy, I am leaning towards the Hodorists and can see them claiming the Web Throne. So while Martin lives, let’s enjoy the books and the TV show. After that…Hodor!