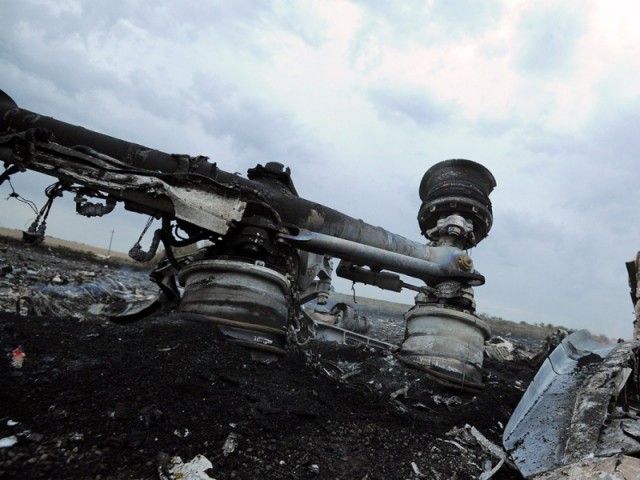 A man wearing military fatigues stands next to the wreckage of MH17 in Grabobo, Ukraine, July 17, 2014. PHOTO: AFP

On July 17, 1996, a Trans World Airlines (TWA) Flight 800, operated on a Boeing 747, exploded and crashed into the Atlantic Ocean near New York soon after it took off from John F Kennedy Airport. The flight was bound for Rome with a short stopover at Paris. The incident killed all 212 passengers and 18 crew members aboard.

This was the third largest air crash incident of that year, after the Garuda Indonesia Flight 865 crash, in which 272 people died, and the Saudi-Kazakhstan mid-air collision over Chakdari, India, in which 349 people lost their lives.

The remains of the TWA Flight 800 from New York to Paris that exploded off Long Island, New York, reassembled from recovered wreckage. Photo: Reuters

On the 18th anniversary of the TWA Flight 800 crash, a Malaysian Airlines Flight MH17 has been reportedly shot down by a Russian-made surface-to-air missile, killing 295 innocent people aboard a state-of-the-art Boeing 777, which was making its way home to Kuala Lumpur from Amsterdam. The flight was also code shared by KLM, a Dutch airline, as flight KL4103. This is the 14th aviation related accident this year, with still five months to spare.

Dozens of bodies scattered around the smoldering wreckage of Flight MH17 in eastern Ukraine. Photo: Reuters

This was also the second Malaysia Airlines Boeing 777 to be lost, in less than six months. Previously, MH370 disappeared in March while en route from Kuala Lumpur to Beijing and is still not found. The search for the missing aircraft has been expanded in to the Indian Ocean far west of Australia.

Less than a month ago, a Pakistan International Airlines Flight PK756 was shot during its final landing approach at the Bacha Khan International Airport in Peshawar. The aircraft survived the attack due to its low altitude; otherwise the lives of about 178 passengers aboard would have been at a serious risk.

A screengrab of the PIA Flight PK-756 that was attacked in Peshawar. Photo: Express

Over the years, a number of regions around the world have been considered as hostile for air travel. This has obviously caused trouble for the aviation sector as some very important aerial corridors lie in these hostile regions. This particularly holds true for the Soviet states, Iraq and Afghanistan. As such, it only seems pertinent for the aviation sector to find ways to travel through these regions without being hit or crashing.

As per International Civil Aviation Organisation (ICAO) standards, certain warning systems are installed to make the aircraft as safe as possible. At this time, all aircrafts are equipped with a traffic collision avoidance system (TCAS), which helps avoiding mid-air collisions. Not only Boeing 777 but all the series of aircrafts built by Boeing contain Electronic Locator Transmitters (ELT), which transmits distress signals in case of emergency. The civilian aircraft emergency frequency is different than the military aircraft uses. Therefore, technically, these aircrafts are well-equipped to call for help in case any problem arises.

A firefighter sprays down the wreck in Grabovo, Ukraine. Photo: Reuters

However, in the case of MH17, Malaysian Prime Minister Najib Razak, confirmed earlier that the aircraft did not make any distress call. Also, when questioned, he mentioned that no clue was found if MH370 was shot. This means that something is still lacking in terms of aviation security.

Is there a better, more advanced system that can be employed in aircrafts today?

The answer is yes. And it lies with Israel’s aviation technology.

Israel’s national carrier EL AL is considered as one of the most threatened commercial airline in the world. There have been eight noted hijacking attempts and attacks on the Israeli airliner. Flight 1862 became a ground reason for the airline to introduce strict and enhanced security measures to ensure the safety of the passenger, crew and their aircrafts.

During the Paris Air Show in 2013, EL AL, along with Elbit Systems, entered a new era of aircraft safety and introduced a device called the Directional Infrared Counter Measures (DIRCM), a system invented to protect aircrafts from infrared homing or ‘heat-sensing’ missiles. It is a lightweight, compact system designed to provide the highest level of security and protection to an aircraft from common battlefield threats. It is indeed a more advanced technology than the conventional infrared countermeasures.

This system was approved by the Israeli national program for protection of Israel’s commercial fleet, installing C-Music DICRMs on all of their Boeing fleet B737, B747, B757, B767, B777 and Airbus A320 platforms. While all relevant aircrafts will be fitted with the A-kit attachments, C-Music DICRM systems will only be provided to aircrafts flying to highly threatening destinations or such locations reported to be high-risk, based on short-term assessments.

At this point of time, as a neutral party, I see this as one of the most advanced, tested and reliable systems to help prevent huge losses of human lives, assets and most importantly, to avoid the catastrophic regional crisis that leads to further tensions. As we can clearly see, Ukraine and Russia are at the verge of confrontation while Malaysia remains the victim. Such protective systems might help us curb such conflicts.

An idea entrepreneur, a youth activist, a philanthropist, a policy advisor, aviation researcher, a speaker and a community worker from Rawalpindi, Pakistan. A graduate of journalism and political science from the University of Punjab, Lahore, he is currently pursuing an honors degree in brand management from the Foundation University, Islamabad. He tweets as @jawadmnazir (www.twitter.com/jawadmnazir)

GermanWings crash: Blame the pilot or blame the industry?

Dr Tahirul Qadri is at it again!