Did you know? 20 scientific inventions and discoveries that will blow your mind! 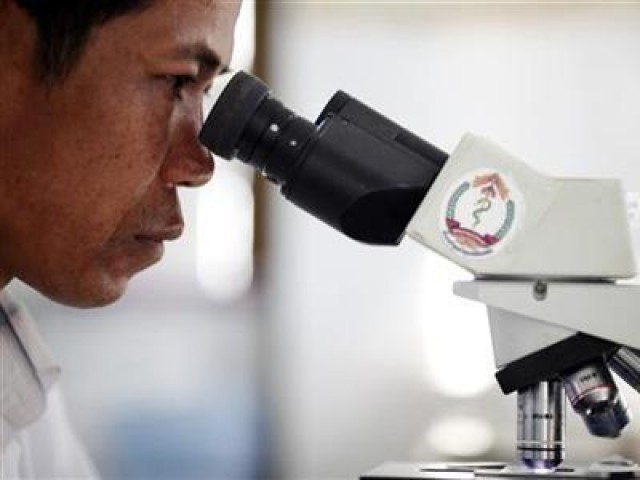 With all the sad news spread around us, we seldom turn our attention to the exciting scientific inventions and discoveries taking place across the globe, including our part of the world. PHOTO: REUTERS

With all the sad news of corruption, crimes against women, religion-based violence in our subcontinent, and the political tensions that keep taking place at the global level (like the recent ones we have witnessed in Ukraine, Greece and the Middle East), we unfortunately seldom turn our attention to the very exciting scientific inventions and discoveries taking place across the globe, including our part of the world.

Indiegogo, a company based in San Francisco, has developed a technology to convert roads into solar power houses. This was a hot topic of discussion on Facebook in June 2014!

Indeed, this would help check greenhouse gas emissions and reduce our dependence on non-renewable sources of energy like fossil fuels and nuclear fuels.

A solar-powered plane has made its debut flight in Switzerland in June 2014.

Aeroplanes running on solar energy would reduce our dependence on petroleum and help check pollution.

Google has released a car in May 2014 that has no steering wheel, pedals or brakes, and the only manual control would be an emergency ‘stop’ button.

Let’s hope his claims are true!

Makers Trident, a British manufacturing company, has launched a sports model Iceni that not only exceeds speeds of 200 km/hr but can travel more than 3000 kilometres on a single tank of cooking oil!

5. Bio-plastic from banana peels that can replace petroleum-based plastics

Elif Belgin, a teenage girl from Turkey, has invented the above, and won the ‘Best Science in Action’ Award at the Google Science Fair internationally in 2013.

Banana peels are a waste and this can help utilise the same, reducing our dependence on petroleum and would also be biodegradable, thus being less harmful ecologically.

6. X-Men style shoes that enable one to walk on the ceiling

This came to light in May 2014. It has been done by way of electromagnetism by Colin Furze, a British scientist.

Walking on the ceiling is no longer unimaginable!

One Washington-based company, Janicki Industries, designed a power plant that could feed off the waste from a small city to produce 150 megawatts of electricity, enough to power thousands of homes.

The University of the West of England, Bristol, has showcased a urine-powered fuel cell to charge mobile phones overnight.

These were exhibited at a Toilet Fair in New Delhi in March 2014.

Chapatis are integral to the meals of very many people in our subcontinent. A product of Zimplistic, a Mountain View, California-based company of 20 people, Rotimatic was developed over six years by co-founders Pranoti Nagarkar and Rishi Israni. Nagarkar handled the engineering, and Israni was largely responsible for the software side (there’s no operating system; it runs “bare metal”). Nagarkar said she was inspired to create Rotimatic after growing tired of trying to perfect her own roti-making skills! This came to light in July 2014.

This has come to light in July 2014. Scientists from MIT have developed a device consisting of metal plates that would condense water vapour and the water droplets, while contacting the metal surfaces, would produce electric charge that can be used to power electronic devices!

If this invention becomes affordable, one wouldn’t have to worry about plug-points and the sort of chargers we have today if one’s phone is, to use the colloquial phrase:

Developed by Japanese scientist Shigeharu Shimamura, this could be the solution to the impending global food security crisis. The wavelengths of light emitted are most suitable for plants’ growth, and there are no issues like droughts and weeds for such farms. This came to light in July 2014.

11. The cheetah is not the fastest terrestrial animal

It’s the Southern California mite, Paratarsotomus macropalpis. This came to light in April 2014. The general knowledge books will have to be updated accordingly!

12. Ants better than the Google search engine at processing information

A Chinese-German research team put almost everything that is known about the foraging of ants into equations and algorithms and fed this into their computers. When an ant finds some food in the vicinity of the colony, it takes a tiny piece of it to the nest, leaving a trail of a scent-emanating substance called pheromones. This is more efficient than even the Google search, an interesting fact indeed! This came to light in May 2014.

While insect-eating plants like sundew and venus flytrap were interesting enough, there are also plants that eat metal. One such plant species discovered in May 2014 is Rinorea niccolifera, discovered in the Philippines. This came to light in May 2014.

Scientists say that such plants can be useful to check soil contamination by ridding the soil of metal pollutants and even to extract metal by growing such plants in metal-rich sites and then obtaining metal from their shoots!

Indian scientists have discovered 14 new species of “dancing frogs”. Only the males dance – in a unique breeding behaviour called foot-flagging. They whip their legs out to the side to draw the attention of females who might otherwise not hear their mating croaks over the sound of the fast flowing perennial hill streams – the ‘splash zones’ they inhabit. The bigger the frogs, the more they dance. This came to light in May 2014.

Dance as a mode of attracting the opposite sex cuts across species!

15. Discovery of some new useful bacteria

You might be aware that all bacteria are not harmful, like the ones that curdle milk are not. Harun al Rashid, a scientist based in Bangladesh, has discovered a new species of bacteria, which could be of great help for the invention of high quality fertilisers. This came to light in January 2014.

16. New machine that can extract images from your mind

This came to light in May 2014. Researchers claim to have developed a revolutionary machine that can extract images from people’s brains and display them on a screen.

The powerful technology could one day be used to generate images of criminals from the minds of witnesses.

“Our methods yield strikingly accurate neural reconstructions of faces,”said Alan Cowen, a neuroscientist at the University of California, Berkeley.

17. Human blood can be prepared in laboratories

Stem cells can be converted into Red Blood Cells (RBCs) and White Blood Cells (WBCs), and the genetic programme to do so has been decoded by a team of researchers from the University of Wisconsin Madison in the United States, led by Igor Slukvin. This came to light in July 2014.

18. Breakthrough in the fight against AIDS

A major breakthrough has been achieved in the fight against AIDS by a team of researchers in the Temple University in the United States led by Dr Kamel Khalili. They have successfully shown that is possible to destroy an HIV virus in human cells. This came to light in July 2014.

19. Human hair can be used for making jewellery boxes, mirror frames and combs

London-based designers, Alex Groves and Azusa Murakami, have done so! They crafted the collection by placing strands of hair in a silicon mould which is filled with a non-toxic, sustainably harvested resin derived from pine trees.

20. Discovery of a new planet (not in our solar system)

If you remember your lessons from school right, a planet is a heavenly body revolving around a star, and the sun is among the countless stars in the universe, which has very many galaxies. Anyhow, the newly discovered planet referred to here revolves around the star Kepler 10-c. What is unique about this planet is that though it is very large, it is made of rock rather than gas (which weren’t earlier thought of as possible for such large planets) and has an atmosphere with thin clouds, suggesting the possibility of life. This planet has been named Mega-Earth and the announcement was made by the Harvard-Smithsonian Center for Astrophysics. This has come to light in June 2014.

Only if we were to think on scientific lines of fellow human beings as all belonging to the same species – homo sapiens, the world would indeed be a much better place to live in!

Indeed, ancient South Asia has many scientific achievements to its credit, which is a heritage for us to draw inspiration from. And yes, women shouldn’t for a moment think that they are necessarily inferior to men when it comes to scientific genius.