Pakistani women, cricket and their dilemma 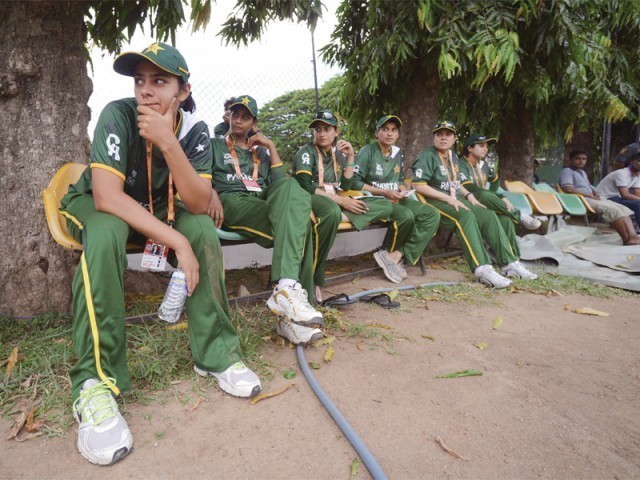 Many Haleemas suffer silently every day, at the hands of these heartless selectors and cricket boards. PHOTO: REUTERS/FILE

To stand in the sunlight, over the lush green grass of a cricket ground, surrounded by hordes of people cheering you on while you aim to annihilate the stumps with that ball in your hand is no longer just a man’s dream. Today, women too aspire to have a career in cricket and recent events have shown that they are very much capable of becoming great cricketers.

The Pakistan women’s cricket team made it to the limelight when the national squad won medals in the 2010 Asian Games and brought glory to their nation. This was a major milestone, not just for the cricket team but for women everywhere in the country. Before this victory, parents could never even consider allowing their daughters to participate in cricket. This win changed many perspectives and an increasing number of women are now allowed to engage in sports and think of having a serious career as cricketers.

However, struggles for the average woman are still aplenty in the world of professional sports. Our country is blessed with much raw talent that needs to be polished in order to be fully made use of. And it is here that our women face the greatest challenge. They have the talent and the wish to strive further, but it becomes hard for them to find someone who can harness their qualities. Every woman dreams to represent her nation with a star on her uniform but these dreams are often shattered when a selector unjustly rejects them.

After months of training, these women somehow make it to their district and regional teams, which is a glorious moment for them. From then onwards, they work towards playing at the national level, for which they labour day and night. Yet, on the final day, after the tests are done and the players are shortlisted, they find that their names are not on the squad list.

Can you imagine the pain they must feel at the time? After all that they have done, the same old players are seen representing the country. Why are they not given a chance, one wonders.

These women are harangued by many questions.

“Why I was not selected?”

“Didn’t I deserve to be in the national team?”

No one can answer these questions. Under the layers of a corrupt system, where selections are primarily based on favouritism and personal ties, their future is often mutilated and crushed. Selectors ask for undue favours and we also come across instances of sexual harassment.

This brings to mind the case of Haleema Rafiq, the 17-year-old cricketer who committed suicide a few days ago. She was one of the few who raised their voices against the injustices being done to them by the Multan Cricket Board. Yet, nothing was done to address her pleas. Instead, the board ended up filing a defamation lawsuit against her, bombarding her with a Rs20 million penalty, followed by death threats. This, eventually, became the cause of her dilemma that forced her to take her own life.

Many Haleemas suffer silently every day at the hands of these heartless selectors and cricket boards. Just because they sit in positions of power does not mean that they have the right to treat a woman like she is some commodity. Many talented women quit cricket just because of the injustices done to them. Others keep their head down and continue with whatever district team they are affiliated with.

To all these women I say, persevere. Speak out if you are being discriminated against. Focus on your destination and then remain steadfast in achieving it. There is no hurdle that you cannot cross. Your dreams are greater than their prejudices and misogyny. Your dreams are worth fighting for. Keep fighting till you end up in the middle of a cricket ground, with the crowds cheering your name and women everywhere following you as their inspiration.

She has done her Masters in Mass Communication from the University of Karachi. She used to play cricket and she has represented Karachi's cricket team in regional tournaments all over Pakistan.