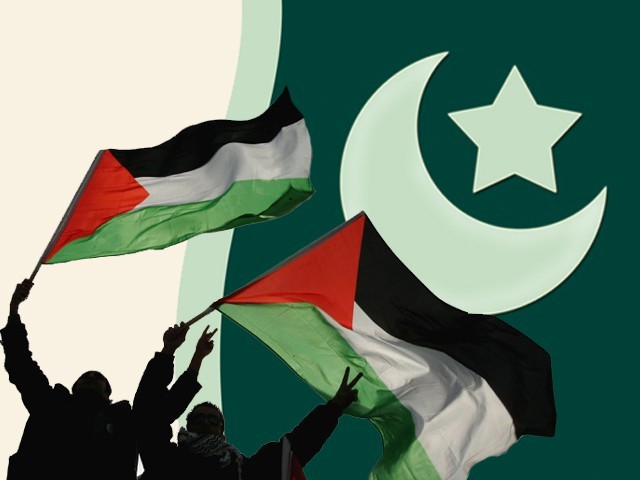 Until our own country isn't in order, we need to stop shouting at the world and focus on Pakistan.

I feel bad and a little guilty saying it, but I’m not interested in the Palestinian crisis. There, I said it. * Exhale *

I don’t understand this outpouring of emotions for Palestine on Facebook. How come there weren’t any well designed posters shared on Facebook when 10 people were shot by police forces in Model Town, Lahore?

Why wasn’t Facebook overwhelmed with emotional anti-Taliban visuals when they attacked Karachi airport? Were we sleeping earlier or are we just tuned to only hate Israel? Do things going kaboom in our backyard not make us flinch? Or are we afraid of criticising the Taliban because they might be next door (while the Israelis are a safe 4,000 kilometres away)?

Why is Palestine our problem when we have so many of our own?

Both Jordan and Egypt fought Israel but have since signed peace treaties and maintain full diplomatic and trade relations with Israel. But my passport still says,

“This passport is valid for all countries of the world except Israel.”

Here’s a quick history lesson for all of you. This “holier than thou” attitude of ours is nothing new. Almost 100 years ago, the Muslims of British-India started the Khilafat Movement to pressurise the British government to retail the Caliph as leader of all Sunni Muslims and ensure the Ottoman Empire retains its territorial integrity.

I find it hilarious that while the Muslims of British India were shouting themselves hoarse, Mustafa Ataturk inspired the masses and defeated occupying Allied forces and the Caliph’s army. He eventually got elected and the Caliphate was abolished under Ataturk’s famous, but not verifiable, instruction,

“The Caliph should be treated with utmost courtesy but must be out of Turkey before dawn.”

The Arabs rejoiced because they were in no mood to be ruled by the Turks.

But we kept shouting for the supremacy of Islam 4,000 kilometres away while the East-India-Company/British-Army was plundering our land.

A century later, Pakistan has more than its fair share of problems and I believe we should spend all our energy, resources and emotions to fix them. Israel is acting with impunity because it is economically and militarily strong. We too can conquer the world, including Israel, once our own house is on order. Until then, we need to stop shouting at the world and focus on Pakistan.

But we still don’t learn. Over the past few days, my Facebook feed has been taken over by the following variety of people:

1. The “kill all Jews” brigade

They put up a poster of Hitler with a (fake) quote saying,

“I could have annihilated all the Jews, but I left some of them to let you know why I was annihilating them.”

Past that, for some reason they still get upset when ‘ignorant’ Americans feel that all Muslims are terrorists.

2. The “Pakistan should attack” battalion

They put up posters with made up TV news tickers announcing,

Someone needs to remind them that the Pakistan Army is busy conquering Pakistan. Sorry, but Israel will have to wait.

3. The “boycott all Jewish-owned businesses” association

4. The “I will put up gory pictures” presenters

I do not want to see gory pictures of children bleeding.

Death and war is wrong and devastating and I’m sorry, but posting the picture on my newsfeed will not help your Palestinian cause. I don’t work in the Knesset or the White House (and I doubt anyone on your friends list does).

5. The “Israel is an illegitimate state” unit

They are so blinded by our rage against Israel that we lecture,

“Israel was created by stealing lands from the Palestinians. How can a foreign power decide to carve out a new country in the name of religion and displace the hundreds of thousands of people who were living there?”

Hello? Pakistan? 1947? Islam? 15 million Muslims, Hindus and Sikhs forced to leave their homes and property and approximately half a million people killed in the ensuing violence?

I love Pakistan to death, but let’s call a spade a spade. When we did it, it was okay. Woh karen toh sala, character dheela hai?

6. The “Israel is a racist state” troopers

They highlight how Palestinians/Muslims are discriminated against in Israel. Funny they missed the recent announcement by the Chinese government that people in government offices and schools of Western China are, allegedly, not allowed to fast during Ramazan. I see no calls for jihad against China.

This might actually be a hopeful sign where we realise that China is a strategic ally and we need to be nice to it, even if that means overlooking the occasional violation of religious freedom.

I hope this attitude takes root and we realise that the only interest is self-interest. Sab se pehlay Pakistan.