For the last time, Germany did not “rape” Brazil! 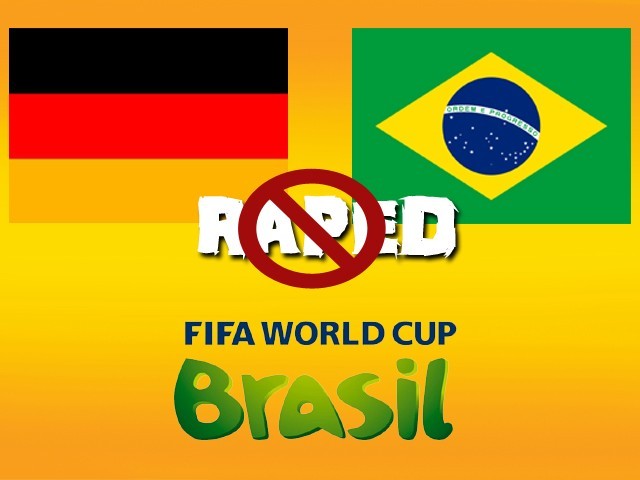 Using the term ‘rape’ so carelessly and heartlessly shows that either people aren't aware or have deliberately turned a blind eye to the poignant problem.

The whole world watched with a mixture of great shock, glee, anticipation and disappointment as Germany beat Brazil by an impressive 7-1 in the 2014 FIFA World Cup semi-final. As a long-time fan of Brazil, I too was quite appalled.

However, my dismay wasn’t because Brazil lost (it’s only a game after all, and countries win and lose all the time; it’s nothing new), it was more so due to the reaction elicited among many fans, especially over social media. They went so far as to state the most despicable of all metaphors in existence,

This inappropriate metaphor was especially ubiquitous over Twitter, where many people unabashedly and deliberately used the term rape over and over again. One only has to type the aforementioned phrase in the search bar to be suddenly bombarded with hundreds and thousands of repugnant tweets. It makes one wince at the amount of sexual violence that people, obliviously, are promoting, encouraging and taking very lightly.

Here are a few examples of those distasteful tweets:

Brazil is literally being raped by Germany. This is embarrassing, on their home field

On the other hand, there were a few who displayed much criticism and reprimanded the use of this atrocious metaphor, serving as a breath of fresh air after the mass of deplorable tweets that I felt were never-ending.

Rape is never funny. It's a barbaric act of violence against someone. Can we please stop the "Brazil gets raped by Germany" jokes? Thanks.

"When people say that Brazil was raped by Germany, they reinforce the dogma that a rape victim should be ashamed." #FoodForThought

While a plethora of these rape metaphors were rampant on Twitter, I also noticed that a debasing Facebook page was also created to further add salt to the wounds, titled, ‘I was alive when Germany raped Brazil’. Even more disturbing is the fact that this page has over 1000 likes and that too in a span of just a few days.

This begs the question that has been bothering me ever since I learnt about all this – since when did rape become a referral to something good? Something positive?

I am assuming that the people who used this reference meant to use it in the context that it was intended to be used; to mean that Germany was so good, talented and so powerful that they ‘raped’ Brazil, which obviously meant that Brazil was the ‘weaker’ team. After all, isn’t that exactly how ‘being raped’ works?

A powerful individual forces himself on a weaker individual, snatching and taking whatever he wants using threats and violence, leaving the victim helpless and humiliated. What’s even more disconcerting is that there are many who were completely dismissing this crude metaphor by calling it a mere ‘joke’ and making it seem like ‘it’s not a big deal’ at all.

How is it not a big deal when sexual violence, especially against women, is highly prevalent in Brazil? According to recent statistics quoted by The Independent,

“A woman is sexually assaulted every 15 seconds; murdered every two hours; 59% of people know a woman who has been a victim of violence; 65% of attacks on women happened behind closed doors.  It has the seventh highest rate of violence against women in the world and within the past three decades, at least 92,000 women have been killed inside their homes.”

I personally believe that the issue with people using the term ‘rape’ so carelessly and heartlessly is that they either aren’t aware or have deliberately turned a blind eye to the poignant problem of the prevailing rape culture and the fact that it’s not only prevalent in Brazil but all over the world.

Rape is not a joke and should never be treated as such.

Unfortunately, most of the people who indulge in such crude humour also don’t realise that rape in Brazil is excused when a woman wearing ‘revealing clothing’ gets raped. This is further supported in a recent article by Zeynep Zileli Rabanea, in which she states,

“58.5% of Brazilians agreed that if women knew how to behave properly, there would be fewer cases of rape.”

As distressing as the above statement sounds, it is the reality of the many problems that currently exist in Brazil.

So, to all you people who constantly use or have used the term ‘rape’ to refer to something ‘positive’, don’t use it! It’s not funny and it does not by any means sound cool. You can argue all you want and tell me that rape doesn’t sound bad, but the truth is that it does. It sounds very ugly and dehumanising.

Besides, there are far better and more appropriate words that could have been used instead to describe Germany’s win against Brazil.

Rape, however, is not and never will be one of them.