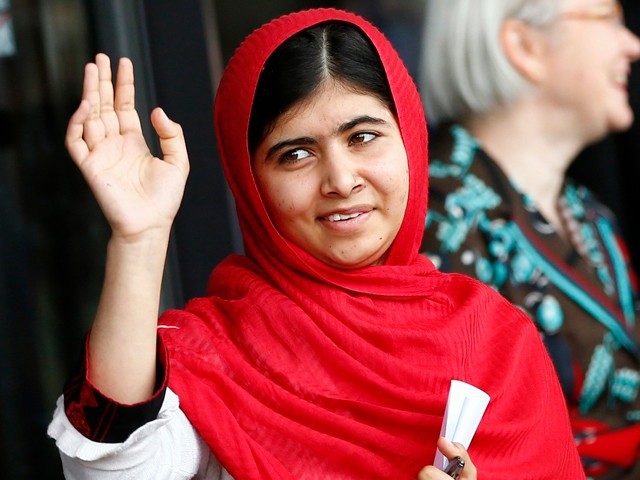 Malala stands for everything we want to see in the future for our women – a bright, confident, strong young woman who bears the love of land in her heart and wants nothing but positive things for Pakistan. PHOTO: REUTERS

In a recent social media diatribe (the ones where everyone’s faith is fired up or as a friend once put it, ‘angrily typing curses and calls for Jihad from their mothers’ basements in Bradford’, and anyone against these noble agendas is a spawn of the devil), an old friend descended to defend the ‘good Taliban’, opposing drone strikes and how liberalisation is ruining Pakistani people.

It’s almost mathematical; the kind of arguments that pile up in this side of the spectrum.

Aafia Siddiqui is the daughter of the nation.

Taliban don’t really exist – it’s all a smokescreen because America wants to invade Pakistan. In fact, Taliban are actually Americans. And then my personal favourite of them all, Malala Yousafzai is a Yahoodi agent slash drama slash American drone.

It’s so interesting and curious at the same time that we are willing to accept Aafia as the daughter of the nation, willing to go out on the streets for her release and believe in every story that comes our way about her ‘struggle’ in the United States. In the same universe, we have a minor by the name of Malala. She gets shot in the head, survives, recovers from a significant facial disfiguring and speaks in earnest about her struggle for education. The Taliban claim responsibility for attacking her and say they’d attack her again if they could, she jokes on Jon Stewart’s show that she often feared being attacked but she would often imagine a scenario where she would throw her shoe at the attacker to ward him off. Her case is clearer than most political ploys we get to see in our country, but for some very odd reason, Pakistanis seem to be hell-bent on proving that she is an agent and a source of humiliation for the nation.

The people who shot the 14-year-old, the same people who attack our schools, hospitals, airports and academies aren’t the source of shame. We can have lengthy debates about the ‘good Taliban’ and ‘bad Taliban’ on that matter. But when it comes to a little girl who wants to speak up about her struggle in finding a voice in a city that is being attacked and attempts to work against a credible threat that is slowly eating Pakistan from within, we are then open to thousands of interpretations. It could be anything at all. She could have Krang pulling the strings of her brain after that surgery in the UK. Or maybe, the Wizard of Oz is behind the curtains in her house in Swat. Heck, maybe her father is the criminal mastermind behind the attack itself.

For shame. For shame indeed.

I ask myself, is it misogyny?

Did she have a better chance of being believed if she was an ex-cricketer? Or maybe a television model?

Would she have had more supporters if she was from Karachi or Lahore? If she was from an elite class, who happened to raise her voice and was shot in the street for it? Would it have gathered more support from our Pakistani brothers?

Would she be loved if she was the daughter of some important political leader?

Is she disregarded because she speaks simply, doesn’t have an accent, wears a modest dupatta on her head, has little to no fashion sense and doesn’t appear frequently on Pakistani talk shows to indulge in the regular screaming matches about whose judiciary is it anyway?

Is this the formula to get noticed, supported and to finding a following? Be a madcap ranter from a rich house, and most importantly, be a man?

To this, I tell myself that no matter how much she could have fit into the perfect category of an activist, she is doomed to be ridiculed for her efforts in our country. There have been many who have fit the bill but have been taunted and humiliated, and even lynched for their ‘liberal’ or ‘free thinking’ ideals.

The Taseers were hounded about their personal lives after Salman Taseer was shot and Shahbaz Taseer abducted. Dr Abdul Salam won a Nobel prize but that wasn’t enough for Pakistan to forgive him for being an Ahmadi. We won’t care how big your achievement is. If the West loves you or even if you’re spot on the merit, we will make it a point to hate you. Because God forbid, we appreciate what we have, celebrate our heroes and make a mosque in the name of someone who truly deserves it.

We seem to have knee-jerk reactions to such situations. Burn and kill the person who just wants to talk about education and tolerance. Hail and laud the shady terrorists who attempt to violate every human right’s law.

What’s even more disappointing is that there are educated, enlightened, empowered, capable men and women across the Pakistani digerati sphere who have supported the idea that Malala is an agent and a source of humiliation for Pakistan. These are the people I am afraid of the most. They are the ones whose hate produces the strongest ripples. They are the ones with voices, with relatively independent opinions that they reach out; their hate has a Doppler effect. It’s more detrimental than the hate harboured by the many people who probably wouldn’t know any better unless a community leader told them otherwise.

The kind of screwed up morality we have going on in our psychosocial agenda is appalling. It is high time we began to climb out of our conspiracy theory shells and face the realpolitik. Pakistan is at an incredibly important crossroad at this point in time and the nation must recognise its true enemies.

Malala stands for everything we want to see in the future for our women – a bright, confident, strong young woman who bears the love of land in her heart and wants nothing but positive things for Pakistan. Set your differences and petty reasoning aside and support her. Join hands in celebrating strong women and fathers who support their daughters. Instead of calling them western puppets and shameful citizens, applaud them for their courage in standing up to threats to their lives and support their struggle in wanting to see a peaceful Pakistan.

Instead of doubting Ziauddin Yousafzai’s abilities as a father, see him for the educationist and activist that he is. Instead of spewing bitter comments about all the ‘credits’ they’re getting from western forums and media outlets, be glad that someone, an average Pakistani girl, is being celebrated for something positive.

Instil courage in your own daughters to stand up for what you believe in. Be happy that someone like Malala wants to be a politician (and that is not a dirty word, by the way) because that would mean that 10 years from now you can find a suitable candidate for your vote. Set aside your hate for Americans and Europeans, and celebrate your love for a beautiful little Pakistani girl who survived a bullet, random social media hate and the lack of support from her own brothers and sisters in Pakistan.

So here is to you, Malala. May you have a wonderful birthday, gain more strength and live long. I, for one, support you, love you, celebrate you and salute you. God speed.