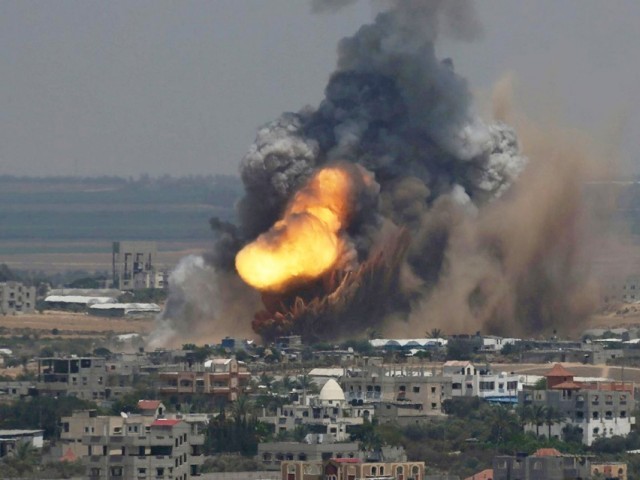 An explosion in Rafah in the southern Gaza Strip, after what police said was an Israeli airstrike. PHOTO: REUTERS

The past few weeks have seen a sharp rise in tensions between Israelis and Palestinians, following the tragic death of three Israeli teenagers and the consequent revenge killing of a Palestinian teen. The ultra nationalist zeal instigated by these recent events has led to a potentially catastrophic situation with a looming threat of an Israeli ground invasion of the Gaza strip.

By Wednesday, Israel had carried out close to a hundred airstrikes that had resulted in the deaths of over 80 Palestinians. Similarly, Hamas had fired over 300 rockets into Israel during the same period and called all Israelis “legitimate targets”.

As the escalations increase and the world splits between Israel and Palestine, it’s important to not only condemn any and all forms of violence but also highlight the ineffectiveness of violence as a means to achieve any resolution on the dispute.

Israel and Hamas are locked in a self-serving vicious cycle of violence, where each party’s actions not only hurt the other party but also legitimise a response. Hamas fires rockets into Israel that propels Israel to launch airstrikes into Gaza, which results in civilian deaths and that, in turn, helps legitimise the actions of Hamas and compels it to continue launching rockets.

Despite being a little too familiar with this cycle, we see few international efforts to effectively engage all parties in the region to come to a settlement. However, what we do see is an over abundance of propaganda from both sides to label the other as oppressive, terrorising and somehow intrinsically evil. These propagandists thrive on these cyclical events through which they continue to push for a clash of cultures and ideas.

However, the vast majority of Palestinians and Israelis have seen enough violence and conflict for a lifetime and it’s time to reconcile differences through socio-political dialogue. Few years of sustained dialogue between the Palestinian authority and the Israeli state have yielded better results for both parties than decades of violence and war.

And as the situation in Gaza deteriorates, let’s call on our collective humanity by raising a cry for peace. Let’s call on both parties, and not just one, to act responsibly and to put aside tools of violence and oppression.

Let’s hope that sanity will prevail.