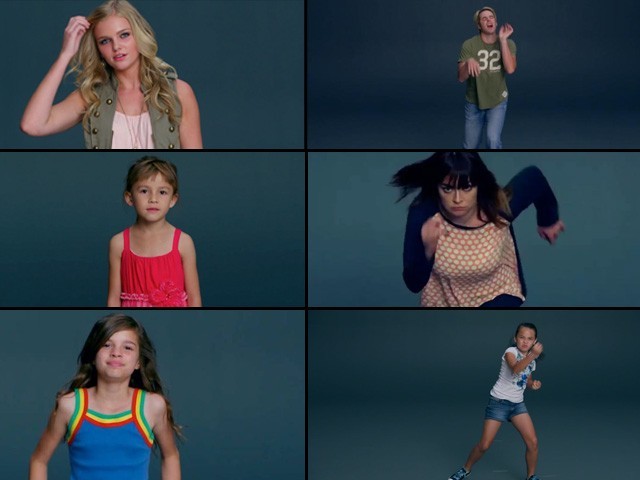 If you haven’t seen the new advertisement from the Procter and Gamble-owned Always, then you need to see it. This advert, which explores what it means to do something ‘like a girl’, topped the Campaign Viral Chart, bumping Activia’s Shakira video off the first place. It has been shared 536,519 times in the last few days, and it is definitely something everyone should watch.

Directed by the award winning filmmaker, Lauren Greenfield, who also directed the famous documentary, The Queen of Versailles, this commercial begins with a bunch of grownups entering the studio and being asked to demonstrate how to run, fight and throw like a girl. And the result is what you would expect: they start running, throwing and fighting inefficiently, showing weakness in all their movements.

Then a bunch of young girls are asked to do the same thing, and they, unlike the adults, throw and run powerfully. When one of the little girls is asked if doing something like a girl is a bad thing or a good thing, she replies saying that she doesn’t know what it means, but that,

“It sounds like you are trying to humiliate someone”.

Another young girl said that “running like a girl” means “to run really fast”. This goes to show, as the ad points out, that these little girls are too young and innocent to understand the pejorative connotations our society attaches with the phrase “like a girl”.

Then, the commercial asks the original group to reconsider, and this time, they run, fight and throw normally instead of moving shoddily. One woman at the end apologises and says she would run like herself if she was asked to run like a girl ever again. That moment was indeed heart-warming and that was when I vowed that I will never take this phrase as an insult again.

Throughout my teenage years, I have heard people use the “you do XYZ thing like a girl” taunt over just about any and everything. I remember when I first started playing throw ball at my school, I was told by my instructor that I should stop throwing like a girl, or else, I wouldn’t be able to make it to the school team. Then, when I started taking driving classes from a local driving school, I struggled a lot, and was particularly scared of roundabouts. After a couple of classes, my driving instructor asked me to man up, and not “chicken out” like a girl. He would try to be funny, and tell me how majority of the accidents in Karachi take place because women have started driving more frequently.

At a young age, I didn’t quite understand what this term meant, but eventually, I started feeling embarrassed every time someone would tell me that I do something like a girl. The saddest part arrived when this derogatory statement became a part of my everyday language, and I started using it as well. I would use “like a girl” to refer to something incorrect, weak, and idiotic without realising that I was disgracing myself by doing so. What I didn’t understand is that when you tell someone that she is throwing like a girl, you are telling her she is doing it incorrectly, and the correct way to do it is to throw “like a boy”.

There is a pejorative undertone which is attached with the statement “like a girl”, and this is a taunt based on gender differences. You are indirectly telling girls that they are not as skilled as boys and are inferior to them. By doing so, you are not only making them feel uncomfortable about their own gender, but you are also shattering their self-confidence. And this is exactly what the video made me realise. It served as an eye-opener, and made me take a step back and reconsider my actions.

Don’t get me wrong here; I am not trying to promote a particular brand. These companies are essentially profit motivated and they are willing to say or do anything that makes you buy their products. These women empowerment campaigns in brands are nothing new: some want you to stop apologising and ‘shine strong’, while others wants you to ‘feel beautiful’, and so on and so forth. Even though these adverts, in my opinion, are just a source of making money, I would rather have such commercials than those which support the sexist status-quo and make you take a shame-based guilt trip.

19. Foodie. Moody. Reading is my escape. Avid debater. A YES alumna, an AIESECer, and an intern at the Express Tribune. She tweets as @Wastiiii (twitter.com/Wastiiii)