Battered and silenced for standing up for education 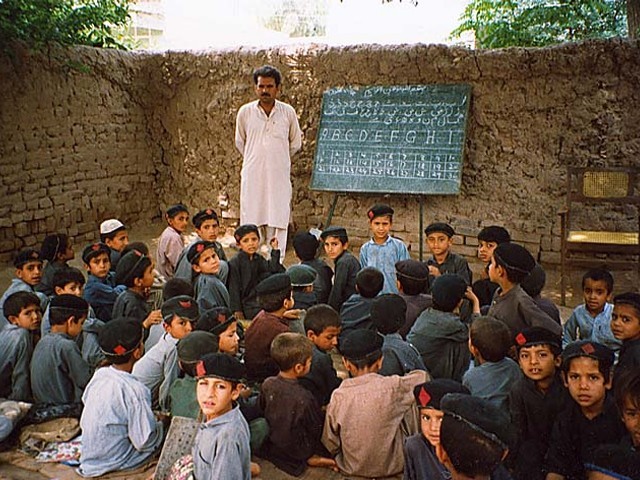 For the poor, education was either a waste of money, a threat to destroy religious beliefs or an obscenity to spoil their daughters. PHOTO: KHYBER AGENCY FACEBOOK PAGE

Munir*, a young man from a poor village of Southern Punjab, is lost in the flow of his erratic thoughts while being bedridden for the last two months now. He starts telling his story, carrying a reminiscent look on his face,

“I decided to join my father after graduating, to help him run the only school in the village. The thing that brought me back was my father’s commitment to the cause of education – which he had been doing so all by himself for so many years.”

Munir hails from a shabby village called Akbar Sahu, 216 miles south of Islamabad, and that is where he received his basic education. He currently resides there with his parents.

He asks himself time and time again,

“Did I steal, stab or say anything publicly blasphemous against any of the men in power to be in such a position?”

Munir vividly remembers the day from his childhood when he had asked his father a simple question, to which his father had replied in a fairly defeated voice – as he puts it. With a lump in his throat, Munir narrates,

“I asked my father how much it costs to run a nice school. After a considerable silence he told me that it costs more than what we can pay for. This was something I could not understand back then.”

Unveiling his story further, he said,

“My father started the only school in town about 20 years ago under a shade of a tree on a small piece of land that he inherited with around ten students. At that time, getting education was considered to be a luxury that only the elites could afford it. For the poor, it was either a waste of money, a threat to destroy religious beliefs or an obscenity to spoil their daughters.

To change the prevailing mindset, my father and I had to go through a lot of resistance which made it impossible for us to even stand on our feet, let alone talk about running a school. We wanted to help educate children and give them a purpose and direction in their lives. That’s all that we ever wanted, nothing more.”

Today, the school has a boundary wall and two other rooms to accommodate some additional students. But that is still not enough for all of them. Some classes are still being conducted under the same old tree, from where it started.

Discussing his own story with the school, Munir explained,

“As soon as I started teaching there, I realised that there were people in the village who wanted to buy the piece of land we had the school on, to expand their assets. We knew that it was just another strategy of theirs to put an end to the only educational activity being provided in the village. They wanted us to go back home and work in the fields.”

With helplessness screaming in his voice, he continued,

“The feudal lords of the villages were not happy seeing the young boys and girls sitting together and taking lessons within the boundary walls of the schools, away from their parents’ supervision. I tried negotiating with them, consulted the elders, lodged complaints and even wrote letters to influential people. But all my efforts went in vain.”

He went on to narrate about the day fate decided to strike its deadly blow on him.

“One day, when I was about to leave school to go home, I noticed a Land Cruiser loaded with gunmen, stopped outside the school gate. Four to five people, while holding axes and saws in their hands, barged in the boundary to cut down the tree (the same from where the school started), for no apparent reason. Being the only person left in the school, I tried to stop them from doing so but I was beaten up and hurled into the boundary wall so badly that my head started bleeding profusely.”

Running out of breath and trying to regain control, his eyelids contracted by a fraction of an inch to recollect the blurry details of the incident. He continued,

“It did not end there. I was determined to save the tree for the children and for the continuity of their learning. And they were about to cut it and end it all, branch by branch. But when I tried to get up, they took hold of me from my arms and legs and pinned me down on the ground. One of them came running from a distance and heaved his axe in between my hinges…”

His expression changed considerably; he seemed to have felt the same pain again while explaining the incident.

“…what they did was enough to take the life out of me and the tree but unfortunately, both of us had some more painful days to live. They beat me up to their strength’s end and the last thing I remember before fading out was shouting for help.”

Munir is still under observation with critical damage to his virility. Uncertain of his future and whom he should ask for justice, he is completely bedbound.

“Now I get what my father meant when he said ‘more than what we can pay for’.”

With tears in his eyes and a feeble voice, Munir went silent as he had his lunch handed to him.

*Names of persons and location have been changed to protect identities.

A project manager by professions, educationist by passion and a social activist by choice. Works for a social sector and likes keeping his fingers on the pulse regarding socio-political developments in Pakistan. Tweets at @You_A_Que (twitter.com/You_A_Que)